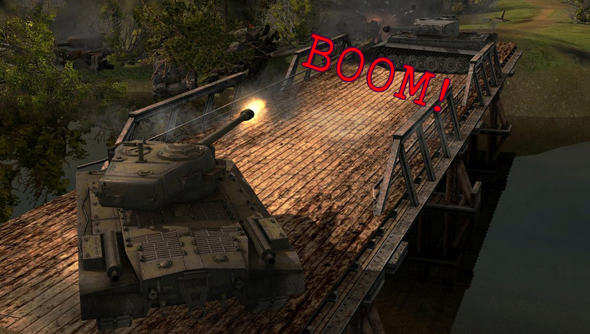 Yes, I’m well aware that World of Tanks launched two years ago, but I don’t give a damn. I think 2012 has been the year for this game, the year that it took great leaps forward, the year that we can say it grew up.

It was the physics that did it for me. I’ve always enjoyed World of Tanks


and there was a pleasant feeling of weight and power whenever I crashed
my way through another barn or casually rolled over the next stone wall.
Then, this September, the update to version 8.0 brought with it a brand new
physics engine, an engine which practically reinvented the game. No
longer did the steep gradients of the game behave like stone walls,
suddenly halting your progress in the most unnatural of ways. If it
looked like you should be able to drive off it then, by God man, you would
be able to drive off it, consequences be damned. My first few battles
with this new engine were absolutely wonderful, watching tanks leap off
ledges and even fly off cliffs. The careful tanker could, with a little
savvy and serious application of the reverse gear, navigate their way
down steep inclines that the game had previously told you were out of
bounds, while gathering enough speed and momentum could propel you up
slopes that used to be impassable.

It
can be so ridiculously slapstick, too, with tanks soaring through the
air before, inevitably, hitting the ground all too hard and fouling up
their suspension. Ramming now feels much better than it ever did before
and, with a little luck and some good timing, wily players can ram their
opponents down hills or even into lakes. And then there’s the occasional skidding. Have you ever seen a tank skid? I tell you what, it’s pretty sweet.

Just a few weeks later, another update to version 8.1 gave us a whole new tech
tree, introducing British tanks to the game. We’ve now got 21 of
those to play with and more tanks are coming soon, when Wargaming bring us a
selection of Chinese tanks in the 8.3 update. We are absolutely spoiled
for tanks and, apart from a handful of premium vehicles, they’re all still free.
That said, you will have to a a long time playing to work your way up
to the higher tiers, but you could also do as I do, which is completely
ignore the climb up the tech tree, keep most of your older vehicles and
just enjoy this as a game where you climb into a tank to shoot at other tanks. And
that, also, is why World of Tanks is my game of the year. The grind be
damned, it’s still an excellent game to play just for what it is. I
still have a bunch of tier 2 and tier 3 vehicles that I have a great
time with and I never want to get rid of them. I’ve got the German
Luchs, a scout tank that handles like a sports car, and the American T2
MT, which is such a good all-rounder that it’s earned me more medals
than any warrior could ever wear. They’re fine things, my tanks,
waggling their turrets and cannons at one another like plump, pissed off
daleks, and I can’t imagine ever getting rid of these cute little
self-propelled boxes of war.

I
suppose I should add a disclaimer here. Although World of Tanks is
free, I have actually spent some money on it. I’ve spent about £4.20
over two years and with that pocket change I’ve been able to buy extra
slots in my garage where I can keep more of my tanks. They’re like my
pets and whenever I earn a new one I just can’t bear to let any of the
old ones go.