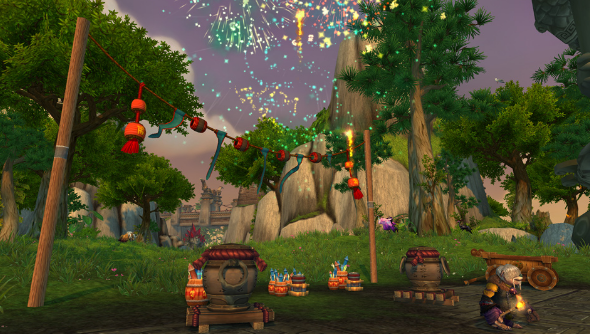 Through the years of World of Warcraft, you could say Blizzard have been pretty good at keeping players engaged. It’s not always been easy though. Lead Game Designer for World of Warcraft Tom Chilton has explained how new content has sometimes backfired on them as they failed to take into account changing player expectations.

“We shot ourselves in the foot when we removed the limit on the daily quests that you could do,” explained Chilton to us at Gamescom. “So there was a pressure to maximise everything… and that really leads [players] to burn out.” He concedes that the daily quest goals should be “more general”, allowing players to focus their efforts on other, perhaps more important areas.

Arguably the most upsetting thing for Chilton is players’ refusal to explore Azeroth, instead running straight to quest givers without taking the time to take in the beauty of the world. “I think we’ve really trained players over the years to say “If there’s no quest or mark on the map that tells me to go in that cave, I’m wasting my time.”” To combat this, Chilton is looking to resurrect the sense of discovery that players feel during their first hours in World of Warcraft. The Timeless Isle zone was designed specifically to achieve that. With different things happening at different times randomly across the area, players are forced to discover things for themselves without the aid of NPCs.

Chilton also recognised that some content didn’t backfire, but required Blizzard to wait for player attitudes to change. Pet Battles was the big example. “Overall we’ve been super happy with it. The response we’ve gotten to it compared to archaeology is just night and day. I think a lot of players went into it being very sceptical, and ended up becoming completely absorbed into the whole pet collection and levelling up gameplay.”

The pet battles are the perfect demonstration of how Chilton judges the success of any new content. “We’ll watch the level of engagement, we’ll see how many players are doing the content, whether or not they’ll continue to do the content, how long it lasts and then we’ll also evaluate it as players ourselves,” he explained. It’s a system that seems to have worked well enough to keep World of Warcraft a remarkably fresh experience for eight years. Blizzard may have stumbled and shot themselves in the foot a couple of times here or there, but for most of WoW’s life to date, Azeroth has provided plenty of player-pleasing content. It’s a trend that doesn’t appear to be stopping anytime soon, with Siege of Orggrimmar on its way.

{"schema":{"page":{"content":{"headline":"Blizzard talks the mistakes of training players to hunt for quest markers, and how pet battles won the hearts of the community","type":"news","category":"world-of-warcraft"},"user":{"loginstatus":false},"game":{"publisher":"Blizzard Entertainment","genre":"MMO","title":"World of Warcraft","genres":["MMO","RPG","Subscription"]}}}}