One of the hardest things about running a perpetual world like Azeroth, aside from the server stuff and cutting all that grass, has got to be explaining away the new bits that pop up from time to time. Pandaria? There all along, but hidden by magic. The Timeless Isle? Tends to pootle about through space/time, like that one in Lost.

Yes, that’s the new landmass come to WoW in its Siege of Orgrimmar patch – a temporally on-the-blink retirement home for Pandaren monks. There one moment, gone for 1000 years the next. Right now, it’s sitting off the coast of Pandaria, pockmarked with caverns, underwater grottos and the promise of “open-world adventuring at your own pace”.

The island is one big Blizzard design experiment – home to only a couple of quests, both of which will categorically fail to tell you where to go or what to do. Instead, they’re there to encourage solo exploration across the isle. While difficulty will increase as players drift away from the Pandaren temple grounds and toward the faith-and-brimstone of the Ordon Sanctuary, the dev team want your wanderlust to be uninhibited by the spectre of death and the accompanying gear degradation.

“As this is an open-world experience, everything except the raid bosses is designed to be taken on solo,” they write. “See a level-93 Elite? Attack it! Depending on your spec and gear it may take you a while to whittle down its health, but your ability to skillfully play your class and dodge attacks can lead you to victory.”

Reason being, Blizzard intend for players to return to the Isle with new characters long after the patch release rush has dwindled and still be able to explore the island in its entirety alone. 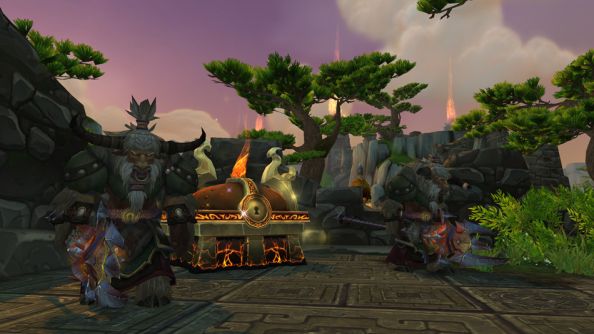 In support of all this, the developers have also introduced a new event system – the Event System – which takes a frozen leaf from Skyrim’s book. Whenever players find themselves within a close radius of the Isle’s many rare spawns, Elites or epic loot chests, a notification will appear on their minimap denoting their location and type.

“Some won’t be simple to get to or easy to find, as many parts of the island are entangled with puzzles lost to time,” write Blizz. “Some involve more than a simple alert… but we’re not going to spoil the surprises, and we’re really looking forward to see how quickly players can unlock the island’s mysteries and hidden treasures.”

The Timeless Isle may be a solo experience, but that doesn’t mean you won’t be encountering other players. A unique PvP opportunity will see players voluntarily joining the flaming Ordon faction, gaining access to the powers of the Censer of Eternal Agony – but also flagging them as a target to everyone in the area. The effect won’t be quite the same on PvE realms, obviously – but players can still choose to engage with flagged players if they like for a unique currency exchangeable for exclusive rewards.

Speaking of currencies, the Timeless Isle has its own – Timeless Coins, used to buy Mogu Runes of Fate, additional BoA gear, pets, mounts, and various nick-nacks.

“Whether you’re a newly level-90 player, a fully geared raider, a pet battler, a PvPer, or anything in between, the Timeless Isle features something for everyone,” claim Blizzard. And from the sounds of it, they’re right. What do you reckon?