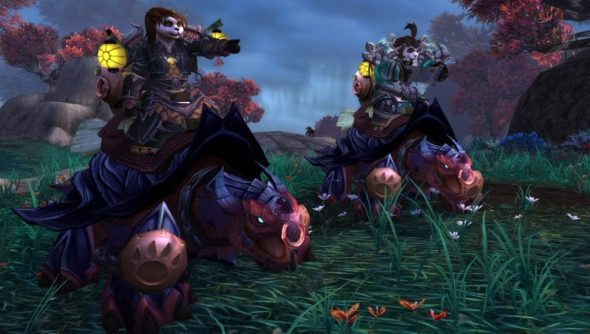 Dragons are in everything. Shows about thrones, games about the sky. In the Mists of Pandaria even turtles will have dragons in them, and pandas on top as well. The upcoming WoW expansion’s new race’s mounts are a creature of Chinese fable: the Dragon Turtles.

The lumbering conveyances of the Panderan’s are built for the ample frame and slow pace of the monochrome passengers. The dramatic testudines, representing a mix of two of four of the celestial animals of Chinese mythology, look like turtles with some serious armour bolted to their hides, and are said to be able to carry “maps, cushions, footstools, and brew-storage.”
But then Blizzard recant that, because it has no bearing in how they’ll play, so really all we have is the name and the fact that they’re a bit slow and that the Pandaran’s like them because they’re a bit wobbly and need a steady base. Looking at the screens, there’s no suggestion of fire-breathing or the power of flight, so expect it to be more turtley than dragony.