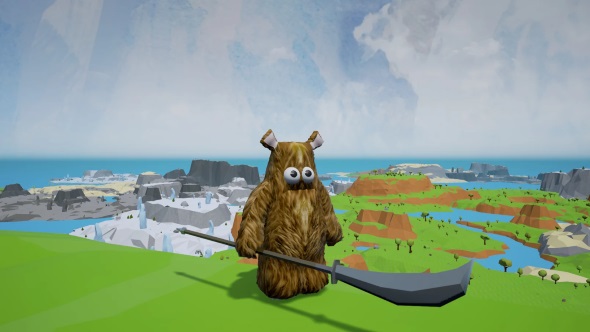 Survival games are certainly a mixed bag, but Don’t Starve is one of the stand-out good eggs. Indeed, it’s often surprising that more developers haven’t been influenced by its spin on the genre. That’s why Wrongworld could be a survival game worth looking at, since developer Sludj Games cite’s Klei’s Burton-esque title as its chief inspiration. Albeit trading in the gothic cartooniness for kids-TV-show-on-acid, apparently.

Sludj is the studio front for British developer Jamie Coles, and that Britishness seems all the more apparent in the game’s Douglas Adams-ish plot: a nameless creature (who appears to be some kind of intergalactic teddy bear) has an accident on the way back from going space shopping, and ends up stranded on a weird alien planet. Such a nameless hero must now survive in his new habitat, and either create a new life there or re-build his spaceship in order to escape. Naturally, it will be you as a player controlling this bear… thing.

The key features of crafting, exploration, and combat will all be present and correct, and of course the hunger meter will manage your every waking second. And, should the game make it onto Steam by way of Greenlight, Sludj plans to have an early access build available in Q1 of 2017. So, soonish, basically.

Like what you see? Give it the good ol’ thumbs up over on Steam.