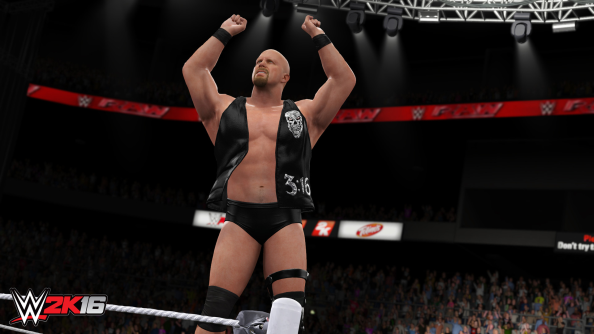 He’s had that name for decades, but you haven’t truly seen Steve Austin stone cold until you’ve watched him freeze up a splash screen for potentially infinite periods of time. WWE 2K16 came to PC this weekend, but a couple of painful bugs have kept some from entering the ring.

Looking for a bigger arena to play in? Try one of the best sandbox games on PC.

The Steve Austin screen has left players stuck in loading, before even reaching WWE 2K16’s menu – but there are a couple of potential solutions doing the rounds.

Some have found success simply by alt tabbing out, alt tabbing back in, and giving the game a minute to come to its senses. Others have worked around the issue by running the game as an administrator from its install directory.

Elsewhere, there’s a pinned thread on the 2K16 subreddit about performance on laptops. Apparently the game has been defaulting to integrated graphics cards rather than using any Nvidia GPUs available.

The solution involves navigating to the Nvidia Control Panel and adding a ‘program to customize’ under the initial tab. From there you’ll want to find your way to 2K16’s files under \steamapps\common, and select ‘High-performance Nvidia processor’ as your preferred option for the game.

Beyond that, some are experiencing crashes and slowdown during the more elaborate, pyrotechnical entrances. Not the kind of fireworks 2K intended for their Steam launch. Do let us know about your own issues in the comments.