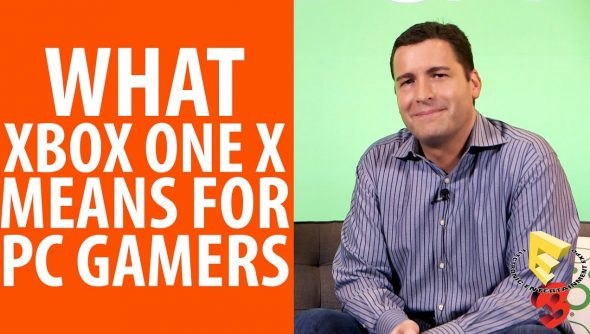 Mike Ybarra, corporate vice president of Xbox and Windows at Microsoft, spoke to our Rich to chat about the Xbox One X and what it means for PC games going forward.

For more of the latest in PC gaming, check out our homepage for the latest E3 2017 announcements.

Ybarra seemed more interested in hyping up the Xbox One X in general when asked about what the upcoming console means for PC gamers, remarking that “For PC gamers, if somebody wants to play PC games on their TV in their living room, the best 4K games they get in high-value PC game systems today, this is the box for them to get.”

When asked directly about the Xbox One X and specifically what it means for PC gamers as a whole, however, Ybarra had considerably less to say, mentioning boons we already knew were coming for developers looking to embrace the Xbox Play Anywhere program such as 4K textures in Windows, 21:9 resolution, and AMD Crossfire support.

He noted that the kind of optimisation and unified tools across Windows and Xbox development make it simpler for developers to bring their games over to the Xbox One X console, with the mindset that games already existing on PC are so simple to bring to broader audiences now that developers may say “let’s go ahead and do that.”