It was called Enemy Unknown, and for a little while it was just that – full of nasty surprises. But in the three years since Firaxis’ XCOM reboot, its catalogue of sectoids, mechtoids, mutons and chryssalids has become known to us. The revelations that were plasma weaponry and jetpacks now pre-planned steps in a tech tree.

The first shock of the sequel has been in returning to that state of ignorance. By ending the resistance a short way into the original game’s campaign, and then fast-forwarding into a future where the aliens won, Firaxis have returned the mystery to XCOM. This is a game where research yields true discovery – game-changing breakthroughs and unpalatable truths about ADVENT, the administrative facade that watches over Earth. Where well-sculpted soldiers fall foul of enemy behaviours you couldn’t possibly have predicted, but will never succumb to again, such is the memory seared in your brain. Little is familiar on a battlefield where psionics come as standard and even sectoids scare simply by standing upright.

Yet just as much as I’m desperate to tell you about the fogginess of XCOM 2, I want to praise its clarity. For all Enemy Unknown’s winning simplicity – two moves per turn, two types of cover to dive behind – it was tough to know with total precision what the outcome of your orders would be, and frustratingly easy for even a veteran player to disturb a flock of floaters without fully understanding what triggered them. 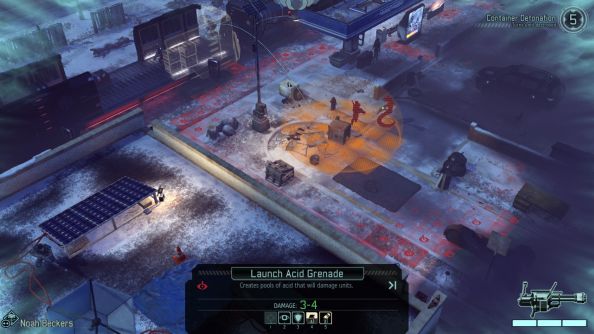 From the off in XCOM 2, you’re making decisions based on new on-screen information. Beginning a mission in concealment, as you most often do, you can see exactly which tiles are going to alert the enemy to your presence – a cluster of squares around a CCTV station, a brainwashed civilian, or a mobile patrol unit.

Bright red exclamatory eyeball icons are there to remind you of just how much of a racket the route you’re planning through the nearest window is going to make. And, oh my goodness, gone are the early resistance days of forgetting to remember which enemies are in overwatch. That’s on your display, and particularly important now that you can strip a soldier of their shot readiness by chipping part of their health away rather than risking a sprint.

For the most part, Firaxis are formalising rules that have existed since 2012. But the new clarity means you spend more turns acting purposefully on the information in front of you, and fewer swearing and crossing your fingers as a squaddie’s movement cam unexpectedly goes into slow-mo. 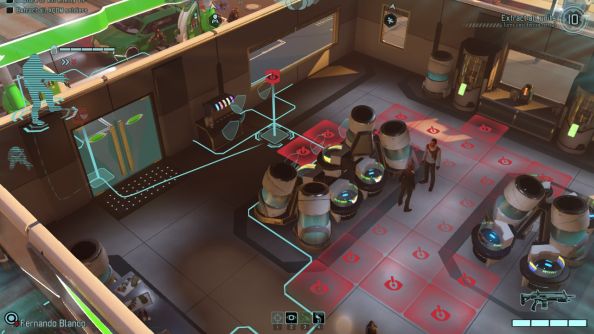 That’s one reassurance to hold onto among all the discombobulation. Another is the pacing; there are equivalents to most of the major beats in an early XCOM campaign here. Expect to find a new source of income by protecting a particular region of the planet, and to make an important advancement as a consequence of raiding an enemy base. You’ll no longer be sidling up to sectoids and knocking them unconscious for interrogation – but you will be pulling off the same moves to stick a ‘skulljack’ into the pate of an enemy for a different, plot-crucial purpose.

None of which feels lazy – rather an attempt to insert some recognisable punctuation into a campaign structure that’s otherwise wholly different.

Firaxis have reinvented the globe, squashing the geoscape into a scrolling atlas. It’s not a change that concerns geographers alone. If you ever span XCOM’s planet on its axis, it was likely only out of curiosity – the game automatically centered on any event worth your attention as it happened. In the sequel, by contrast, you’re far more proactive. On any given day, you’re looking to relocate the Avenger, your mobile base and former alien transport ship, to a spot that promises more gains. 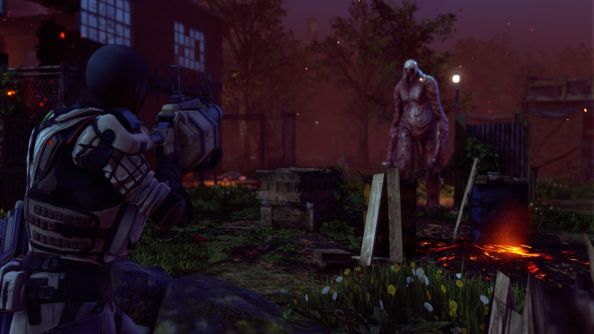 You’ll be zipping across Earth to investigate reports of an ADVENT convoy, or a pool of potential recruits, or a resistance clinic which might lend the ship a few extra power cells. Everything takes time – days of scanning, in fact – so you’re often picking destinations to match the timing of research and engineering projects going on inside the Avenger. You might decide to travel to the black market and sell off some unwanted sectoid bodies, say, so that there’s enough dosh to fund Chief Engineer Shen’s experimental ammo once she’s done producing spider suits. What you don’t want is to be parked up, fast-forwarding your projects to completion – not when the metagame has been infused with new urgency.

ADVENT don’t sit about either, instead working towards an Avatar project – an effort shrouded in secrecy, but which Central Officer Bradford intimates will require you to load an earlier save should it be finished. The project’s progress is measured by an ominous progress bar on the geoscape, which quickly fills if you’re not actively pulling down facilities in response.

The Avatar project can’t be stopped; only stalled. Though this ragtag, returning XCOM intends to be a real threat to ADVENT, it starts off only as a nuisance. That theme’s apparent too in Dark Events – the planned alien tech upgrades you can attempt to thwart via Guerrilla Ops missions. Ops are presented as discrete choices, like Enemy Unknown’s Abduction missions, so you can’t prevent everything – only pick what you can’t stomach. 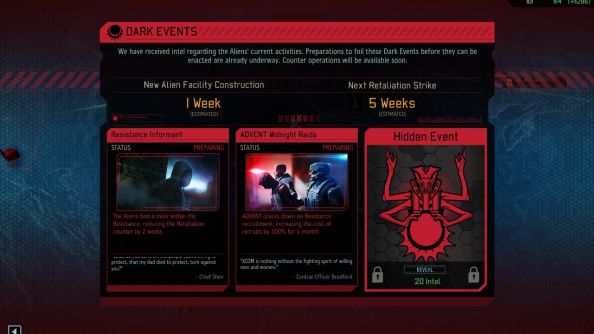 I foiled ADVENT’s designs to line their armour with permanent padding, but let slide the better threat response procedures that guaranteed more enemy reinforcements over the next month’s missions. Later, I’d lose a crack grenadier to a second wave of soldiers and trace the death back to that decision. It’s XCOM-standard cause and effect, ticking along with that newfound clarity.

By midway through a campaign, you might be facing ADVENT soldiers armed with poisonous ammo, or patrols trained to spot your cloaked commandos, or UFOs designed to take down the Avenger. An enemy you’ve inadvertently shaped yourself.

Let’s talk about those reinforcements, actually, because there’s a sense of hurry on the ground in XCOM 2 that wasn’t found in Enemy Unknown. While most missions are started in stealth, you’re usually discouraged from creeping tile by tile through the map by timers – like the forced extractions that necessitate all of your squad reach a 3×3 square or be captured. And the longer you’re around, the higher the threat of an extra shipload of enemies – a possible death sentence to a team likely already low on hit points and grenades. 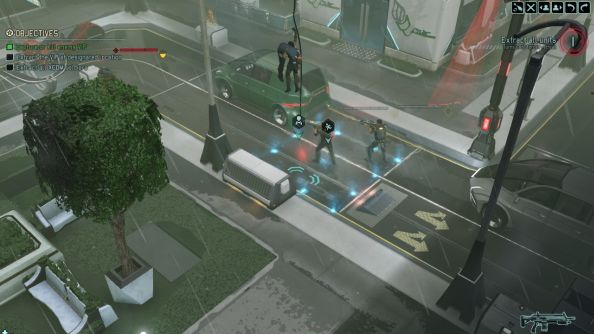 In a roundabout way, reinforcements fulfil the promise of the XCOM shooter prototype that became The Bureau. You won’t always have the luxury of clearing the map; often you’ll be nabbing railway cargo or a VIP before hightailing it back to the skyranger. You’ll regularly be forced to calculate your chances of securing the objective and bundling every last rookie into the ship before ten troopers come down on your position. And sometimes you’ll get the maths wrong.

One of the more fundamental changes to XCOM’s tactics component is the fact that all of these maps are now procedurally generated. It’s testament to Firaxis’ ability to algorithmically blend authored segments that I simply haven’t noticed the difference yet. Perhaps the lines in the jigsaw will become more apparent with time; perhaps that brave new metagame will reveal its own flaws, just as the early satellite rush and endgame difficulty slump of Enemy Unknown’s campaign became visible through repetition. There’s still the potential to find hidden horrors in the fog of war between here and February. But it’s hard to imagine anything that might spoil this bold reversioning, this disavowal of the sequel as a mere iterative upgrade. Firaxis have built an XCOM they can claim entirely as their own, and it’s full of nasty surprises.