The chance to play as the aliens in XCOM is one of the most frequent community requests, but creative director Jake Solomon is sceptical that it could be made to work.

Should you pick it up? Jeremy gives it the nod – check out his XCOM 2: War of the Chosen review.

Speaking in an ask-me-anything session on the eve of XCOM 2’s new expansion, War of the Chosen, Solomongave a lengthy answeron the subject:

“Here’s the thing I’ve never been able to get over when thinking about ‘Playing as the aliens.’ Is my emotional connection to my avatar/soldiers/base going to be strong enough to propel me through 30 hours of gameplay when it’s not recognisable as human or earth? There always has to be some projection of the player into the game world, and to make a narrative that’s compelling (both the scripted narrative and the narratives that the player makes up in their head) the player has to be able to emotionally connect with the actors in the narrative.

“Being an invading alien race could definitely be fun for a few hours, but more than that and sustaining emotional interest in the fantasy would get hard. Not saying it can’t be done. Anything can be done. But I personally think it would be very, very difficult, and might require more scripted narrative than we typically like to do in order to foster some emotional investment from the player. I think that’s why I sometimes hear players yearning for the world of EU. Because it was set in a very recognizable world where emotional connections were easy.”

Emotional investment in your squad has always been one of the most important tricks that XCOM plays, and War of the Chosen plays it anew with features such as propaganda posters and soldier bonds. It’s not surprising to learn how important this is to Solomon’s designs. 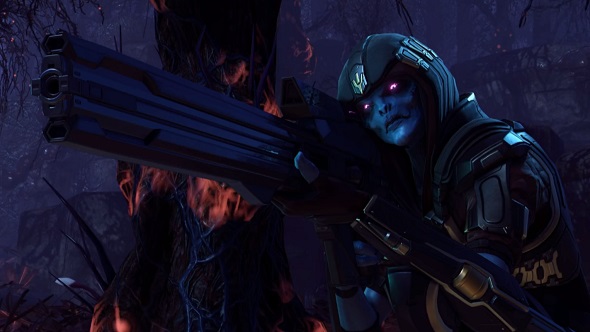 The AMA covered several other subjects with other members of the dev team. Asked what features he’d like to add if money and time were no object, designer and programmerJoe Weinhoffer says“soldiers speaking to one another in the middle of combat and commenting on their actions is a system that we’ve wanted to add for a long time, but is both very expensive and technically challenging. We got pretty close in WotC with the Chosen’s snarky remarks, but it would be great to extend that to soldiers in the future.”

Asked if he’d ever wanted to do a Civilization IV: Colonization-style spin-off, focusing on a micro aspect of the XCOM universe,Solomon says“Hell yes. I’ve always wanted to make a campier X-Com set in a single small town, with more of a horror movie vibe to it. Take all the systems but shrink them down to a much smaller scope. Easier said than done, but I always love thinking about it.”

Finally, we’d noticed that War of the Chosen’s cast includes a number of actors from Star Trek: The Next Generation, but Solomon explained “it’s a total coincidence that so many actors from my single favorite show of all time showed up as voice talent in War of the Chosen.” So that clears that up.

You can read the entire AMA on Reddit here.