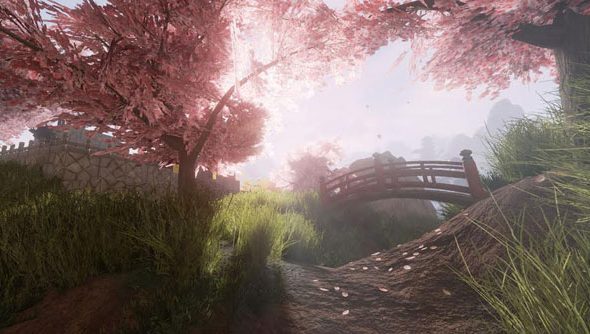 If there’s a sensation that comes easy to first-time VR users, it’s discomfort – and an early wave of developers have taken to the technology with the aim of unseating their audience. Valve have experimented with vertigo, and Rift-owning indies are racing to build claustrophobic horror games like Caffeine.

White Lotus are doing the opposite. Rather than accentuate the disorienting effects of virtual reality, they’d rather pitch for peace and serenity. Welcome to the afterlife: it’s got puzzles.

In Xing, the newly dead wake up in the clouds. That’s good news for theists – but potentially bad news for those with a fear of heights.

“We want people to feel really good up there, and that it’s interesting and mysterious,” said designer and artist Koriel Kruer. “But it also is very high. We’re really trying to make sure that you don’t feel scared or sick. We’re trying to take all of that stuff into account when designing environments.”

White Lotus take their role as early colonisers of VR seriously. They know they’re going to leave impressions on people – first impressions about the medium that might stick.

“Our game isn’t about being scared,” said co-developer John Torkington. “You should never feel scared in our game. It’s a challenge to avoid that. Because it’s very easy to naturally go into things that are frightening.” 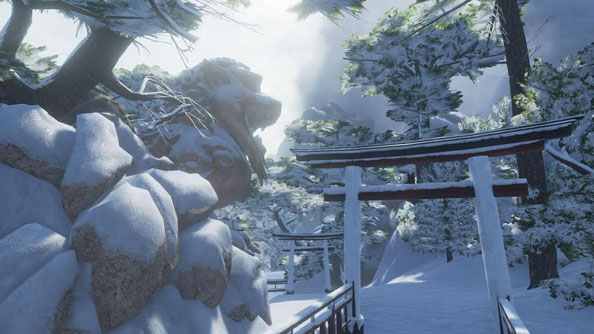 “We know when things are getting uncomfortable,” said Torkington. “There’s going to be a huge variety of people trying this game.”

The game they’ll be trying is an exploratory first-person adventure. Players take on the role of a bodyless spirit new to the afterlife, and drift through a series of mystical lands. Along the way, they’ll look for answers to the big questions: what’s this whole afterlife thing about? What are its rules? Is there a moving on? And how do I solve this puzzle anyway?

“We’re not necessarily going for, ‘You’re being tested’, but you’re trying to get a greater understanding of the world,” said Torkington. “And so you explore your environments and you gather up the pieces – fragments, almost, of who you were and what it means to be dead.”

If you think you can feel the influence of Myst descending, you’re right – but White Lotus also cite contemporary inspirations like Portal and The Talos Principle. 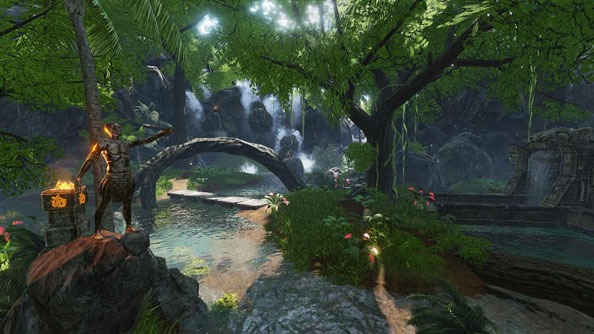 “The main difference between our title and the Myst series is probably that we’re not so much focusing on these broad stroke puzzles that encompass entire lands, where you’re running around trying to find buttons and weird switches,” said Torkington. “Ours are more the Zelda dungeon style – although I don’t like to call them dungeons because they’re very open and pretty.”

White Lotus have shot for “serene, peaceful” environments. While Xing doesn’t take place on Earth, per se, they’ve paid a lot of attention to history and “the way things are constructed”.

It’s an approach that’s yielded peaks dotted with East Asian archways and flora; fiery caverns with Anglo-Saxon patterns laced into the stone; jungles peppered with temples from either South America or Stargate. And contrary to common level design, desert doesn’t have to mean Ancient Egypt.

“We’re going for something more unique and fantastical in a lot of instances,” said Torkington. “But we’re trying to heavily ground our artwork in different classical styles of architecture and design.”

Xing: The Land Beyond doesn’t yet have a release date. Unreal Engine 4 development is available to anyone for a $19 monthly subscription fee.

In this sponsored series, we’re looking at how game developers are taking advantage of Unreal Engine 4 to create a new generation of PC games. With thanks to Epic Games and White Lotus Interactive. 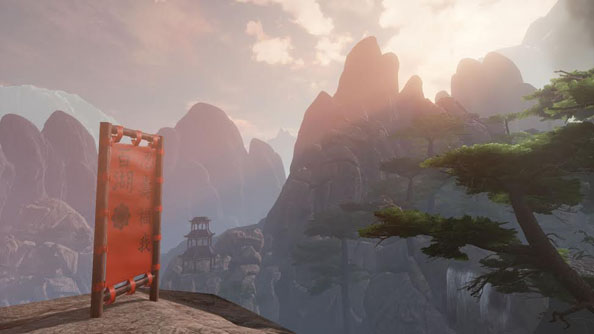 The team have made use of Unreal Engine 4’s capacity for physically-based rendering and models – and the “tremendous amount of tools” in the engine that helps devs ensure their work remains consistent across a range of art techniques.

Xing was running in Unreal Engine 3 when it was shown at GDC last year – the same GDC that saw Epic announce their affordable monthly subscription for UE4. Kruer, who had been wary of switching engines mid-project, returned from the Epic booth to tell her co-devs: “Guys, we might need this. No really, we might”.

Once switched, White Lotus took the opportunity to rethink some of the game’s style and refocus around readability.

“Not only do you see things from a true first-person perspective in the Rift, but you see the scale of things, you see the depth,” said Torkington. “That kind of stuff really comes into play when you’re thinking about visual clarity. We’re trying to make sure the way the environment is presented is not going to inhibit your ability to solve puzzles.” 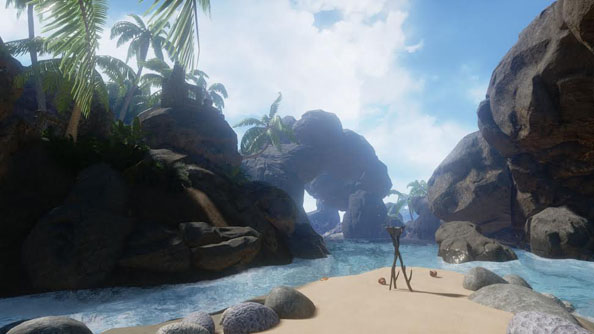 That clarity becomes especially important when you consider that White Locus have ditched UI and dialogue in favour of cues embedded in the world – poetry etched into stone monuments, and a gravity gun-inspired pick-up system for objects.

Items in Xing’s world won’t disappear into an invisible inventory until needed – they’ll be picked up, manipulated and carried around by the player in first-person.

“It gives you a greater connection to the world,” said Torkington. “Especially as you play as an apparition, we wanted to make sure there was some groundedness.”

“Once we sat down in an actual full-fledged game editor, it almost felt like we were playing a game that was about creating something,” said Torkington. “There are a lot of dynamics in designing the levels – changing the lighting here or an environmental effect here. We found that to be actually really entertaining.” 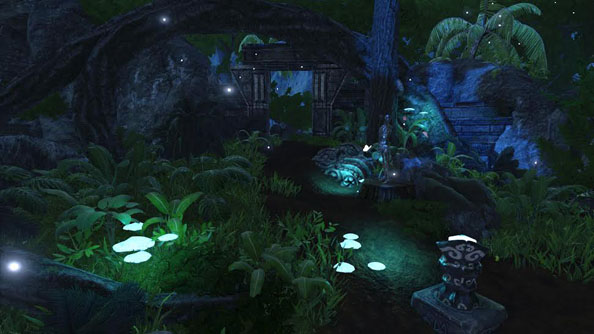 If we can turn on the rain with the flick of a switch, thought White Lotus, then why can’t our players? Xing’s puzzles now revolve around dynamic environmental tools that match their backdrops: in the rainforest, the player can harness the rain to make an impassable ravine passable – but will need to deal with the new waterfall they’ve created too.

No matter how outlandish the cultures or changeable the environments, however, Xing won’t leave first-time VR players spinning.

“I’ve played a few of those horror games, and VR has the potential to be one of the most horrific things you’ll ever experience,” said Torkington. “For those people who don’t get sim sick and are looking to have those kind of intense experiences, they’re going to be awesome. [But] we’re going for ‘stop and smell the roses’.”

Xing: The Land Beyond doesn’t yet have a release date. Unreal Engine 4 development is available to anyone for a $19 monthly subscription fee.

In this sponsored series, we’re looking at how game developers are taking advantage of Unreal Engine 4 to create a new generation of PC games. With thanks to Epic Games and White Lotus Interactive.