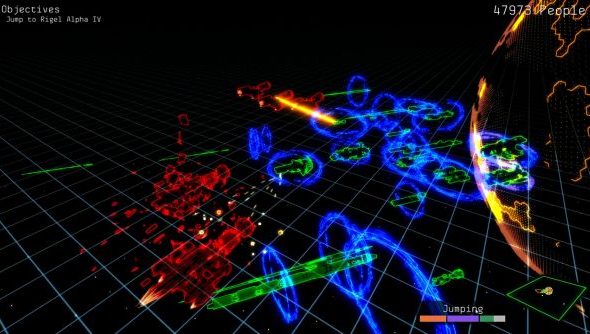 Mmmm, wireframes. I’ve had half an eye on XO for a while, ever since the developers sent me an e-mail about it having (correctly) summised it was making a direct warp jump down my street. It’s a spaceship strategy game in which you control a Battlestar Galactica style “last fleet” attempting to escape from an unbeatable enemy. It gets rid of that pesky third dimension to simplify things in the RTS-with-pause sphere, which allows for a more complex political element as you try to manage relationships with your captains.

My hatred of Kickstarter pitches that are just a trailer aside, it does look lovely. The art style is perfect, not only in that it’s no-frills beautiful and thematically solid, but it lets important details be picked out immediately. Who’s firing where, what formation are my ships in, what angle are enemies approaching from – you should be able to tell all this at a glance.

It plays out much like FTL and is currently planned for single-player only. You’ll pick a planet to warp to and start saving whoever is left there, beating back wave upon wave of enemy forces until you decide to bug out. While on the move you’ll have to deal with rivalries and scumbags, deciding who should be on your ruling council and who should be left out in the cold. You’ll also be upgrading ships and manufacturing weapons in the hopes of making the next fight a little easier. The eventual endgame is to defeat the enemy mothership and escape with as much of humanity as possible.

It’s a great, grand idea and as with all Kickstarter projects, the game I’ve built in my head looks wonderful. Hopefully the one they put together can match up. In this case, “they” is Jumpdrive Studios, a selection of first timers and industry vets who’ve worked on Halo 2 and Sword & Sworcery to name a couple. $40,000 is the target, with over 50% hit in the first few days. There’s a number of community challenges that will unlock stretch goals – a very odd concept, asking backers to essentially publicise the project so that they can be asked to give more money to it – which are detailed in this post.

A digi-copy of the game is $10, with estimated release around March next year. The Kickstarter Delays Algorithm (© Ben Barrett, 2013-2015, all rights reserved) puts that somewhere towards the end of 2016. More like middle of 2017 if they make much more than their target.