Honestly, it’s never been a better time to be a Yakuza fan. If you’re yet to be converted to the church of Kiryu Kazama then you clearly didn’t play the recent PC ports of Yakuza 0 and Kiwami. But you can’t dodge this one as Yakuza Kiwami 2 is here to give you a serious case of gaming FOMO. When you play it, you will worship the Dragon of Dojima.

Rebuilt from the ground up in the beautiful Dragon Engine, originally created for Yakuza 6, Yakuza Kiwami 2’s graphical upgrade when compared to the PC versions of 0 and the first Kiwami is astonishing. Ever considered a trip to Japan but the price of a plane ticket has made you wince? Consider engaging in a slice of virtual tourism in Yakuza Kiwami 2 instead.

The snippets of Japan that come to life in the fictional cities of Kamurocho and Sotenbori are wonderful and immersive in a way that few videogames manage to achieve. These cities feel alive; breathing, bustling, and tireless. Even in its darker spots, the world of Yakuza Kiwami 2 demands your attention, clamours for it even, with all its neon and glitter.

The Dragon Engine also brings a few important quality-of-life upgrades, including seamless transitions into interior areas and streetside shops, as well as into battles, which helps reinforce the open-world nature of the game. The progression system from Yakuza 6 has also been pinched, allowing you to spend your upgrade points across a series of skill trees, ranging from general stats to combat skills, and minigame and gameplay boosts too. 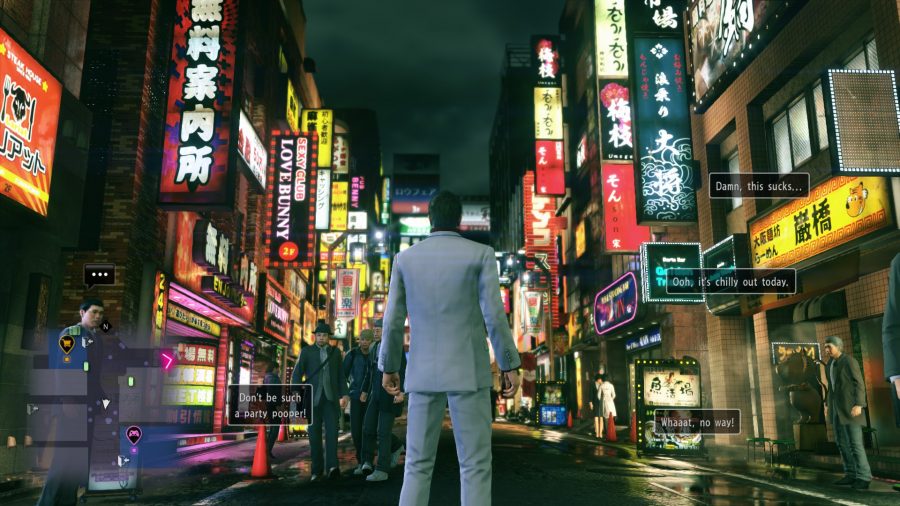 For PC folk coming to Kiwami 2 off the back of Kiwami or 0, the absence of different fighting styles creates the appearance of a shallow combat system at first, but worry not. Kiwami 2 builds on the fighting mechanics established in Yakuza 6, uniting a huge move list with over-the-top physics, and adding refinements that emphasise showmanship and the sheer impact combat has.

That means kicks and punches have a real weight behind them, leading to immense satisfaction when you punt a group of troublesome goons halfway down a street. There’s a larger focus on weapons than any game before it too, which makes for a more dynamic style of fighting altogether, as you can happily switch from plain old fisticuffs to a flamethrower or a table salt shaker – maximise fun by not being picky. Experimentation by way of using any and all objects that are lying around as weapons is encouraged by the simplicity of equipping and stashing them, it rarely interrupting the flow of the brawl.

Heat actions make a welcome return. Fill your combo meter and you can unleash super powerful moves that leave the people on the receiving end in a range of states, from hilarious to ‘better check if this one still has a pulse’. Kiryu can now also recruit allies across Kamurocho and Sotenbori, who’ll bring a helping hand – or weapon – when you’re near. My personal favourite is a plucky convenience store clerk who’ll throw a bottle of hot sauce your way to pour into the eyes of some unfortunate thug. Spicy. 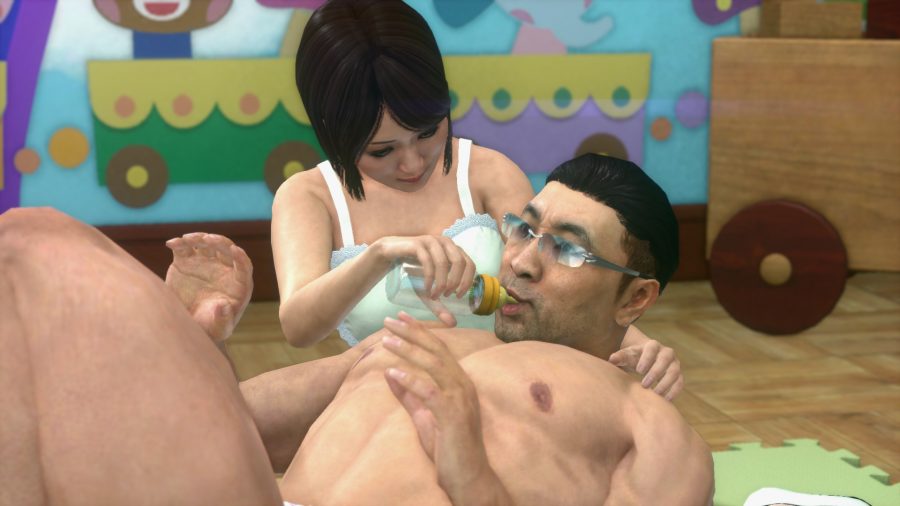 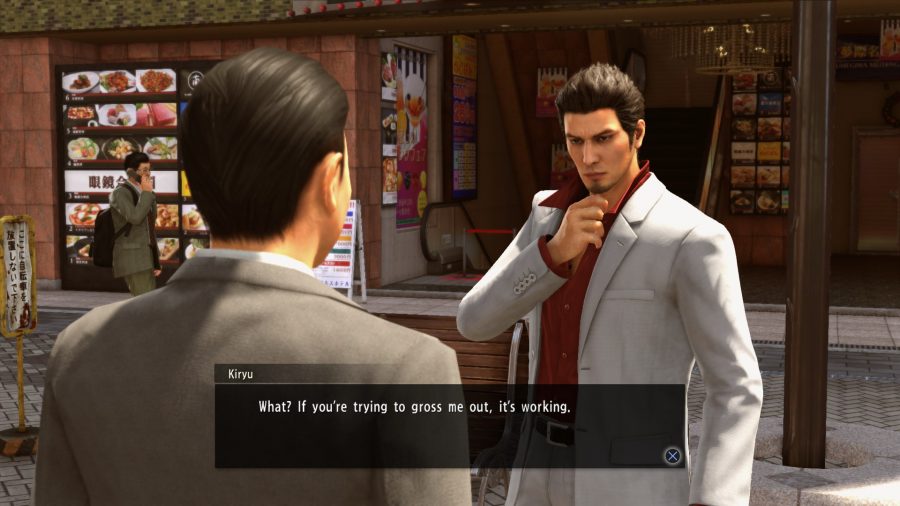 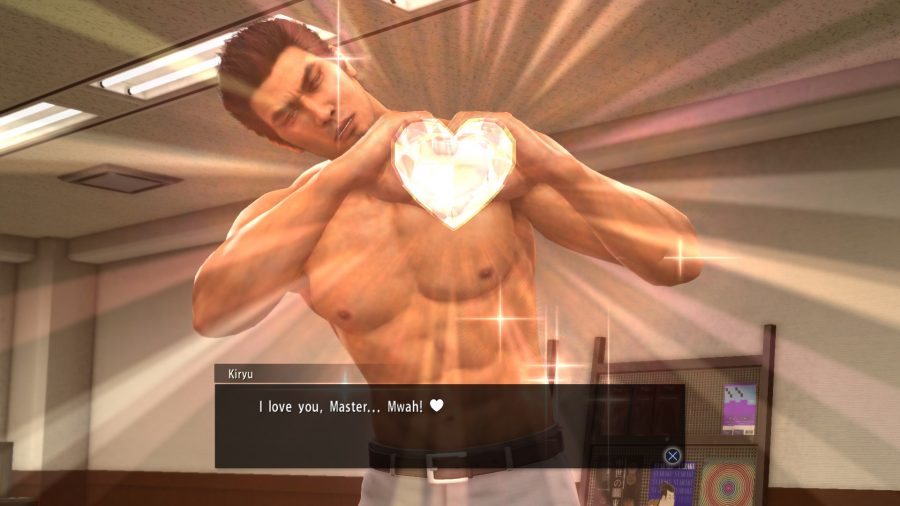 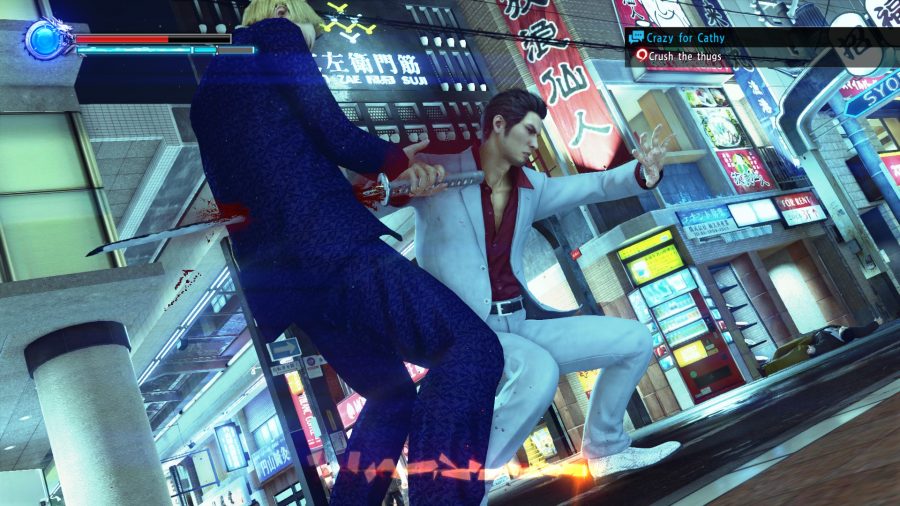 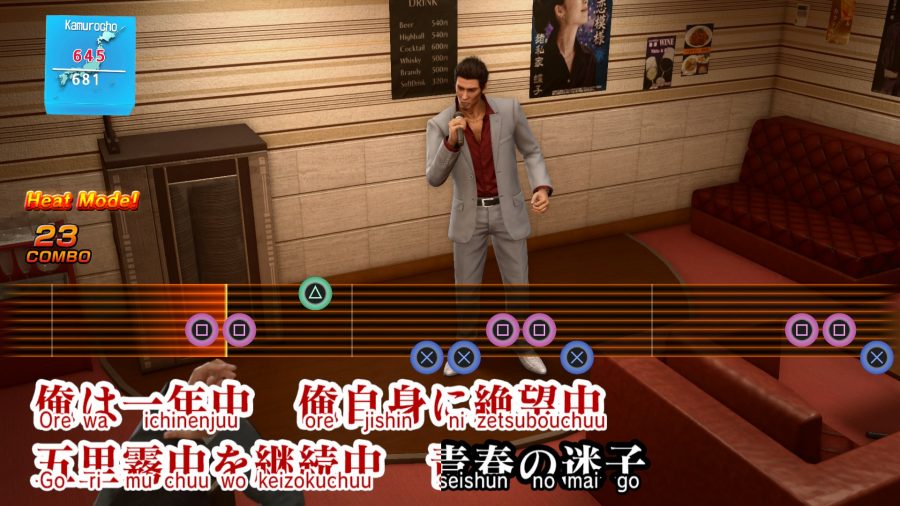 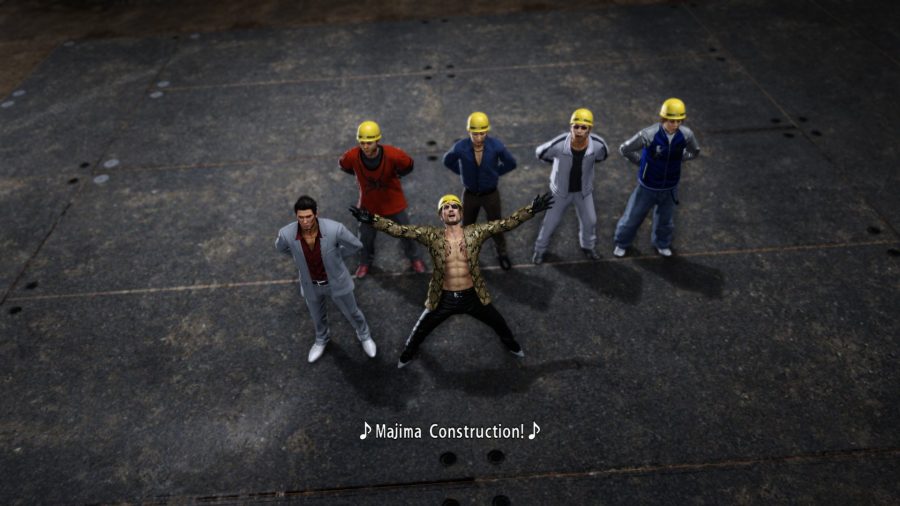 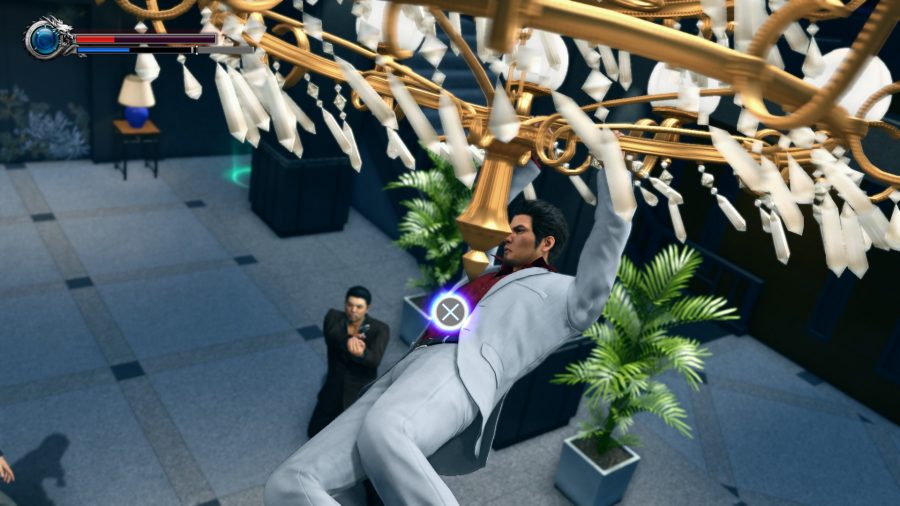 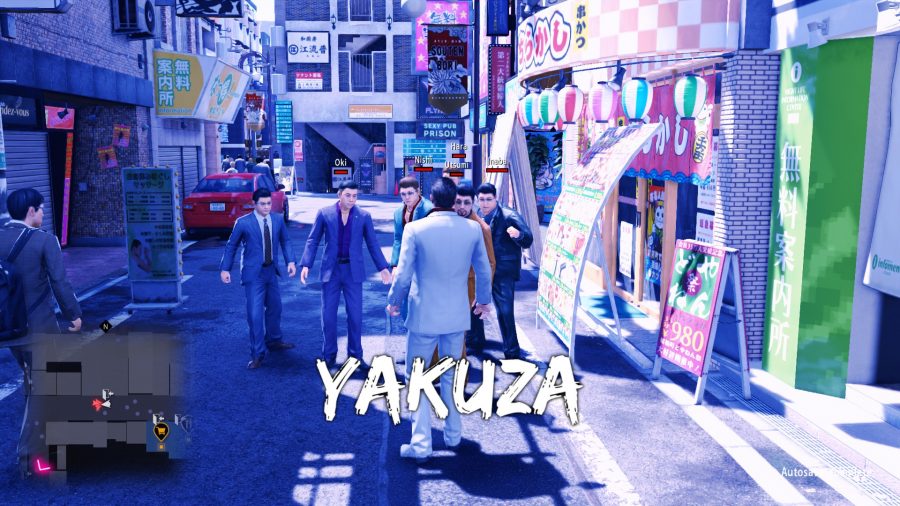 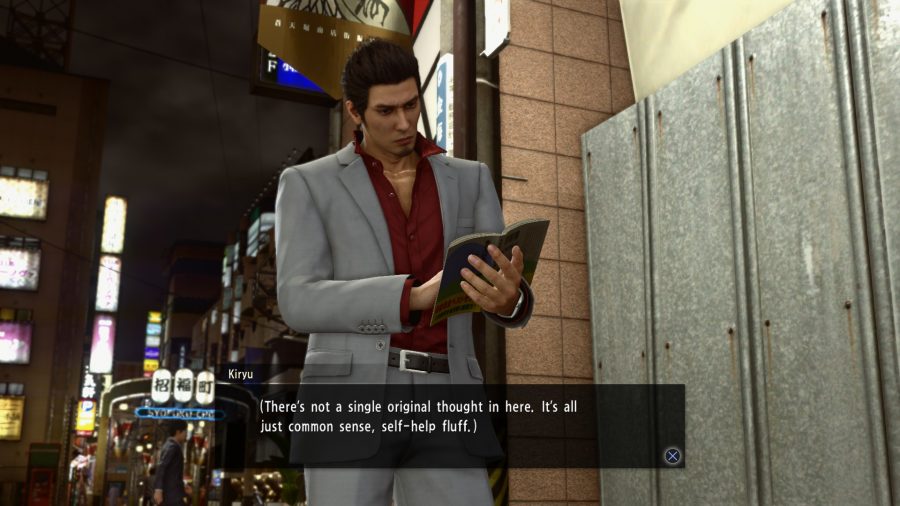 Focusing on a single fighting style means that Kiwami 2 is blessed with a finely-tuned combat system built on brutal and satisfying combos. Truly, it’s an accurate reflection of the Dragon of Dojima and his legendary skills.

Storywise, Kiwami 2 picks up a year after the events of Kiwami, as Kiryu is dragged back into the criminal life he hoped to leave behind. Kiwami 2 features one of the best narratives in the series, focusing heavily on familial relationships and the history these bonds write, but with so many twists and subplots stacked on top of each other, the story sometimes feels murky and thematically inconsistent. It’s worth sticking with it, though, as Kiwami 2’s villain, Ryuji Goda, is a huge series highlight.

A startling juxtaposition to Kiwami’s tortured and melancholic antagonist Nishiki, Goda relishes in causing chaos for the sake of it, and the violence it exhumes. His unpredictability and charisma make him exceptionally dangerous, and while his innermost personality and motives aren’t explored in as much depth as Nishiki, the enigmatic persona it creates is thrilling to watch unfurl. When Goda and Kiryu finally collide, it feels like a make or break moment for Kiryu’s character. 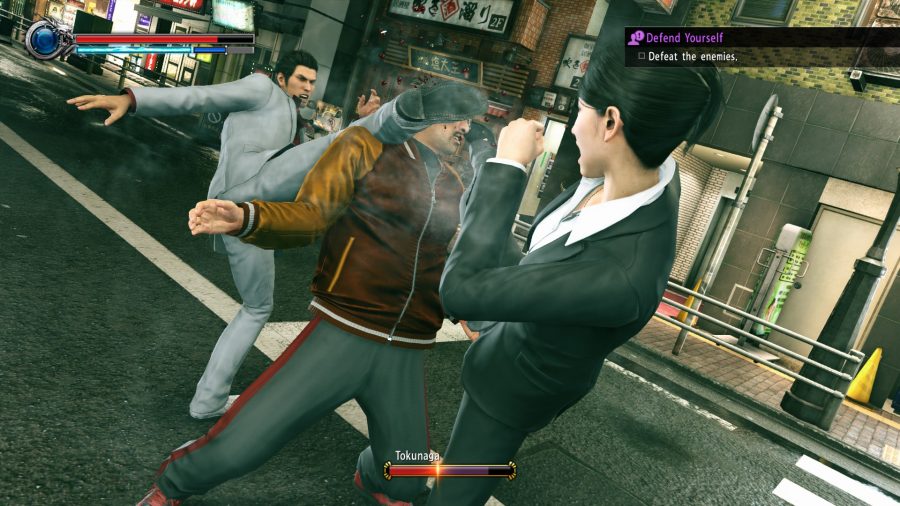 Women are, unfortunately, often sidelined throughout the Yakuza series, serving little purpose beyond acting as plot devices. It’s this that makes Kaoru Sayama such a welcome inclusion to the series. Throughout much of the plot of Kiwami 2, Sayama, a police officer investigating Japan’s organised crime syndicates, works closely with Kiryu, acting as his confidant while also uncovering her own personal history. She’s bold, brash, and one of the most interesting characters that Kiwami 2 develops.

Urine for a treat

In case darts or the batting cages were a bit too normal for you, one particular standout addition to Kiwami 2’s minigame arsenal is Toylets. It’s a gamified version of Sega’s real-life toilet game that encourages more cleanly bathroom habits. Which is to say, Toylets involves competing against a rival by, uh, urinating faster than them.

It wouldn’t be a Yakuza game without a plethora of substories to dive into between main story beats, and Kiwami 2 certainly doesn’t disappoint in that department. Whether it’s standing in as a half-naked model for a risqué photoshoot, beating up a rival Yakuza clan composed of adult babies, or helping to renovate your childhood orphanage, Kiwami 2’s substories deliver the oddball moments the series is renowned for, and mark Kiryu as the resident Superman about town. In fact, Yakuza Kiwami 2 serves as a greatest hits of all the side activities and minigames from the series so far.

The fantastic cabaret management minigame from Yakuza 0 is back, so astoundedly detailed that sinking hours into your hostess club feels like a key story beat in itself. Series darling Majima Goro returns in the Create a Clan minigame from Yakuza 6, this time centred on protecting his crooked construction company in what is essentially a tower defense game. On top of that, many of the series regular minigames make a return: karaoke, golfing, arcade games, UFO catchers, gambling, and more are littered throughout the city, begging to spend your time and yen. 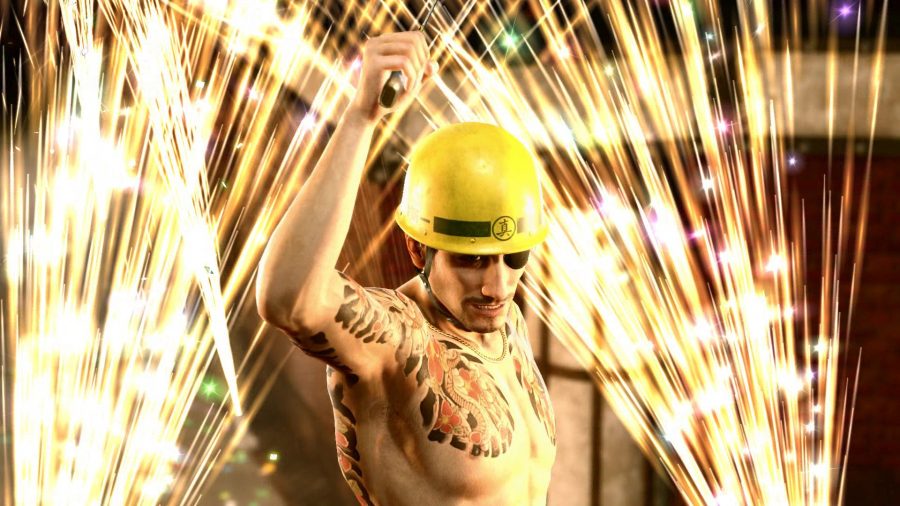 If you’ve been itching for more Majima since Yakuza 0, you’re in luck. Yakuza Kiwami 2 has an entirely new, separate story saga that covers what our favourite Mad Dog has been doing since the events of Yakuza Kiwami. It’s a relatively short set of chapters, but it’s welcome nonetheless, expanding the universe of Yakuza and its eccentric cast of characters, and helping to contextualise the story of Yakuza Kiwami 2 within the wider series.

It’s rare for a game to be as reinvigorated as Yakuza Kiwami 2, but it’s absolutely deserving of it. The gorgeous visuals and the revamped gameplay, refined by over a decade’s worth of experience, means that the originally underlooked Yakuza 2 finally gets its chance in the spotlight. Yakuza Kiwami 2 stands next to Yakuza 0 as the pinnacle of the series, and with each remaster that Sega brings to the PC, I can only hope that more people take a chance on this fantastic series.

Sega’s original sequel has received the remake it’s due. The story fumbles in places, but its high points allow it to sit next to Yakuza 0 as the best the series has to offer.