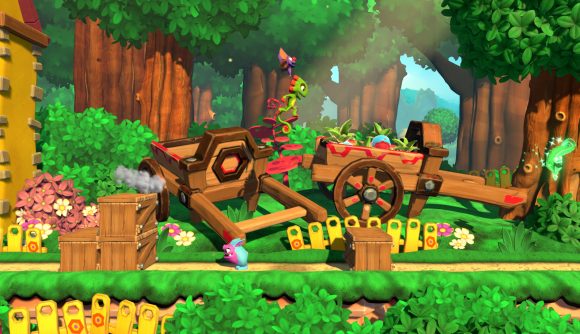 Playtonic has announced that it’s releasing Yooka-Laylee and the Impossible Lair, an indirect sequel to the first game released back in 2017. In this new addition to the series, Playtonic has taken the game in a totally different direction with Impossible Lair, leaving the realms of 3D and transitioning to a 2.5D platformer in the vein of Donkey Kong Country – but with less bananas.

Both the lively lizard and bonkers bat return to once again thwart Capital B’s evil plans, and this time he wants total control over the bee civilisation. To put a stop to his master plan you’ll need to free Queen Bee’s royal Beetallions by clearing stages.

Playing as Yooka, with Laylee closely at your side, you must complete a number of side-scrolling levels, rolling, dodging, and running through Capital B’s many minions. You’ll be clearing levels of enemies and, of course, there will be plenty of collectables for you to scoop up. Pagies, colourful quills, and ghosts are sprinkled around the levels, hidden away for you to find, or as rewards for completing challenges.

Yooka and Laylee are back with their special move set that made them the ultimate team in the first game. Yooka’s powerful roll, and Laylee’s spin both require teamwork, and the team’s moves flow effortlessly into each other as you fly through the levels.

In the first game, Yooka had a butterfly life bar which would deplete, but in Impossible Lair, Laylee will be your health bar. When Yooka gets hit, it sends Laylee into a spiral and you’ll need to catch her to maintain your health and keep your team-oriented moveset. If you don’t, then Yooka can only take one more hit before he returns to a checkpoint and is limited on the moves he can do. Save points are sprinkled all over levels in the form of bat bells when rung it will save your progress and will unite you with your bat BFF.

Similar to the first game, Impossible Lair also has a 3D overworld that connects all the platforming levels. Each area has its own open book that Yooka can jump into, transporting them to the stage. Levels can also dramatically change into a whole different area with a special trick in the overworld.

One overworld puzzle has you emptying a cavern of its water and when you redirect the water flow it floods one of the books. When you enter that level, the area is flooded, totally changing the way you played it before. Playtonic’s love for Banjo-Kazooie really shines through here with many of the levels in Impossible Lair will have two different versions depending on how you treat the book in the overworld.

To put the icing on top of the nostalgia cake, Impossible Lair’s music has been composed by Donkey Kong Country’s David Wise, and Banjo-Kazooie’s Grant Kirkhope, bringing that extra sense of magical charm to the game.

Read more: Check out the best platform games on PC

Yooka-Laylee and the Impossible Lair does not yet have a release date but Platonic plans on launching the game sometime this year. If you want to know more about Yooka and Laylee’s new adventure there are plenty of details in Nintendo’s Treehouse preview where Platonic played through a preview of the game and chatted in detail about what else fans can expect.