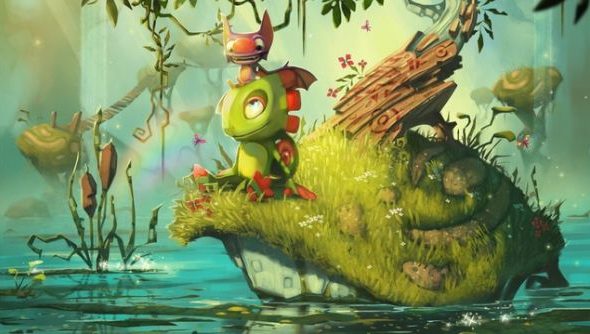 We’re all about teasing on social media over here on PCGamesN.com, using social media to tease bits of info and generally engage with our ever-growing audience. Yes, we ‘smurf the net’ with the best of them, as your Granddad might say. However, we cannot figure out what on earth is going on with Playtonic Games’ Twitter account.

If you’re a fan of games from smaller studios, take a look at the best indie games on PC.

As spotted by some eagle eyed posters on Neogaf, at some point recently the studio’s Twitter account was rebranded “Hivory Towers”, coinciding with the posting of a rather cryptic tweet, detailed below:

Early guesses on Neogaf suggested the account may have been hacked by a disgruntled former employee, but links both from the firm’s Facebook account and from the Twitter accounts other current Playtonic Games staff members gave such theories the boot.

As a result, the smart money is now on it being some sort of tease for a future announcement regarding the studio’s forthcoming release Yooka Laylee. Funded via Kickstarter, the game is pitched as a spiritual successor to Banjo Kazooie, building on the studio’s links to fellow UK outfit Rare in its Nintendo 64 heyday.

Just what it means, however, is anyone’s guess. Aside from said opening tweet, the only other posts made by the account since the name change have been a few replies to fans, making random comments such as “we’ve centralised our bandwidth” and “#synergy”. Oh, and the Twitter account now also comes with the tagline “work harder, not smarter”, all pointing to some sort of worker-bees-in-a-hive type link up. Could this be a reference to Banjo Kazooie itself? We just don’t know.

As some Neogaf posters note, this isn’t the first viral campaign for a game to reference bees, though we think it’s a stretch to suggest it has anything to do with Halo 2‘s “I Love Bees” alternate reality game. Nevertheless, we’re going to keep our eyes on the Playtonic Twitter account over this weekend to see if it offers any more hints as to what’s in store. We’re buzzing.