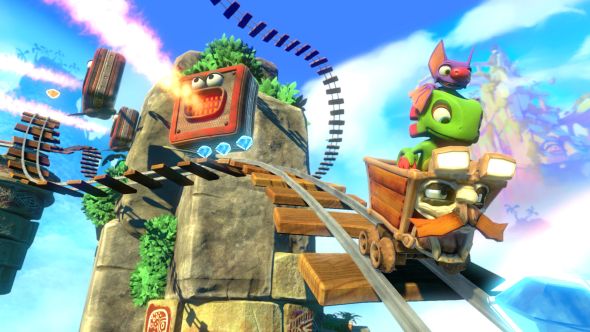 3D platformer Yooka-Laylee is due in the spring and promises chameleon-based family fun. According to a trailer released today, that fun will not be confined to a single player: Yooka-Laylee will enable you to tackle the campaign with a friend, and up to three others can join you on one of eight arcade machines at a location in-game.

If co-op is your thing, check out our list of the best co-op games on PC.

If you visit dated dino Rextro’s Arcade when Yooka-Laylee launches, you’ll find eight unique multiplayer arcade games there. You can chase the high scores solo, just like the cool kids did in the ‘80s, or get some friends round and take them on together. The arcade games will support up to four players in local co-op, and include arena brawler Glaciators; Gun-let Run, a shooter; and arcade racer Kartos Karting. Ideal if your setup supports so-called ‘couch-based’ co-op – hey, maybe you have a Steam Machine, I dunno.

Of course, Yooka-Laylee is a buddy story, named for its two lead characters; Yooka is a sensible green chameleon, while Laylee is a more excitable female bat who rides around on his head. Thus it’s only fitting that you’re also able to share the campaign with a friend; publishers Team 17 say your player two can take over “the Bee Team” and go in search of items – such as quills and butterflies – for when Yooka and Laylee need a health or energy boost. The Bee Team can also stop some traps and help player one get past certain obstacles.

Yooka-Laylee is the spiritual successor to the popular console platforming series Banjo-Kazooie, in which a honey bear (Banjo) and a big red bird (Kazooie) had similarly adorable adventures.

Yooka-Laylee launches on April 11 and is available to pre-order on Steam and GOG.