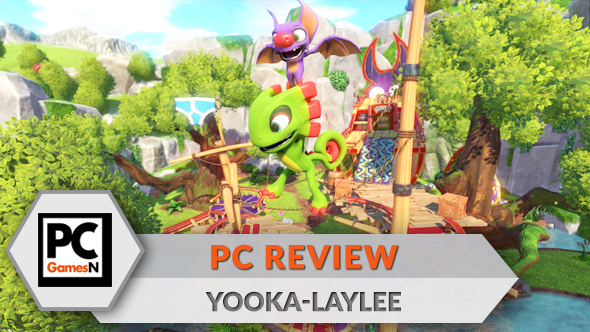 When my time comes to pass from this plane of existence unto the next, I can take my eternal rest content in knowing that ‘I was there’ during the golden years of Rare on the N64, circa 1997-2001. It was the heyday of the 3D platformer, with Rare championing the genre by way of such joyous offerings as Banjo-Kazooie, Donkey Kong 64 and Conker’s Bad Fur Day. It was one of the fondest, most cheery gaming epochs of my life and, judging by the £2 million-plus funding that the self-declared ‘Rare-vival’ 3D platformer Yooka-Laylee received, many people feel the same way.

Yooka-Laylee reassembles much of the old Rare team under Playtonic Games, including director Chris Sutherland, several designers, and N64 soundtrack legend, Grant Kirkhope. Within minutes of you starting, it’s evident how zealously it attempts to recapture the particular flavour of 3D platforming that Banjo-Kazooie represented. It’s basically that same game in a parallel dimension, where the main collectables, Jiggies, have been replaced by Pagies, Jinjos have been replaced by ghost writers, musical notes by quills, and of course a bear with a cheeky bird in its rucksack has been replaced by a cheery lizard with a cheeky bat on its head. Even the music of the hub world is an inverted version of the catchy Teddy Bear’s Picnic theme that accompanied you throughout the Gruntilda’s Lair hub in Banjo-Kazooie.

It’s a promising start, front-loaded with nostalgia, but the veneer quickly fades, and for all the game’s cuteness and solid level of challenge, its collect-athon structure feels outmoded and its development incomplete. While Playtonic clearly aimed to mimic rather than majorly improve on the 20-year-old Banjo formula, in some areas it even feels inferior to its, ahem, fore-bear… 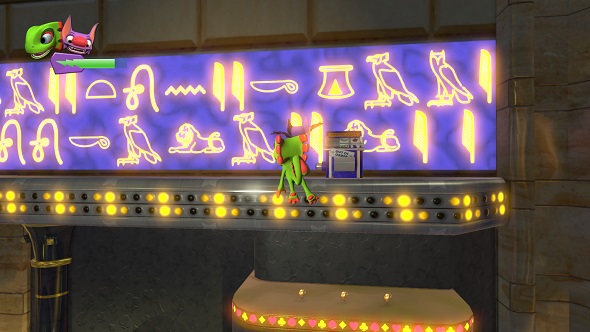 Here’s the lowdown. Inseparable chums Yooka and Laylee are in possession of a page from a book that they believe may be of some value. Their plans to cash in on it are scuppered when local mogul Capital B turns on a giant vacuum to suck all the world’s books into his corporate bunker, so as to turn them into pure profit (or something). So the two buddies head into his lair, jumping into worlds via Giant Tomes to recover not only their Pagie, but all of those stolen by Capital B. Perhaps that makes Yooka-Laylee a tale of small-scale enterprise fighting for survival against big business or, more likely, it’s a rudimentary plot put in place so you can get on with the platforming. And at its best, the platforming in Yooka-Laylee is very good – tough, old-school tests of dexterity that aren’t afraid to make you restart lengthy sequences if you fail, or even send you back to the beginning of the world you’re in.

There are five worlds in total, which is about half the number in each of the Banjo-Kazooie games. The slightly contrived option to ‘expand’ worlds when you collect enough Pagies doesn’t really make up for the lack of level variety either; eclectic themed biomes, after all, are as endemic to 3D platformers as guns are to shooters. Of the five worlds, the jungle-themed Tribalstack Tropics is the best designed, with some wonderful vistas, vibrant scenery, and vertiginous structures to scale.

This should’ve been a tease of things to come, but it doesn’t get better than this, which makes it telling that it’s the world we’ve seen most of in the trailer building up to launch. The icy world has a certain festive sleigh-bell charm, the swampy and spacey ones are mediocre, while the Capital Cashino is nauseatingly garish and dull, forcing you into dreary slot-machine activities that are depressingly distant from the verdant platforming of that first world. It’s so poor that you wonder whether this is the point at which the devs ran out of time, funding, or creative juice. 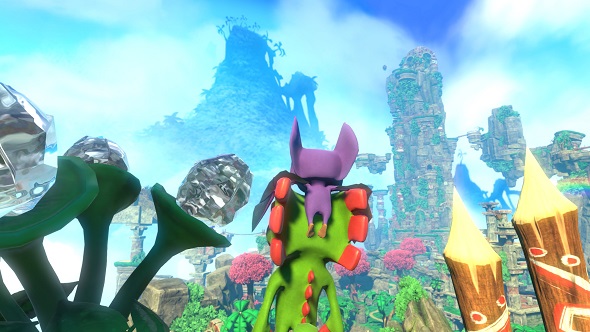 Something that’s easy to forget about those old Banjo games is that, by modern standards, they were pretty bloody tough. There was little sense of direction, no maps, and some gruelling platforming exacerbated by awkward camerawork. All of that (yep, the camerawork too) is recreated in Yooka-Laylee, for better and worse. While enemy encounters are fairly humdrum and can be resolved by a combination of spinning attacks and buddy slams, there are moments of old-school platforming extremity. In one sequence, I had to roll through a dark cave while managing my limited light source and rapidly depleting ‘Power’ bar. If I fell off, I’d have to start right from the beginning of the course. It was genuinely heart-stopping stuff as I’d teeter on the brink of the abyss before regaining my composure, or take a hit from a heavy grunt that mercifully threw me into a wall rather than over the edge. The feeling of elation upon getting to that Pagie was akin to defeating a boss in Dark Souls. Victory Achieved.

Most of the puzzle-based sections are decent too, if never remarkable. A puzzle may entail using a block of ice to refract light from a window so that it melts the ice on a treasure chest, or memorising how a cluster of icicles changes colours then replicating that on a larger cluster nearby. Sometimes, it’s just a matter of remembering areas from earlier in the game that left you flummoxed, then returning to them with moves that you’ve learned since.

You learn moves by collecting quills then selling them to the world’s resident seedy salesman, a snake called Trowzer (yep, haha, we’ll talk more later about the writing and sense of humour). The moves include gliding, flying, power slams, sonar waves and grabbing things using Yooka’s tongue. They all come in handy at some point, and can be bolstered by tonics you collect from Vendi the Tonic Lady (whose unearthly appearance unsettles me in ways I can’t fully explain). In keeping with its unguided old-school spirit, Yooka Laylee rarely telegraphs when are where you should use most of these powers, encouraging you to think for yourself. All of this is well and wonderful, but on the other hand, it’d have been nice to see Playtonic take some cues from modern games in how moves flow from one to the next – for example, why, when jumping out of a roll, can’t you immediately plunge groundward with a buddy slam, hmm? 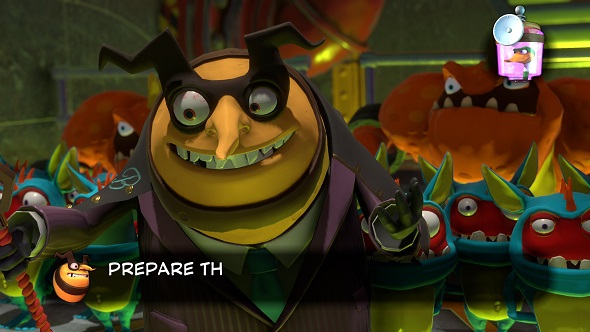 Amidst the handful of satisfying activities in Yooka-Laylee that test your platforming and mental dexterity, there’s an unhealthy amount of tedious tasks, such as drawn-out quizzes that you need to pass to move onto new areas, minecart rides, bland ‘retro’ arcade games and just about anything you do on the half-baked casino level. The gamut of feelings Yooka-Laylee evokes in me is all over the place – from euphoria when I’ve just completed a challenging segment, frustration when the camera craps out on me during a boss fight, and, particularly in the latter stages, desperate boredom as the global Pagie/activity count begins to run dry.

And that’s where the big problem of the old-school Collect-athon kicks in. It means that the longer the game goes on and the more Pagies, ghost writers or whatever you’ve collected, the emptier the world gets and the more time you spend wandering the levels searching for things to do, rather than actually doing things. With no maps or hints systems to point me in the right direction, I’d sometimes spend a good 20 minutes wandering listlessly in search of puzzles and challenges. Again, this is faithful to the Banjo rulebook, where the hunt for that elusive final Jiggy to 100% the game could take hours (or a peek at the Prima Official Strategy Guide), but it also exposes how dated that rulebook has become. At least Banjo offered a large number of worlds to explore, so there was less retreading of the same terrain over and over again.

One area that didn’t need too much of a makeover was the presentation. Grant Kirkhope’s score is as bouncy and magical as ever, with a twinkling brass-and-marimba soundscape that should warm the coldest of souls. As with Banjo, instead of spoken dialogue the characters make endearing grunts and squeaks that are then translated to human speech via text boxes, and the heroes have some nice animations, with Laylee dragging Yooka to his feet when he falls from an extreme height, scurrying on top of him when he’s rolling around, and clearly finding it a slog to carry her reptilian mate through the sky when they’re flying. It’s all perfectly pleasant, though its identity isn’t as strong as Banjo’s fairy-tale charms. Trowzer Snake’s persona is obnoxious next to his Banjo equivalent, Bottles the mole, Capital B’s workplace gags don’t stand up to Gruntilda’s rhymes, and, as previously mentioned, there’s something wrong with that damn Tonic Lady. 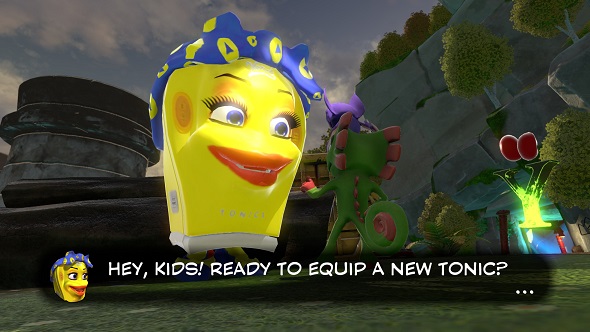 The entire script of the game is based around puns, basic meta-jokes and an anodyne sense of humour that doesn’t quite seem to know whether it’s aimed at children or adults recalling their misspent youths with Banjo-Kazooie; one moment Capital B will be making references to corporate exploitation, another Laylee will be calling Trowzer Snake ‘Wormboy’. It just doesn’t click, and drowns any hope of building up a vaguely interesting story in a pile of grating writing. ‘Yes, but that’s what Banjo-Kazooie’s humour was like,’ the purists retort. Yes, but times have moved on, and in the interim the likes of Beyond Good & Evil, Psychonauts, even Jak & Daxter have shown that you can combine whimsy with good writing. Again,Yooka-Laylee seems content to be a derivative of Banjo-Kazooie, rather than a true successor. With that said, if the below video makes you laugh rather than cringe, maybe you’ll find some joy in its specific style of humour. I didn’t.

Then there is the sense of incompletion. Enemy variety is at a premium, consisting mostly of ‘Corplets’ (the same basic goons reskinned for each level), bees that fire homing missiles, jellyfish in the water, and ‘Google Eyes’ that attach themselves to inanimate objects to attack you. Where are the crazy animals, the mini-bosses, the eclectic creatures unique to each world? It’s not like there are even that many worlds to fill with creatures, so what gives? Similarly, the multiplayer mini-games and ‘expanding’ worlds systems feel like bolt-ons designed to meet those Kickstarter stretch goal pledges rather than meaningful elements to improve the game.

Looking back on this review, I feel like a shit. Perhaps even a traitor to the 3D platformer cause for criticising a game that was supposed to champion the genre’s revival. Perhaps some of my criticisms won’t apply to truer Banjo purists than myself; maybe the punny-rather-than-funny sense of humour does it for you, as does spending vast amounts of time wandering the world with little guidance, trying to track down those precious collectables.

I get that, and to an extent I enjoyed rewiring my gaming brain to function like it did back in the 90s, when accusations of hand-holding in games were non-existent and platforming was tough and at times ruthless. But the luster wears off as the game wears on; and boy does it wear in those latter stages as the level design peters out and the global Pagie population diminishes. For several hours, Yooka-Laylee gave me the kind of thrills that I’d long been looking to rediscover, but that initial warm blast of nostalgia quickly fades, revealing this to be a mirage of the 3D platforming golden years, rather than their long-desired comeback.