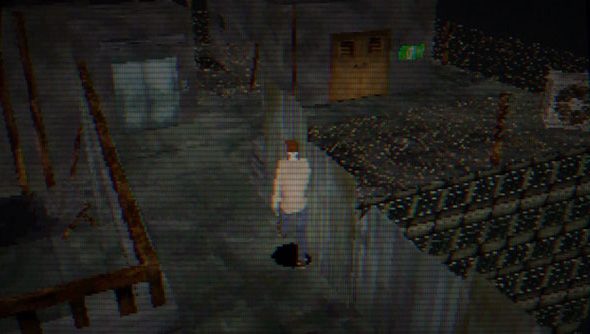 Cuboid faces with drawn on or indistinguishably blurred features, backgrounds that – if not pre-rendered to save on memory – are made of strange, warped textures that seem to skew and melt away like some surrealist dream, and sclerotic tank controls that are as frustrating as they are tension-building.

I could be talking about any of the great survival horror games of the 32-bit console era – Resident Evil, Silent Hill, Deep Fear – but in this case I’m referring to an indie PC title released just last week, aptly titled Back in 1995.

The game has been created by one-man development team Takaaki Ichijo, who’s aiming to appeal to a strange kind of nostalgia; a nostalgia for the early days of polygons, when intrepid developers, with an eye to the future, began to abandon the comforts and prettiness of pixel art in a bid to conquer the frontier of 3D graphics. 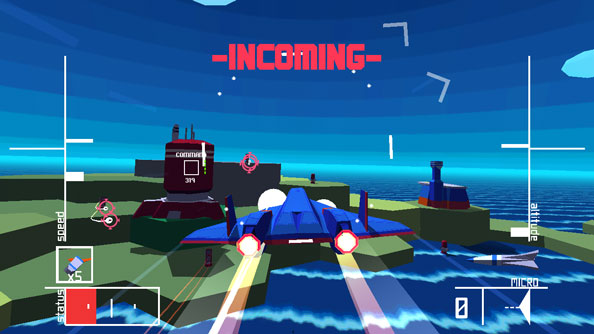 There’s no denying that the Tomb Raiders, Quakes and Silent Hills of the world were pioneers, but if the late 16-bit era was the classical era of games history – filled with beauty, architecture, and ideas that still resonate today – then the early polygonal games of the 32-bit era, defined by the Sega Saturn and PS1 (and by the inconveniently 64-bit N64), look medieval by comparison; a stepping stone in the history of games that’s useful to understand, but not something that, as far as I was aware, anyone would want to actually return to.

Nevertheless, I’m fascinated by Back in 1995, because it confronts us in the most crude way about whether there is some magic amidst those jaggy lines and murky edges. Just as 16-bit aesthetics were forgotten and now revived, there is a handful of brave games appearing that seem determined to bring about a great 32-bit renaissance.

Back in 1995 is ugly – really and willfully ugly. Its graphics options let you toggle a CRT filter and a slight noise effect that leaves no doubts about the game’s intentions. Indeed, these filters flatter the game, instilling it with a kind of murky mystery, while seeing too clearly reveals the true horror of the graphics. Such games were more or less designed to exist amidst screen noise and scan lines. 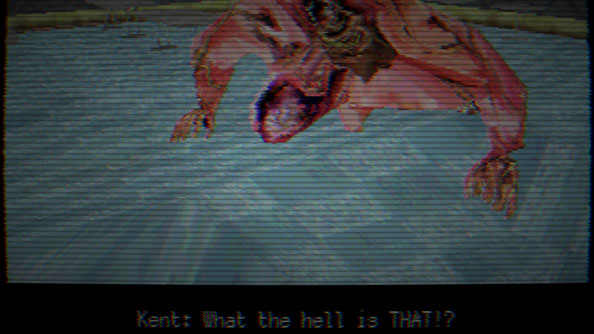 The tank controls and slow combat animations (I counted three seconds per swing) are equally true to their inspirations. It’s more 1992’s Alone in the Dark than Resident Evil (released in ‘96) in how it looks and plays, yet for all its shabbiness I do quite like it. The synthy music and pitch-black skyboxes are almost soothing, and there’s humour in the twisted textures and silly combat.

The gritty, unstable look of the monsters in Back in 1995, gives them an unearthly quality that’s missing in today’s games. If played as a contemporary third- or first-person game, they would look unconvincing and, frankly, shitty, but the fixed angles ensure that you never quite have control over your surrounding space, and the slow controls instil a deliberate sense of panic that horror games haven’t achieved since Resident Evil 4.

Back in 1995 may be entirely backwards-looking, content to appeal to nostalgia rather than progress, but there’s something to be said for its 32-bit sensibilities. It’s a style that was once borne of technical limitations, but is now resurfacing as developers are starting to appreciate its idiosyncrasies, bringing it out of the wilderness to find new and unexpected uses for it.

Another recent game to exploit the eerie jaggedness of ’90s-poly graphics is Devil Daggers, the frenetic arena shooter in which you fire endless daggers into an equally endless swarm of low-poly hellspawn, bearing down on you from the enveloping darkness. It’s a first-person shooter, with unfiltered graphics and short draw distances leading off into pitch blackness that make its hellish creatures barely legible. It works brilliantly, and even though it’s a very simple survival game at heart, it manages to evoke a hellish atmosphere by way of its artfully archaic looks. 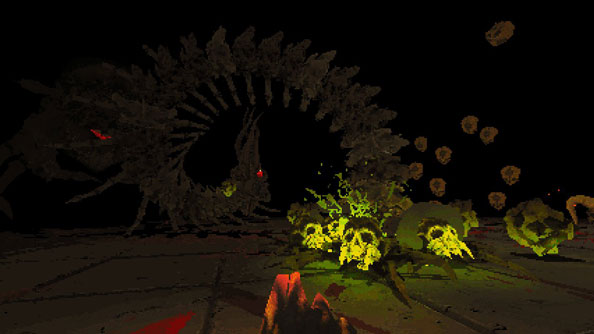 Devil Daggers is inspired by early polygonal shooters, but the sounds, pace, quantity of enemies and self-awareness to unapologetically be a mindless ‘run around in circles’ survival mode (with online leaderboard) come as a result of subsequent advances in the industry. Devil Daggers takes something ostensibly outdated, and turns it into something… beautiful? Not exactly. Brilliant? Clever? Fun? Absolutely.

Upstart developer Pixel Titans is also jumping on the 32-bit wagon with Strafe. The zippy upcoming first-person shooter has Quake II written all over it, albeit with modern physics and procedurally-generated levels. Like Devil Daggers, it takes advantage of the undemanding visuals to ramp up the onscreen panoply of explosions, enemies and blood, and looks like what latter-day Quake and Unreal could’ve looked like if they focused on intensifying the gameplay rather than cranking up the visual fidelity over the years.

While pixel-art games are now so ubiquitous that they don’t need to appeal to our SNES sentimentalities anymore, 32-bit-revival games are still fledgling, and lean much more on that nostalgia to get our attention. Strafe is a case in point, with its wonderfully excessive trailer evoking those hyperactive TV spots for Saturn and PS1 games back in the day; a transfixed teen slacker plays in his dingy room, the ‘force’ of the game is literally blowing him away as papers fly all over the room and gore bursts out of the screen, then… all hell breaks loose.The fact that this trailer exists (and is totally rad), suggests that nostalgia for the ’90s is, to coin a dangerously obscure reference from the era, Live & Kicking.

While the aforementioned games zealously stick to their 32-bit forebears, utilising their small CPU footprint to just give us more on screen, we’re also seeing some developers take on this resurgent retro style and wrap it in a modern package. Drift Stage is a racer whose vibrant colours, neon cityscapes and car styles may nod to the ’80s (particularly Outrun), but its graphics are made up of flat textures wrapped around wireframes, much like we saw in Sega’s legendary Daytona USA (1994) and its contemporaries.There is none of the coarseness that we see in Back in 1995 or Devil Daggers thanks to modern resolutions, anti-aliasing and all the other visual bells and whistles, but that 32-bit spirit is ever-present thanks to the faithful art style.

The artist behind Drift Stage, Charles Blanchard, is also working on Sky Rogue, a fast-paced 3D plane shooter recalling games like Star Fox and After Burner. The technique used by Blanchard was different was different this time, and instead of wrapping flat textures around wireframes a la Drift Stage, it uses flat-shading to achieve its bold, bouncy look (more on that in his Games Radar interview). Watching the trailer for Sky Rogue, you feel like you could be standing in an arcade twenty years ago, inserting a coin into the slot for the game to emit that satisfying ‘twinkle’ sound announcing that it’s ready to be played. At the same time, it looks mercury-smooth and polished in a way that only a modern game can be. 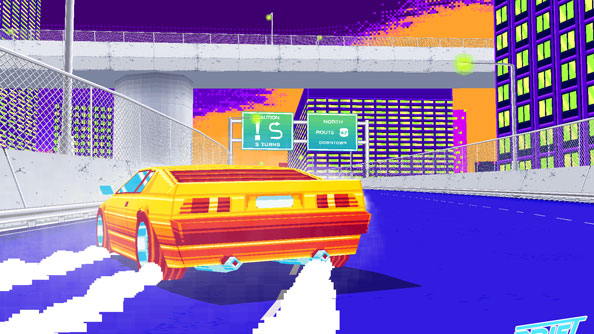 For all their promise, the various takes on the 32-bit style remain unproven. Only Back in 1995 and Devil Daggers have so far been fully released, and while the latter has been a critical hit, its price tag of £3.99 reflects its status as more a quick-fire mini-game rather than a complete package (that’s not to say that it’s not incredible value for the price and that you shouldn’t buy it immediately). Just as early polygonal games were entering uncharted waters in the mid-’90s, so these revival games are doing so now in a buzzing indie scene.

For now, 16-bit aesthetics get a lot more love than 32-bit. This is understandable, given that the two styles exist either side of the 2D/3D, pixel/polygon divide, with the latter inevitably being judged against all the subsequent advancements in graphical technologies. 16-bit is now seen as a timeless art, while 32-bit has only recently started undoing its image as a rough transitional phase to bigger and better things. But the love for it can be found around the forums, boards and sub-reddits of the internet.

This fantastic NeoGAF thread, for example, is dedicated entirely to snapshots of today’s games ‘demastered’ to a 32-bit style. Bioshock, Dark Souls, Skyrim and Mirror’s Edge are among those to get the treatment, and it’s hard not to get caught up in the prevalent sentiment on the boards that maybe there really is something to those deformed textures, jaggies, and retro attempts at attaining realism that is worth holding onto. With that said, appreciation of these images is based very much on their comedic ‘crappy’ value, while 16-bit takes on modern games from the likes of Cyangmou and Jnkboy are treated far more reverently. 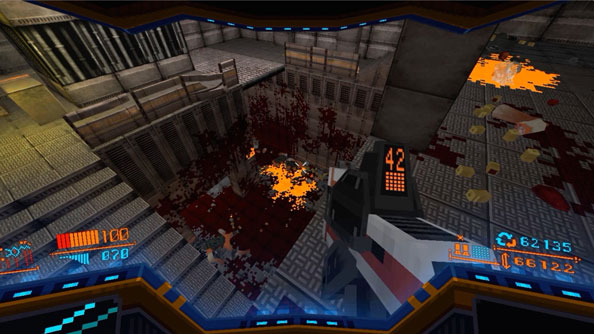 Now, it’s up to the developers of these 32-bit revival games to prove that this style is more than just a freakshow, and they’ve already started making progress.

Back in 1995 feels like a nostalgic nugget of a bygone era, an intriguing little trinket whose value doesn’t transcend its throwback aesthetic. But the real future of the 32-bit style lies in doing things with it that developers of that time could only have dreamed of: pack the screen out with scores of enemies that would once upon a time have fried your Voodoo 3 or GeForce 2 graphics card; embellish the game with realistic physics and blood; upscale resolutions; offer once-mercurial frame rates.

There is more to this once-unfashionable visual style than recreating that very experience of playing Sega Saturn on a chunky living room TV in the ’90s, sprawled across a chintzy couch or with your legs crossed on the floral carpet. With triple-A gloss on the one side of the games market and charming pixel-art at the other, it looks like there’s finally room for a bit of blocky, rugged low-poly goodness somewhere in the middle.

Any classics you miss from the 32-bit era? Let us know in the comments below.