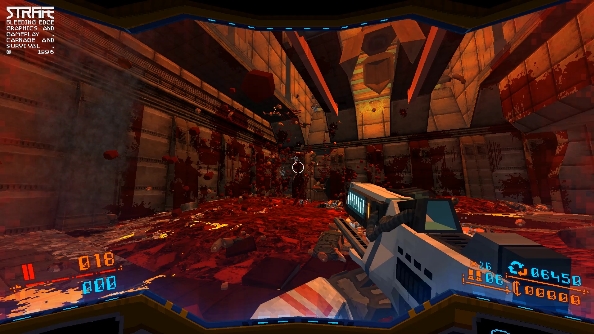 Remember 1996? It was THE year of FPS games. They were the days when space marines ran unnervingly fast and 9mm bullets made enemies burst like offal-filled water balloons. One of the key shooters of that era was, of course, Strafe. Except it wasn’t. Because it doesn’t come out until 2017.

Is Strafe destined to end up on our best shooters on PC list?

Strafe’s new trailer pushes its 1990s credentials hard, although all those sharp edges and pixelated explosion effects make it pretty darn clear what angle developer Pixel Titans are coming from. It’s not all old-hat though; procedural levels bring a modern, roguelike element to the FPS madness, meaning no two levels will be alike. They will all be coated in gore, though.

The game will feature four environments with four stages each, filled with over twenty types of enemies to be brutally murdered with more than thirty weapons. And should you want to really dive in, Strafe is a VR game with full Oculus Rift support.

Publisher Devolver Digital sets the release date as ‘early 2017’, so keep an eye on that window if you’re thirsty for the days of Quake.