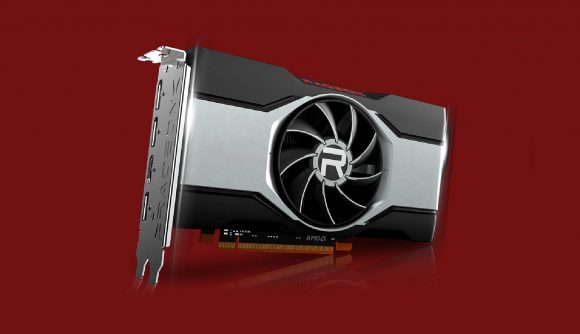 Rumblings of AMD’s upcoming Radeon RX 6600 variant have been making the rounds as of late, with details pinpointing the graphics card’s potential release date and price. Thanks to official specifications leaked by Videocardz, we now have a better idea of what to expect from the GPU.

According to the leaked specifications, the AMD Radeon RX 6600 will feature the RDNA 2.0 Navi 23 XL die, complete with 1,792 Stream Processors – 256 cores less than the XT variant. Its official TBP (typical board power) is also less than the XT’s, coming in at 132W. Of course, while the non-XT requires less power, it’s also slower, with 2,044MHz game clock and 2,491MHz boost clock speeds yielding around nine teraflops of gaming PC performance. The revised GPU also comes armed with ‘up to’ 8GB of GDDR6 memory, suggesting that 4GB models could also be in the works.

While the RX 6600’s specs don’t exactly mirror the likes of Nvidia’s RTX 3060, official benchmarks suggest that the GPU could hold its own against the green team’s entry-level candidate. Sure, the RTX 3060’s 12GB GDDR6 VRAM means it can provide a higher resolution experience. However, when playing modern games at 1080p, the RX 6600 matches the RTX card’s performance, with frame rates as high as 150fps.

It’s worth noting that the AMD’s leaked RX 6600’s benchmarks only use high-quality presets, which means independent tests could yield different results. That said, it looks like AMD’s upcoming budget graphics card will be a winner for anyone using a 1080p gaming monitor. The GPU has a launch date of October 13, so it won’t be long until we get an even better look at the card and its capabilities.