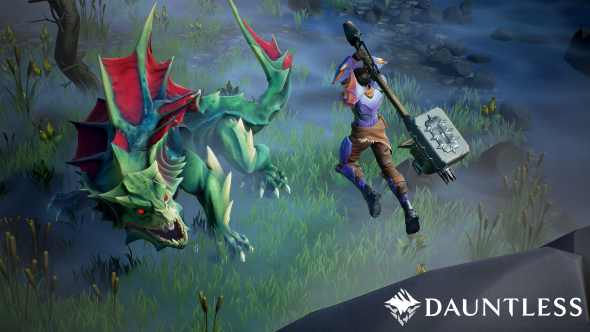 Almost exactly one month ago, Phoenix Labs began the first round of closed beta testing for their upcoming monster-bothering simulator Dauntless. While feedback has been relatively positive, they reckon the game needs a little more time in the oven. Updating their development roadmap, they have officially rolled back the date for open beta testing to ‘Early 2018’, with no fixed date.

Still in the closed beta? Sharpen up your hunting technique with our handy tips and tricks.

While feedback from the first wave of beta testers was broadly positive, there were quite a few issues raised regarding stability and the finer points of gameplay balance, especially from those intimiately familiar with the Monster Hunter series and hoping to get their fix on PC from Dauntless. A consistent point brought up seems to be the netcode and server stability, and after putting in some time with an earlier build of the game, our own Ben Barrett reckoned that it’s not quite ready for prime-time either.

While Phoenix Labs aren’t quite ready to throw open the doors to everyone, they did note on an official Reddit thread that their plan is to invite pepople to the existing closed beta in waves, so as to maintain a steady influx of testers. The more fresh eyes, the better, so you can still apply to join the game here, if the idea of stabbing giant monsters with almost equally giant knives tickles your fancy.

While normally any delay – given sufficient budget and time – could be considered a positive in games development, moving the open beta to next year (and presumably the full release even further beyond) will push the game into closer proximity of the upcoming Monster Hunter World, set to be the first (western) PC release for the venerable and exceptionally hardcore franchise. It’s a risky situation for Dauntless.