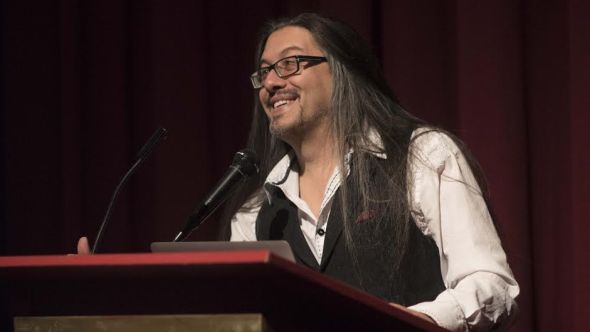 Editor’s note: this is part one of a three-part series documenting Romero’s career, spanning his early days as a teenage coder for the RAF, through the id era and up to present day. Header photo credit © National Media Museum.

To reach the National Media Museum from Bradford Interchange, you have to take the Walk of Fame. It’s a little more aspirational than Hollywood’s – the flashing lights and red carpet are painted into an underpass mural, and there are no names in the paving flags. Fewer celebs pass through this post-industrial city in northern England than do LA.

Yet here comes a bona fide one now: dressed in leather jacket and ripped jeans, iconic thrash metal hair crashing against his shoulders, John Romero has come to make Bradford his bitch.

Or rather, to pass on some hard-learned lessons to the next generation of programmers. One suspects Romero was never so brash as late ‘90s marketing made him seem. Courteous and comfortable under the eyes of a packed-out Pictureville auditorium, he stops for a never-ending stream of selfies with students too young to have possibly played Doom the first time around.

It’s like this wherever he and Brenda Romero travel – though the fans go particularly wild in Poland, for some reason. The Doom designer is gaming’s original rock star; deathmatch instigator and first voice of id, the blueprint for the big dev personalities who master E3 ceremonies today.

Eventually the selfies dry up and Romero takes to the stage for the keynote of the inaugural Yorkshire Games Festival.

“I do realise that some of what I’m about to say may sound insane,” he intones. “But we were in our 20s when we started id Software and we didn’t know there were any limits.”

Alfonso John Romero was raised in northern California, in a town with a population of just 6,000. He grew up addicted to the dark arcades of the ‘70s, but had no computer at home. So, aged 11, he began frequenting the local college where students were learning BASIC.

“I just went up to them and asked them what the words meant in their listings,” he recalls. “I wrote them down on paper and experimented on the HP 9000 mainframe there.”

To keep him at home, Romero’s parents got him an Apple II Plus – and he was “done going outside”. A few years later, he’d programmed 20 games and learned the 6502 Assembly language all of his favourite fast arcade games were written in.

“The Apple II was my personal home arcade,” he says. 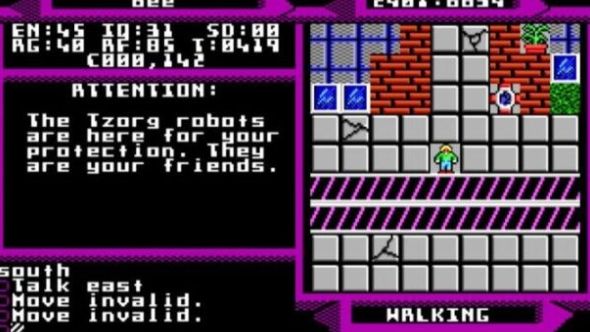 In Romero’s second year of high school, his stepfather moved the family across oceans to the RAF base at Alconbury, Cambridgeshire. There, the teen coder offered his skills to the air force.

“I can’t tell you what I was programming because that’s classified,” Romero deadpans. It’s hard to tell whether he’s joking.

Romero’s first job in games was at Origin Systems in 1987, where he was employed to port the post-apocalyptic RPG 2400 A.D. to the Commodore 64. But by that time, he’d already made 74 games and burned through three startup companies: Capitol Ideas Software, Inside Out Software and Ideas from the Deep.

With every game, Romero had given himself something new to learn: random maze generation; joystick input; music. Each release in those early, prolific years represented a step forward in the self-taught programmer’s solitary education.

It was only at Softdisk – a company that sold disc-based magazines out of Shreveport, Louisiana – that Romero was compelled to put together a team together. Placed in charge of a monthly PC games release called Gamer’s Edge, he hired John Carmack and Adrian Carmack – “Not related,” as Romero is still in the habit of spelling out all these years later – for programming and art respectively. Another Softdisk employee, Tom Hall, would come in to help the team out at night, simply because he loved making games. 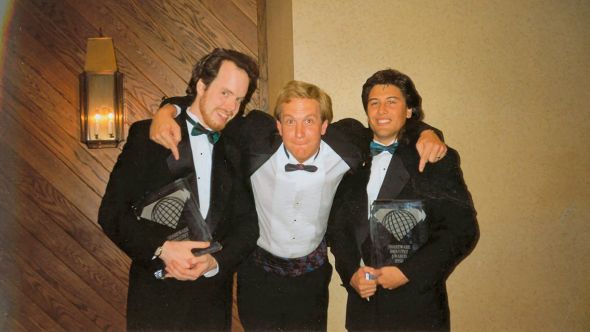 Romero discovered that, like him, all three had spent the previous decade sequestered in their own homes programming games. He was no longer alone in his obsession.

“This was the first time that any of us had worked together with another person on a game,” he notes. “It was incredible.”

Their first title together, a shoot ‘em up named Slordax, was destined to be forgotten. But it also marked Carmack’s first trademark tech breakthrough.

One night during Slordax’s development, John Carmack and Hall stayed up until 5am putting together a demo called ‘Dangerous Dave in Copyright Infringement’.

The next day Romero walked in to find a disc on his desk. Inserting it into his computer, he couldn’t believe what he saw. Although the PC had been out for nine years, in all that time nobody had worked out how to get DOS games scrolling smoothly, pixel-by-pixel, the way they did in Mario. Nobody but Carmack.

“It was a massive eureka moment for me,” says Romero. “It was like a bolt of lightning.” 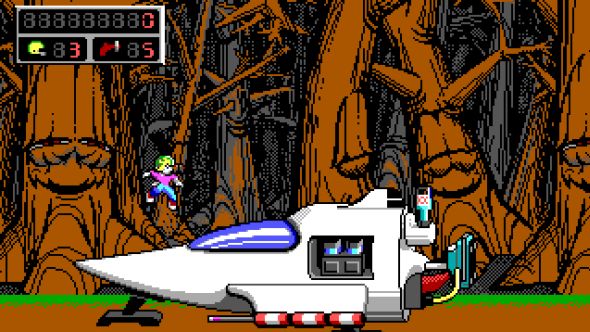 Picture the scene. Beneath the long, curving blinds that block the sunlight pouring into their Shreveport lakehouse, the two Johns sit – legs tucked under the same, gigantic D&D table Carmack liked to crack out at the weekends. In front of them, CRT monitors blare information from borrowed computers.

A third chair seats a whiteboard, spelling out a tasklist for the Super Mario Bros. 3 PC demo the team intend to send to Nintendo. An electric guitar lies unattended on a couch. And at the dining table, Tom Hall plays back VCR footage from the NES – freezing each frame so that he can recreate the tiles exactly in Deluxe Paint II.

After a week, id sent the finished demo to Nintendo. And they liked it. What Romero and his team weren’t to know was that the Japanese giant had made the landmark decision to only publish games on their own platforms – the beginnings of the Nintendo paradigm we’re familiar with today. They politely declined to have id develop a PC port of Mario.

Undeterred, id funnelled the tech into a different platforming series instead: the Commander Keen trilogy. The team made all three games in three months during the autumn of 1990 and, buoyed by the unprecedented scrolling, the games were a huge hit. Commander Keen cosplay would continue at events for years to come. 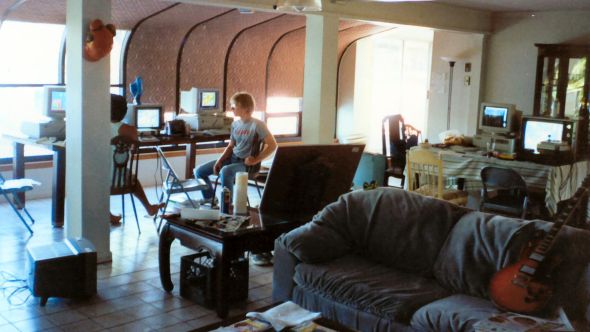 When id received their very first royalty cheque – for $10,400, half of what Keen made in its first month – they immediately bought new computers. The four young developers quit Softdisk two weeks later.

id was formally incorporated on February 1, 1991, and would make 12 games that year. They had names like Shadow Nights, Rescue Rover, Dangerous Dave and the Haunted Mansion. Each took a couple of months to make – but the team got into the habit of developing two games simultaneously. The four founders never built prototypes, instead polishing as they went. They could handle it: that intense decade prior had placed them all in good stead for the working pace of id.

“We had the entire game in our heads,” says Romero. “We just needed to quantify what needed to be done and went about working on it until the game was finished.”

In the early days, royalties were invested back into the studio – each founder taking out different amounts of money according to need.

“It was more important that we could work together,” remembers Romero. “We were just happy to make enough money to make the next game.” 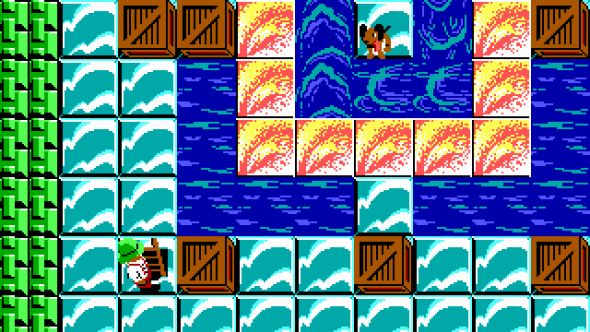 One day it rained incredibly hard, and Shreveport’s 8,575-acre Cross Lake rose up, flooding the road to the house. Romero’s car couldn’t get through – but as ever, the team were furiously working away on games and desperate to get back to it. The designer decided to wade through the water on foot instead, dodging water snakes all the way to the lakehouse.

“I took another shower and got back to work,” he recalls. “We were all so excited to be making our own games 24/7.”

Listening to Romero talk, it’s still easy to hear the childhood engrossment with computers that carried him through scores of early games to the foot of Mount DOOM. He recalls period hardware and working processes in great, extraneous detail. He tells the anecdote about the snakes in the same eager tone as another that ends with the punchline: “And then he said, ‘Oh, there’s a known error with the floating point dividing structure on the Pentium.’”

This rock star is also an unrepentant programming nerd – who calls the discipline “a creative artform based in logic.”

In August 1991, id moved from Louisiana to Wisconsin, where Tom Hall had lived during college. But it wouldn’t be for long. 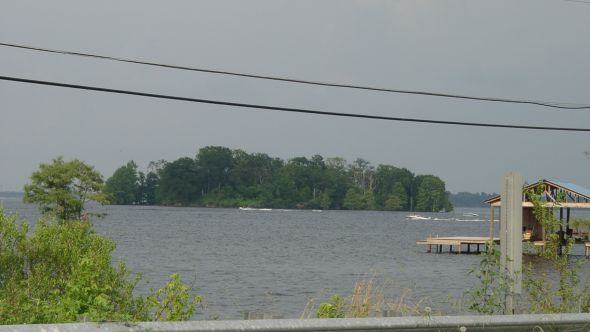 “Only four months later we were found dead in the snow, victim of Wisconsin’s brutal winters,” jokes Romero. “We knew how to program in Assembly language, but not how to ask Tom Hall, ‘Hey, what are winters like up here?’”

After six months, id found its final home down in Texas. And in January 1992, they decided to go all-3D, based on the promise of a fantasy action game they’d built called Catacomb 3-D (“It looked cool, but it just didn’t really play cool.”).

The vehicle would be Wolfenstein, a series of ‘80s stealth side-scrollers set in WWII the team were fond of. id would wrench Wolfenstein into three dimensions, changing the game – and PC gaming – irrecoverably.