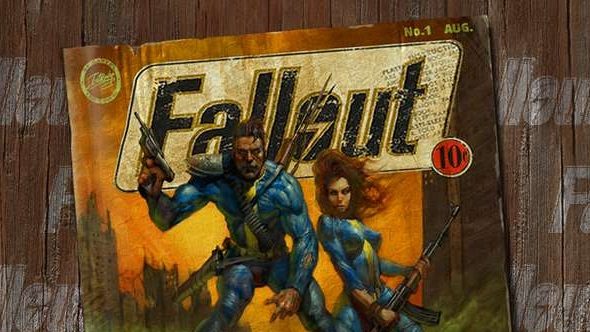 The Fallout series has become one of the cornerstones of modern gaming, and while hard to argue that it hasn’t changed a lot over the years, the setting remains tried and true and compelling to this day: A pulp sci-fi world of 1950s aesthetics wrapped around future technology, of mutants, monsters and madmen. To commemorate the 20th anniversary of the franchise, they’re giving away the original Fallout for free on Steam today – grab it while it’s hot.

Twenty years later, and the series continues to mutate and evolve. Here’s some of the latest community-made freakishness for Fallout 4.

If you’ve never played it before, the original Fallout can be a little bit daunting, even for players familiar with the modern, first-person incarnations of the series. This is CRPG’ing as it used to be; heavy on stats, low on mercy and with a steep learning curve, but it’s considered a classic for good reason and still holds up surprisingly well if you can get past some of the rustier elements.

Despite an interface that was a little clunky even two decades ago, the original Fallout offers a level of freedom that hasn’t been seen in the series since New Vegas; where your character’s chosen abilities open up radically different paths through the story, where combat can be eschewed in favor of smart talking, sneaking and creative problem-solving as a matter of course.

Fallout also comes from an era of gaming where you were lucky to get one patch after release, no matter how ferociously buggy things were, and Fallout was buggy, and arguably still is. Fortunately, the Fallout Fixit Pack exists. A community-made bundle of bug-fixes both official or otherwise, along with some (optional) mods that that restore cut content, and expand the game into areas once described in early design documents. Whether you choose to take the new additions, we very highly recommend taking the bug-fixes at the very least.

Fallout is available on Steam now for the very reasonable price of Free.