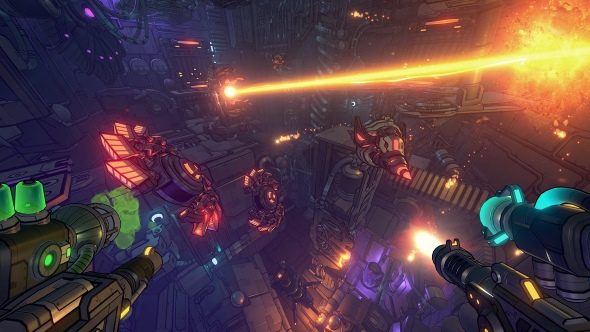 Mini-nukes, quad-wielded plasma shotguns, huge swarms of deadly robots and a truly killer sci-fi industrial soundtrack. Cryptark should have hit it big, but Alientrap’s sci-fi roguelite shooter never quite caught on, despite my best attempts to sing its praises.

It’s good that some devs just never stop dreaming. Cryptark is officially getting a sequel, and this time it’s shifting to a first-person 3D perspective. Slip into the cozy confines of your absurdly well-armed power-suit again in Gunhead, coming sometime next year. Read on for some details, and a rather snazzy announcement trailer.

Don’t know about you, but space is where I get all my best shooting done. Get your laser-light on some of in these stellar games.

Set directly after the end of the original Cryptark, your mercenary salvage crew have hit the motherlode – the legendary Cryptark – a massive, dead alien colony vessel of untold value. Problem is that the government that contracted you to find it wanted you to stand down and surrender your ship, and that just wasn’t going to happen. Now you’re on the run, and still in the middle of a well-defended (but long-dead) alien flotilla.

Guess you’ve got a lot more shooting to do.

As mentioned, the big change for this sequel is a perspective shift. No longer is it a side-viewed twin-stick shooter, but a deliciously cel-shaded FPS. It’s still unmistakably Cryptark, though, in look, sound and general atmosphere. 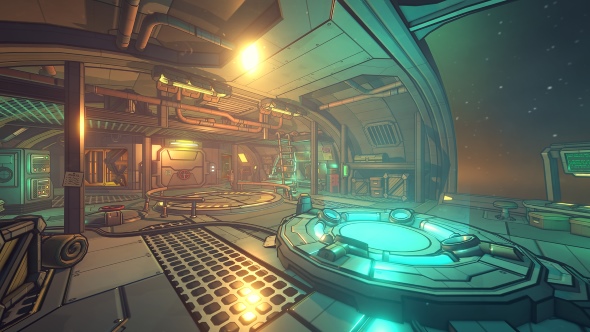 I’m especially glad that Alientrap have committed to the quad-wielding overkill of the 2D original. On each sortie you’ll be loaded up with four different weapons, which might make the game a little easier to control on gamepad than mouse. Personally, I don’t mind. When you’re firing four guns at once at enormous swarms of enemies, you probably don’t need pinpoint twitch accuracy anyhow.

The trailer above says it all, really. It’s more of the same, but up-close and personal, right down to the horrible techno-organic brain cores powering each derelict vessel you explore, the swarms of semi-skeletal defensive drones and some really big explosions. Nuclear, even.

One difference I do notice is gravity. In the original, you were floating freely through these craft, but there seems to be a definite up and down this time round, with the player using a jetpack to navigate between ledges within these alien ships. While there do seem to be some free-flying zero-G segments in between craft, the combat shown so far seems a little more grounded.

Anyway, there’s no price-point announced yet, and no release date beyond a tentative 2018. You can track any further developments on Gunhead by following it on Steam, and if you haven’t already, you should probably pick up the original. It’s damn good fun.