Though we’re closer than ever before to the release of the desert map for PlayerUnknown’s Battlegrounds, Crytek’s free-to-play shooter Warface has still managed to get a dusty Battle Royale map out ahead of the mega-popular PUBG. Warface is focused on much smaller engagements than you’d associate with with a typical Battle Royale, and this take on the mode reflects that.

Warface made our list of best free games on Steam, even before this update. See how it stacks up with the competition.

Warface Battle Royale features 16 players, featuring a few minutes of “dynamic fights with new scenarios unfolding each time you play.” It still has the now-classic features of a shrinking game zone forcing players into contact, and an array of crates and airdrops providing access to weapons and pickups, and you’ll be able to take advantage of over 70 different weapons in the mode.

Though 16 players are far fewer than other Battle Royale modes, the new map is still Warface’s largest, making this a very unique mode for the game. Whether or not it pans out for the title in the long run remains to be seen, and the mode is currently slated the only be a short-term addition to the game.

Original Story, November 11:Because absolutely every shooter in on the market needs a Battle Royale mode now, it’s time for Crytek’s quietly successfulWarfaceto take a swing at PlayerUnknown’s Battlegrounds’ crown.

Fittingly set in a large desert environment (familiar?), it replicates most of the gameplay mechanics we’re familiar with from the likes of PUBG, including scavenging for equipment, a continually narrowing play-area and the crown going to the last man standing, and it’s due to go live with the games’ next update.

I must say that Warface seems an awkward fit for a Battle Royale mode. Up until now, the game has exclusively been focused around small-team PvE cooperative missions heavy on the setpieces and boss-fights, as well as smaller-scale PvP in the vein of Call of Duty. 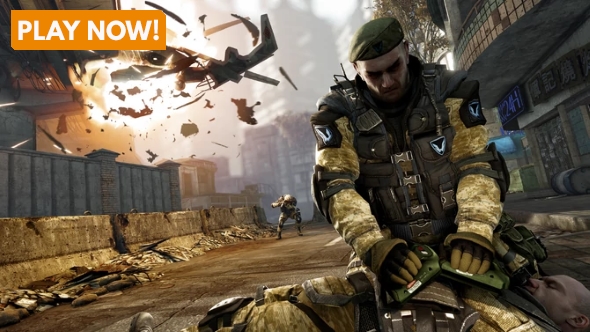 As such the Battle Royale mode may have a larger, more freeform map than any other available in Warface, but looking at some footage of the Russian version of the game (which already has this update), it seems that each match is limited to just 16 players, making it a significantly less royale-scaled battle than some competitors.

While Warface doesn’t get talked about much, it has maintained a sturdy-enough playerbase on Steam to weather Crytek’s internal problems, as well as a transfer to a third-party publisher.

You can play Warfacefor free. Personally, I recomend sticking to the co-op stuff. And a tip: Don’t waste time pouring bullets into the front plating on power-armored enemies. Flank or distract as required.