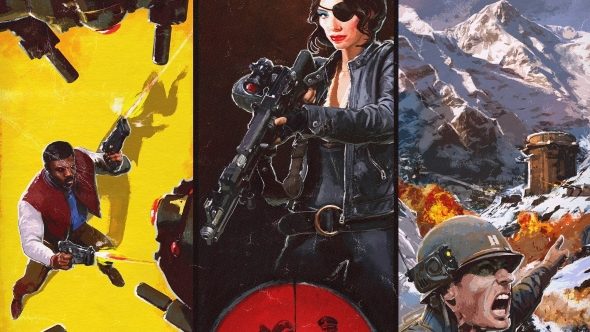 Ever since the release of Wolfenstein II: The New Colossus on October 26th, players have been wondering what lies behind a mysterious, massive bulkhead door aboard your mobile hideout/U-boat, and why the clock on it is ticking down.

We already knew half the answer – the date the door is counting down to, November 7th, when the first piece of the game’s DLC is set for release – but Bethesda have promised some additional surprise beyond that. YouTuber BlondBassist decided to cut to the chase and use the PC version’s developer console to clip through the vault door for an early peek.

Tired of shooting Nazis? Nah, but variety is the spice of life. Shoot some other things in these other FPS greats.

While the video above is interesting for what it shows, I don’t think BlondBassist reaches the right conclusion.

We’ve known since well before the release of the game that there is a season pass, and the prologue chapter of The Freedom Chronicles, (a series of three DLC adventures starring new characters) was to be a preorder perk for the game. The fact that there is an in-game shop (almost certainly linking to the Steam storefront) is not the surprise.

The Freedom Chronicles is not, contrary to what the video claims, a comic series. Although it does keep up the pulp adventure comic tone of the rest of the game.

The surprise is the addition of the Combat Simulator. From the looks of it in the video above, it’s an arcade mode not too dissimilar from Doom 4’s, and roughly on par for what I was expecting the surprise reveal to be.

Ever since I completed my first playthrough of Wolfenstein II, the final unlockable bonus mission have stuck in my head. It’s honestly not much to write home about, and feels like a modular assemblage akin to a Snapmap creation from Doom 4. Ever since, I’ve expected that the game will either be getting some manner of arcade instant action mode, possibly using these modular environments, or a level editor in the vein of Doom 4, which Wolfenstein II shares an engine with.

Personally, I’m expecting some new (if spartan) environments to run around in, given that the District missions in the game are already effectively instant-action scenarios. However it turns out to be presented on the 7th, it should be a fun new excuse to shoot a lot more Nazis in the face with absurdly large guns.