A Hat in Time has a new trailer and will be heading to PC, PlayStation 4, and Xbox One this autumn. It’s about damn time!

If you’re not familiar with it, A Hat in Time was Kickstarted back in June 2013, it being one of the first in this current wave of revivalist 3D platformers, announced long before Yooka-Laylee, Poi, Snake Pass, and the Crash Bandicoot N Sane Trilogy. Oh, and that Mario fella’s new game, too.

How was Yooka-Laylee, anyway? We tell all in our PC review.

Have a watch of the new trailer below and stick around after if you’d like to know more about the game.

In A Hat in Time, you play as Hat Kid (obviously), named so as she’s able to use magic yarn to stitch together hats that grant her different abilities. Get a witch hat and she can brew explosive concoctions, for example. She can also find and trade badges with people to attach to her hat that make those abilities more powerful

Hat Kid is also a space traveller, but the Time Pieces she uses as fuel for her spaceship end up scattered across a nearby planet. You’ll need to help her get enough Time Pieces back so she can continue her journey while also batting away her arch-nemesis, Mustache Girl.

The full game will have five huge, open levels to explore when it launches, each with its own theme and loads of things to collect and secrets to find. There’s Mafia Town, populated by a gang of cooks, Subcon Forest, full of huge traps and bigger monsters, and Alpine Skyline, which is a beautiful and fast-paced level among the clouds. Two more levels will be added as DLC once the game is out. 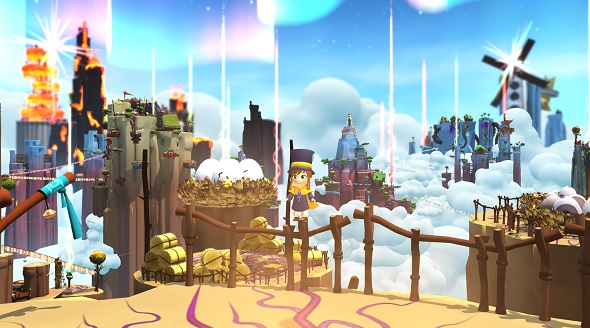 As you can see in the trailer, A Hat in Time really embraces the thrill of movement, with Hat Kid able to swing, spring, bounce, and float her way around the levels. It also has a great sound effect for picking up collectable – a very important feature.

Speaking of features, it should have local and online co-op too, so you can play along with friends. It will also come with a level editor and will support Steam Workshop so you can easily share your creations with the internet.

For more, check out A Hat in Time’s website and its Steam page.