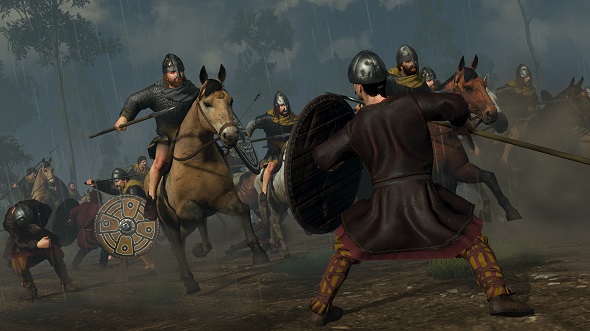 It all went wrong when King Flann died. Respected throughout Ireland, he was replaced by his cousin, and within a few turns the name of Mide was manure. The green smiling faces in the diplomacy screen quickly inverted, and declarations of war followed one and sometimes two at a time as weaker factions banded together. It is a rude reminder that, oh yeah, this is not Warhammer.

I had thrown King Flann into one too many fights during an important battle. I could have won fairly comfortably even without his involvement, but his royal guard were my only heavy horse, so I figured why not? Because he can die, that’s why not – major characters in Total War: Warhammer have individual health bars, so are easy to monitor, and if ‘killed’ they are only ever wounded, so they can return to your service after a few turns’ rest. There are also no diplomatic repercussions for getting them ‘killed’, whereas in Thrones of Britannia, your faction’s leader is the linchpin of all your foreign relations.

If you think Thrones of Britannia is a weird entry to the Total War series, check out how the Tomb Kings completely shake it up.

I should have options in my family tree – adoptions and forced marriages – to shore up my relationships, but they all cost money. Instead, in my overconfidence I have been recruiting an over-large army for a war in the north, so funds are tight. Many armies in Warhammer are able to field 20-stack armies from fairly early in the game, but this has seldom been the way in historical Total War titles. 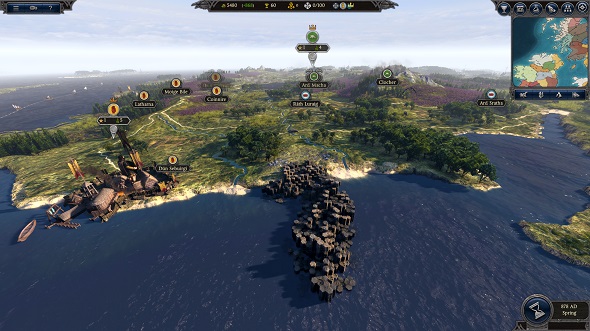 These are all things I knew from Total War: Attila, but had forgotten. And yet, Thrones of Britannia does not wholly shun the influence of its fantastical cousin. This is felt most strongly in factional asymmetries: there are ten playable factions, spread across five cultures, each of which has unique mechanics and troops. They are not as radical as Warhammer’s variations – partly because elves and undead play more differently to each other than human factions do – but they should still offer some decent replay value.

The five cultures are the English, Welsh, and Gaelic Kingdoms, the Great Viking Army – who have settled large swathes of England – and the Viking Sea Kings, who still enjoy a good waterborne raid. I am playing as Mide, a kingdom in the centre of Ireland after which modern County Meath is named. It is one of two Gaelic Kingdoms, with the others being the Scottish Gaels. Both Gaelic factions get +25% income from Church buildings, +2 loyalty, and the key ‘Legitimacy’ trait, which grants more loyalty and other special bonuses for owning your cultural land and defending your allies.

Mide also gets its own factional bonuses, including +20% diplomatic relations with all Irish factions, and the ability to host the Fair of Tailtiu every third summer – a unique event which grants useful public order and loyalty bonuses. It will cost you money, however, and cannot be held if your capital is under siege. Mide’s army roster is also distinct: their javelin skirmishers are especially strong, and they alone can field Gallowglass swordsmen – elite foreign mercenaries. 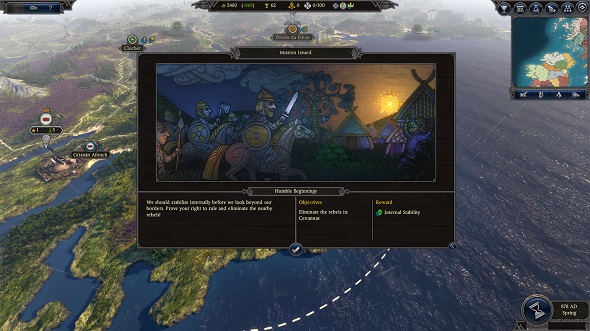 With the respected King Flann at the helm, my enemies are few and far between: the Mide campaign initially tasks me with beating up a rebel army, after which I am informed via an event message that the Vikings are making a play for Dyflin (modern Dublin), an important port. I can defend Dyflin, try to take it for myself first, or not get involved. This is an example of the kind of branching event chains that director Jack Lusted has recently discussed, which aim to give players more choice over the narrative.

I leave the situation alone, figuring I am not strong enough to take on the Vikings, and spend some time poking around the map looking to pick on someone my own size. As I scour the campaign map I notice that, though Thrones of Britannia is built on the ageing Attila engine – and feelsvery much like Attila to play in many respects – it has had a thorough lick of paint. Luscious 2D animations, inspired by Medieval art and metalwork, pop up in UI panels to illustrate events, and the campaign map is gorgeously detailed: deer prance through forests, eagles soar over gurgling mountain streams, and snow blankets the British Isles in winter. It lacks the fantastical flourishes of the Warhammer world – no Dwarven bridges spanning valleys or magical vortices here – but it is still a lovely place to be.

I identify a potential victim, and join Connaught in a war against Bréifne, the only other Irish kingdom with whom I share even a drop of bad blood. It is in the siege of their capital that I lose Flann, after which my friends become enemies with alarming speed and opportunism. My lack of choice until then, though, suggests Mide’s campaign may have a diplomatic bent. There are three victory types in Thrones of Britannia: the standard conquest victory, the fame victory, and the Kingdom victory. Conquest is well understood by now, whereas fame challenges you to grow your reputation in various ways – building famous churches, certain character skills, and again, conquest, will all help. 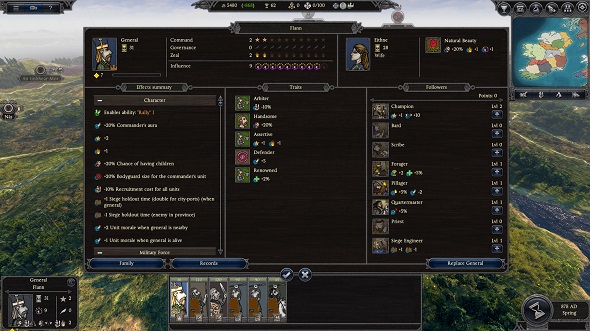 The Kingdom victory should excite history buffs. It considers your faction’s historical aspirations to nationhood and gives you a path to achieve them. Mide, for instance, seek to establish the nation of Ireland, and given their diplomatic buffs and strong initial relations with their compatriots, I imagine their campaign will be one for schmoozers: trading favours and militarising purely to encourage confederation, rather than for direct conquest. Creative Assembly say that AI behaviour will align much more tightly with their personality descriptors in the diplomacy screen – honourable leaders will keep their word and have your back, for instance – so your negotiations should yield more consistent results.

All three of these basic victories have short and long versions, and if you complete any of them in their latter form, you will unlock an “ultimate victory condition” in the form of a “significant endgame challenge,” as CA put it. They are saying no more for now, but it sounds comparable to the arrival of Attila or Archaon in their own games. What similar momentous events might occur in Thrones of Britannia’s timeline? We can’t resist having a guess, but if we are right it may be a spoiler, so skip the next paragraph if you want to avoid that.

Each turn in the build we played was one season, so, though a Total War blogstates that the content in the game can run until 1066, it seems very unlikely we will be expected to play for that long – that would be 752 turns from the start date in 878, when Alfred the Great thwarted the first Viking invasion of England. Our guess for the real endgame is the Battle of Brunanburh, which, as it transpired in 937, comes a more reasonable (but still hefty) 236 turns after the game starts. Fought between English and Gaelic factions, it is seen by many historians as the foundation of modern England, and the most important battle in Anglo-Saxon history before Hastings. Sounds like a fine terminus for the campaign to us, especially for anyone wondering what a Gaelic victory might have looked like. 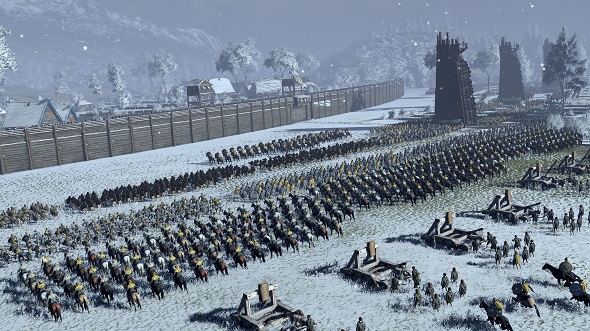 This tighter temporal and spatial focus has affected several systems at the gameplay level, too – most notably, research and militarisation. These are no longer played out across a century or more, so lots has had to change. The tech tree is not as vast, but each technology now has unlock conditions to reflect the need to know something about what you are proposing to improve. If you want a better class of swordsman, say, you will need to recruit ten swordsman units before you can research the upgrade.

Recruitment has had a similarly authentic tweak. Units are now recruited instantly – that same turn, in fact – from a global pool. They will join your army at 25% of their full strength, and then muster up to 100% over several turns, much like replenishment. Recruitment buildings are gone entirely. Instead, unit availability is governed by techs, through which you will add more – and more powerful – units to the global pool.

These kinds of changes are par for the course in Total War: Warhammer, where the Tomb Kings DLC has just casually dispensed with recruitment or upkeep costs, but they are a bit radical by the usual standards of the historical series. Yet they make sense, given the setting and the time frame: units wouldtake a while to muster like this, when turns represent seasons rather than years. Of possibly greater importance, the changes open up some strategic concerns: you can assemble a ragtag force quickly, if you have the gold, but will need some time to prepare for a larger campaign. 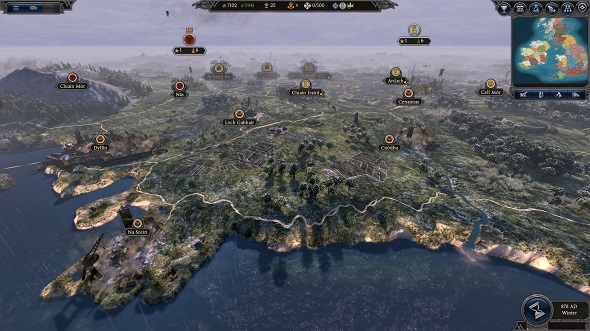 Thrones of Britannia is a new format for historical Total War, and accordingly, it makes a number of innovations – including variable faction mechanics. It is an experiment which likely owes something to the success of Total War: Warhammer, a game that divided the series’ historical fanbase. Thrones of Britannia will reveal the extent of the naysayers’ conservatism: is it anytinkering with the tried-and-true Total War formula that annoys them, or is it just dragons?

Total War Saga: Thrones of Britannia is out on April 19. We will have a full review ready around then, but based on what we have seen so far, this first spin-off is looking like a worthy addition to the Total War canon.