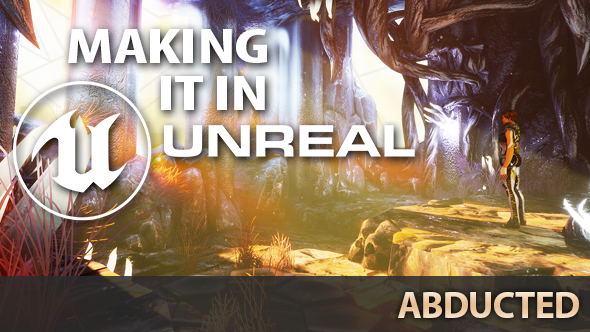 If you picked up an Nvidia graphics card circa 2003, you might have spotted a game called Abducted among the screenshots on the back of the box – a science-fiction adventure about escaping extraterrestrial custody. What you could not know is that shortly afterwards, and long before its release, the startup studio behind Abducted went out of business.

By that time, project lead Richard Cowgill had already drawn up Abducted’s design – a combination of environmental manipulation, dimension-hopping, and long conversations with a device on your arm – and grown quite attached to it. Now, only a decade and a half later, he has been able to bring his ideas to fruition in Unreal Engine 4. That is what you call patience. 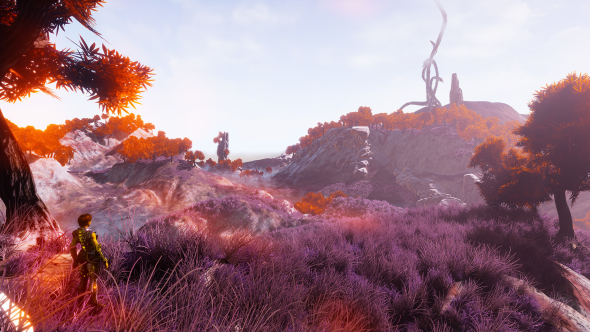 The Abducted that Cowgill had begun building in 2003 featured “a lot of similarities, but a lot of differences” to the one in development now. Key among those differences was the fact that, at the time, third-party game engines were not nearly so accessible.

“Back then there was no game engine,” Cowgill remembers. “We were writing our own, building from the ground up.”

After the studio folded, Cowgill had no choice but to move on – working on Battlefield 2, Borderlands, and a cancelled Duke Nukem game that Gearbox styled as a third-person shooter. But, in the interim, the industry changed. First came digital distribution and the indie boom, encouraging swathes of creatively frustrated triple-A devs to embark on their own projects. And second came powerful development tools like Unreal Engine 4, free and accessible to small teams for the first time.

By coincidence, most of the triple-A projects Cowgill had worked on over the last decade had been Unreal-based. The new engine proved an alluring prospect. “There’s a lot more accessibility and moddability in Unreal Engine 4,” he says. “It’s just a better toolset.”

Finally, Cowgill managed to win back the rights to the Abducted IP, and built a studio named Sunside Games to work on it. 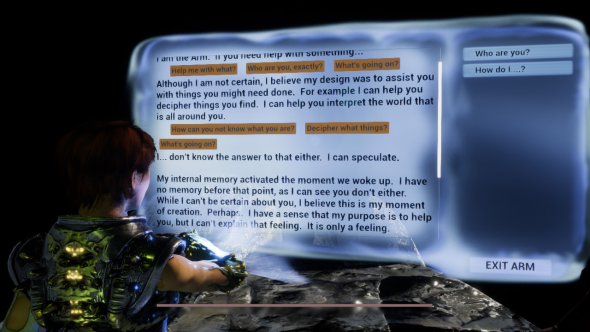 One of the few advantages of Abduction, it turns out, is the alien computer embedded in your arm – a source of information and company throughout the game. Activating the Arm triggers a freeform conversation system, into which Cowgill has poured all of his storytelling and AI ambitions.

“I would love to do a system that passes the Turing Test, that’s the ultimate goal. Maybe in ten years,” he says. “It really starts with that: how can I make it feel like somebody’s on the other end and you’re having a conversation with them?”

In this case, it turns out to be a matter of building a library of conversation as large and complete as possible. Your role as the player is almost journalistic, picking up on any conversational threads that strike you as important and pursuing them. 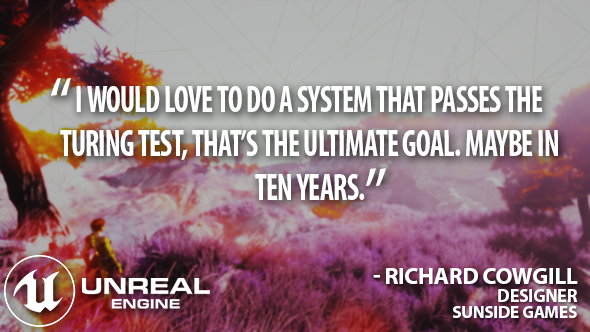 “It’s a lot of thinking about the five main questions – who, what, where, why, and how – and trying to come up with answers for everything,” Cowgill explains. “I’m trying to anticipate the range of player questions and create a conversation system that is with them at almost every point in the game. If they want to ignore it, they can. If they want to dive into it, they can.”

“I’d like to figure out a way to make it more streamlined but I haven’t figured that out yet,” Cowgill admits. “It is complex behind the scenes. It’s a giant snaking chart of stuff connected to other stuff.”

A blueprint for success 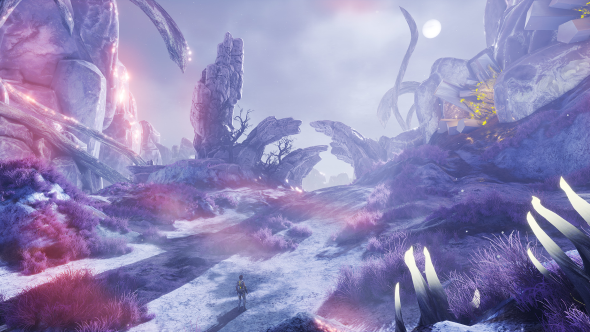 Another of Abducted’s core activities is environmental manipulation – whether for the purpose of restraining potentially deadly objects around you, solving puzzles, creating defences, or opening up new paths. Like the Arm, all of that functionality has been created entirely in Blueprint.

“We’re using every trick in the Unreal tool bag, basically,” Cowgill says. “When moving objects, sometimes what you’re doing is manipulating a level sequence, triggering an animated movie in the environment. In some cases it’s an animated skeletal mesh – it’s got its own attributes and conditions that you’re manipulating into a different state. And that’s usually for stuff like more complicated movement.”

It is clear that Cowgill finds great pride in the fact that he and his team have built Abducted this way, without scrapping any of its more ambitious ideas. The design that has existed solely in his head for so long is now materialising, altered but uncompromised.

“Some of it was very technically difficult, and some of it was written and rewritten, but it was all possible,” he says. “That was a giant load off my mind.”