Acer put Asus’ Republic Of Gamers laptops in their sights with their latest mid-level gaming laptop, the Predator Helios 300. As the cheapest of the Predators, is it truly in the hunt, or will it simply become prey to the competition?

A trackpad isn’t going to save you in a firefight – make sure you go into battle with one of the best gaming mice you can get your mitts on.

This is a laptop meant for the non-oligarchs among us – those of us who don’t live on one giant boat and holiday on another. Acer’s idea is to offer Predator gaming laptops that give us that Predator punch at a more reasonable price. And, at £1,300(with the closest US equivalent being$1,350), the Helios 300 SKU we have our hands on really is cheaper than almost all the other gaming laptops we’ve tested. But if it’s going head-to-head with Asus’ Republic Of Gamers laptops, as Acer says it is, it’s got to survive our test.

Click on the quick links below to jump to a particular section. 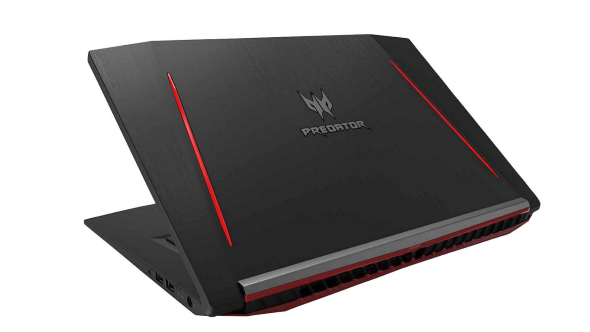 Our Helios 300 is rocking an Intel Core i7-7700HQ CPU with four HyperThreaded cores, a 2.8GHz clock speed, and 6MB of L3 cache. It’s essentially a speed-boosted version of the previous generation’s i7-6700HQ, and is found in pricier machines like the Chillblast Samurai and Gigabyte Aero 15. Crucially, the similarly priced Asus ROG model, the GL702VM-DB71-HID2, ‘only’ has an i7-6700HQ, so Acer at least have them bested on that front.

Acer have opted for Nvidia’s Geforce GTX 1050Ti to handle graphics. This budget GPU choice has helped the cheaper Helios 300 SKUs hit their lower price tag, but will obviously mean inferior performance to some of its competitors when it comes to chewing through all that graphical data.

You’ll also get 16GB of DDR4 RAM split over two DIMMs, taking advantage of dual-channel memory bandwidth. The memory is upgradeable to 32GB if that’s not enough for you, although the stock 16GB should see you through a fair few years yet.

The Helios 300’s chiclet membrane keyboard features a full numpad with skinny buttons to avoid the keyboard dominating the entire width of the laptop. It’s easy to see how this inclusion could be useful for MMOers on the go. You won’t find thousands of RGB lighting options here, though – Acer are keeping the costs down, after all – you’re going to get red backlighting, and you’re going to like it.

For your scrolling needs, there’s an offset trackpad rocking the same tracking tech as the pricier Predator models, but unlike them the Helios 300’s mouse buttons are, infuriatingly, integrated into the bottom edges of the pad itself.

Included as standard is the foolproof overclocking software, Predator Sense. Designed for beginners who want to try their hand at overclocking without risking damage, it lets you adjust fan speed and clock speed to your liking. Fan speed is on Auto by default, but you can customise the speed or ramp them up to their maximum. Clockspeeds are also configurable to Normal, Faster, and Turbo settings for a quick speed boost with minimum fuss.

Both a 128GB SSD and a 1TB HDD are in residence, hoping to provide both speed and space. The SSD’s obviously not enough to jam half your Steam library on, but it’ll be enough to use as a boot drive with spare space for a couple of your favourite games, while the 1TB disk drive will deal with the brunt of the storage.

To power all this tech, you get a four-cell, lithium polymer battery with a quoted maximum run time of seven hours – of course, we’ve tested out the battery life below to see what you’ll be getting in real-life gaming terms.

The Helios 300 is fortunately light enough for most people to carry. Don’t expect it to be light, though – this is still a /gaming/ laptop and comes in a little below three kilograms, so you’ll definitely be feeling it in your backpack if you need to game on the move. 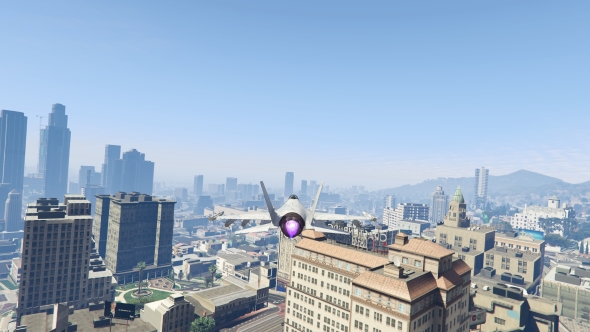 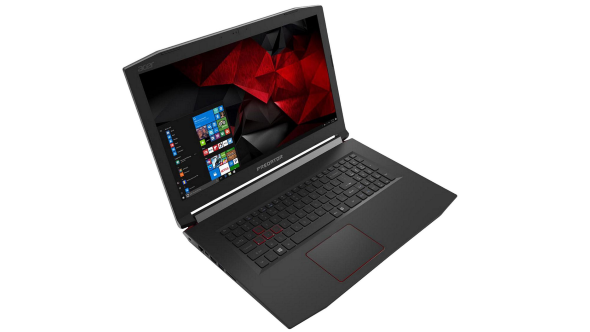 First things first – the numbers. When it comes to CPU intensive tasks like Cinebench and X264 v5, the i7 7700HQ performs admirably, with the bumped-up clockspeed placing it firmly in the top third of the laptops we’ve tested.

As for graphical performance, the GTX 1050Ti under the hood means you aren’t getting the frame rates of the GTX 1060s the competitors (or other Helios 300s) are working with. With Rise Of The Tomb Raider at 1080p and the graphics settings turned up high we were getting just over 41fps. So if you’re planning on running the latest games you might have to make some graphical concessions to ensure a nice smooth frame rate.

Thankfully, as it’s an Nvidia-powered laptop, you get all the GeForce Experience goodness, which will automatically select the best game settings for your hardware. On gaming laptops you can also configure it for specific battery-saving settings too.

If at all possible, we’d recommend you avoid using the laptop’s trackpad. The tracking is plenty good enough for the broad strokes you’d make when browsing, but the left and right switches integrated into the bottom portion of the trackpad put up too much of a fight before clicking, feel flimsy when they do, and end up coming off as an imprecise afterthought.

The keyboard is your standard membrane fare – functional but ultimately unsatisfying to use. However, to complain about space-saving switches on a laptop too much would seem daft – as much as we love the mechanical switches on the Predator 21 X, have you ever tried to fit one in a backpack? No, that’s right, it comes in a flight case…

The 17.3-inch panel is plenty for on-the-go gaming sessions in terms of size – as mentioned above, when presented with the option we’d go for the smaller version and save the money. Although it fell a little short of perfection in our contrast, brightness, and gamma testing – unable to display extreme highs and lows with clarity – you’re not going to find the serviceable image quality to be a deal-breaker. After all, perfect clarity and super-high definitions are what pricier laptops are for.

At full chat you’ll definitely be hearing the fans, but it’s not nearly enough to wind you up mid-game, especially given the truly impressive volume the stereo Dolby Audio speakers can get up to. The sound is obviously not as detailed at the high end and punchy at the low end as you’d get with dedicated speakers or a good set of gaming headphones, but I was pleasantly surprised by the decent amount of detail and overall oomph I got.

The metal chassis feels exceptionally sturdy too – the lid isn’t easy to flex, the keyboard doesn’t bend under force, and you get the distinct impression that you could drop the Helios 300 down the stairs and it would survive. I mean, obviously don’t, though.

Unfortunately, the looks aren’t as impressive. The angular, red-and-black look comes off less like a jet fighter and more like a child’s toy, with the fingerprint-magnet, brushed-metal lid making the Helios 300 look tackier than it actually is. Of course, if you’re not taking this thing into business meetings the looks aren’t going to cause much of an issue, but the Predator series could to do with an appearance update.

The battery life is also a sticking point. At 49mins in our 3D gaming test, it’s barely enough to last through your morning commute. This score puts the Helios 300 right at the bottom of the pile, with laptops like the Gigabyte P55 running the more demanding GTX 1060 GPU and still giving you two-and-a-half hours of game time. 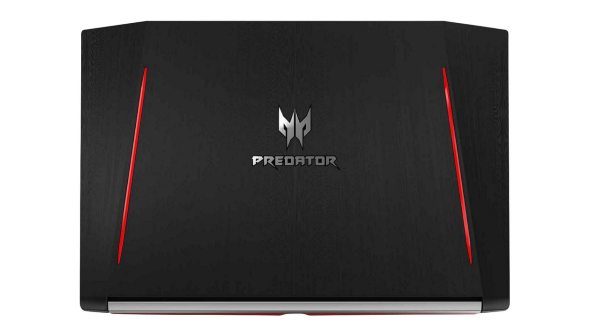 Seeing as this is a £1,300 laptop – not exactly a small investment – you’d be right to expect some serious performance for your money. Does the Helios 300 provide?

Well, yes and no. As the benchmarks show, its Intel i7 7700HQ CPU can blast through multi-core tasks with the best of them, but the GTX 1050 Ti GPU has it falling behind in the all important frame rate department. The GTX 1050 Ti is a capable GPU in its own right, and you’re certainly not going to be reduced to playing nothing but indie games, but there’s a mismatch in using mid-range graphics tech with a high-performance processor. The Core i5s included in some other versions of the Helios 300 should more than do the trick.

As much grief as I’ve given it about its trackpad and appearance, this is a decent machine for mid-level gamers who have their hearts set on a laptop. It gives you a mostly well-made gaming rig that covers the basics and will serve you well in the vast majority of titles for a couple of years while you save up the serious money needed for a fancier model. One fact still remains, though: you can make a significant saving by dropping to a version with a 15.3-inch screen (1080p gameplay really doesn’t require the 17-inch one) and an i5 processor – a £200 saving, in fact.