With Adventure Time: Pirates of the Enchiridion, Cartoon Network’s loveable TV animation has been turned into an open-world RPG at long last. Given that the show features BMO, a living games console, and is inspired as much by videogames as it is by Dungeons & Dragons, it’s about time it got its own PC game. And what better genre to burst onto the scene with than one of the most popular of the moment?

Set in the Land of Ooo, you’ll be helping the series’ intrepid heroes Finn and Jake as they journey to save their home continent after it has unfortunately been flooded due to some nasty magic gone awry. Waking up to some wet feet and no idea what’s happened, Finn and Jake set out to unearth just what’s going on in Ooo, and pull the plug on the sudden mass of water that’s engulfed the region.

Pull your head out of the water and stop splashing around with the best RPGs on PC.

If you need some help on your quest to save Ooo then we’ve got you covered. Here are our Adventure Time: Pirates of the Enchiridion tips to get you going swimmingly. 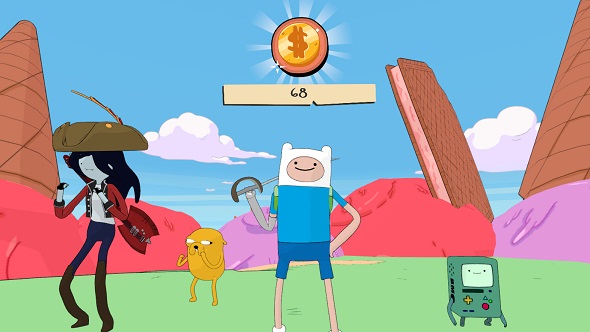 Even the Land of Ooo can’t escape the grasp of capitalism. In Adventure Time: Pirates of the Enchiridion, you’ll be spending cash like it’s going out of fashion. Dollars are the only resource in the game, meaning you’ll be using your well-earned bucks to not only buy items, but also upgrade each of the playable characters.

With this in mind, you’ll want to do everything you can to keep a steady stream of dollar bills flowing, whether that’s smashing every breakable item in sight on your travels across Ooo, completing side-quests, or grinding battles. Finn’s overworld ability also allows him to locate treasure chests, using vantage points and jotting them down on the map, and it’s worth plundering each of these chests for some serious booty. 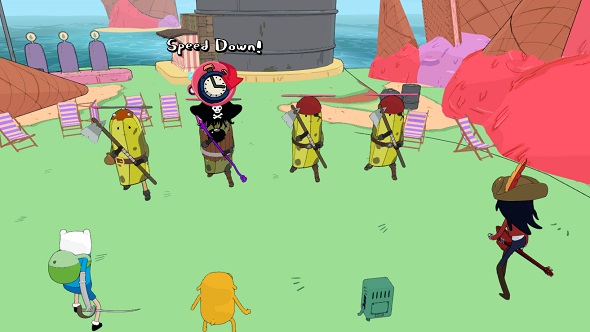 Each of the game’s four party members – Finn, Jake, Marceline, and BMO – have an abundance of upgrades for you to drop money into. Ranging from your run-of-the-mill health and attack upgrades, to increasing accuracy, blocking ability, and each character’s special abilities. You’ll find out soon enough that there just isn’t enough cash to go around in order to upgrade everything.

Taking that into account, we found the most useful upgrades to invest in were the health and attack upgrades – you’ll want to be able to survive a nasty hit, but also be capable of giving it back out twice as hard. Marceline’s health regeneration ability is also a great upgrade to invest in as it allows her to recover a lot of health instead of attacking. 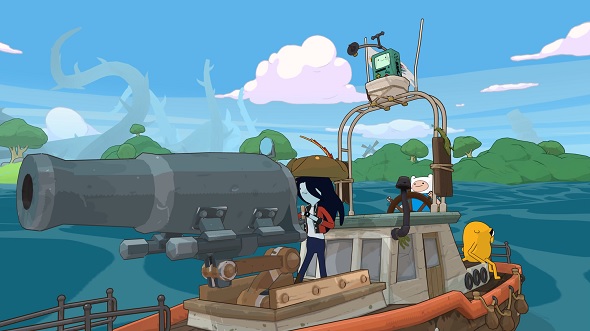 Adventure Time: Pirates of the Enchiridion isn’t a long game so you’ll want to tackle its slew of side-quests. But getting the most out of it isn’t the only reason to do that. Completing side-quests is one of the only ways to acquire each party member’s special abilities, which become increasingly useful as the game progresses.

Most of the side-quests are pretty chill and don’t often deviate from the standard fetch quest formula. This makes them a quick and easy way of expanding your party’s options in battle, and going into the late-game brawls without some abilities (Jake and Marceline’s in particular) will make boss battles an absolute chore. Late game side-quests also offer some hefty cash rewards, making them a worthwhile time sink if you’re looking to stock up on items or power up your party.

Items are your best friend 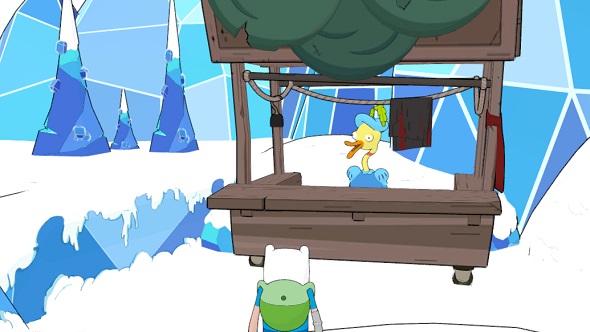 Choose Goose is known in the TV show for being dressed in eccentric clothing and having a peculiar voice. He’s also a peddler of all sorts of mostly useless antiques. In Pirates of the Enchiridion, Choose Goose acts as the game’s one and only merchant, but thankfully his inventory is significantly more practical.

When you find Choose Goose it’s worth stocking up on the basics, like small and large heart vials – which heal individual party members – and small apples – which heal the entire party – every time you see him. Choose Goose never stocks items in huge numbers, however, he will restock items after a while, so it’s worth rinsing his shop whenever you spot him as you’ll be using a lot of items over the course of the game.

This is true until you recruit BMO, at least, as that’s the only character who can heal the party with a special ability. Also bear in mind that you can heal and attack during a turn in battle, so having a good stock of items to hand is vital to make it through longer battles.

Travel doesn’t have to be a chore 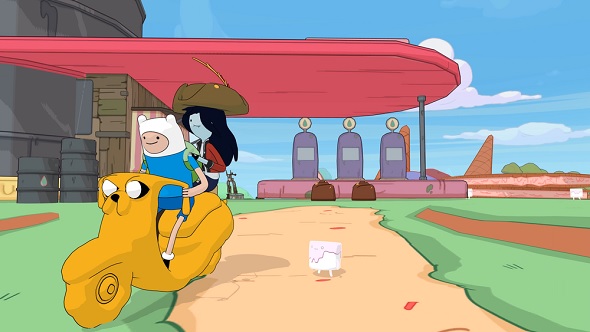 Each party member has a unique ability to use in the overworld: Finn can use vantage points to spot treasure; Marceline can open chests and turn invisible; and BMO can open locked gates.

Jake has the ability to stretch and grow his body to climb up ledges and cross gaps, but he also has another pretty sweet ability that the game doesn’t tell you about – he can turn into a moped. Yes, you read that correctly. Jake is capable of contorting his body into a brightly coloured scooter, complete with engine noises made with his mouth.

Not only is this ability funny, it’s the best way to travel around the islands of Ooo, especially with all the fetch quests and tedious walking pace of the rest of the cast. 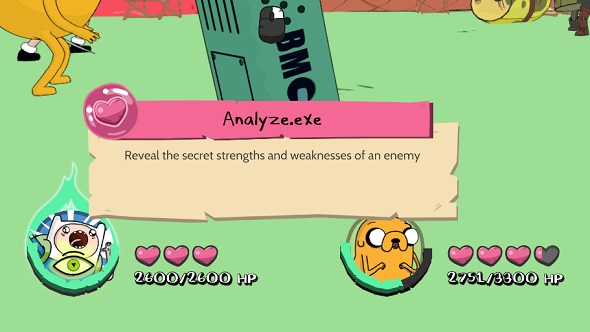 Enemies can have an exhausting amount of health in Pirates of the Enchiridion. We haven’t got all day, have we? So, to save time, you’ll need to analyse your foes to exploit their weaknesses.

One of BMO’s abilities lets you scan an enemy to discover elements and status effects they’re susceptible to. If an enemy is weak to ice, use Finn’s ice abilities to deal massive damage and potentially freeze your enemy, preventing them from attacking. Choose Goose also stocks plenty of status afflicting items and gems that allow you to deal specific elemental damage for a number of turns, so make sure to stock up.

It’s also important to pay attention to character behaviour in battle. If an enemy is gearing up for an attack that will deal a huge amount of damage to your party, focus your attention on them before taking anyone else out. Similarly, if a foe is blocking, dramatically increasing their defences, pivot your attention towards other enemies to maximise your turn efficiency. 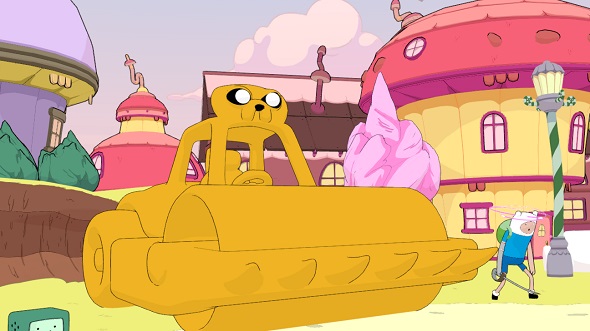 Special abilities see your party members unleash their best moves. Jake transforms into a giant bulldozer while BMO busts out a groovy dance to heal the party. But there are certain requirements each character needs to meet in order to build the special meter before you can use these abilities.

Finn and Jake’s are simple as their meters increase when they deal and take damage, respectively. It gets more complicated with Marceline and BMO, however: Marceline only builds her meter when dealing the final blow to an enemy, and BMO’s rises when using items. It’s important to always keep this in mind, as special abilities can easily turn the tide in battle and get you out of a tight spot. It’s also a great idea to build each character’s special meter and then save it for an upcoming boss battle.