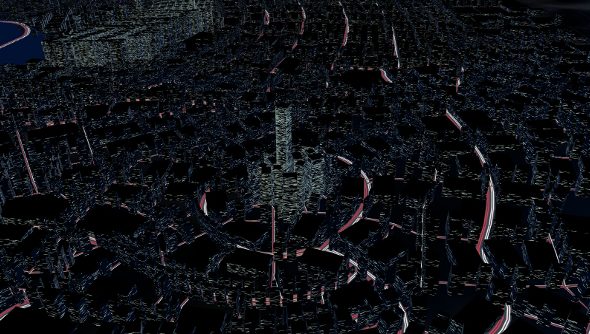 Part of my job is to keep track of groovy games, but gosh, there are so many of them. There always are, but in the era of Kickstarter and fascinating indie projects constantly rushing toward me, I sometimes miss a few. I missed AdvertCity’s launch in April, which is especially sad, because I was extremely keen when it was unveiled on Kickstarter, last year.

Maybe you’ll forgive me for this lapse if I tell you that it’s about to have a second launch, this time on Steam. You’ll be able to pick it up there tomorrow, and then start building up your cyberpunk advertising empire.

Here’s a new trailer if you need to catch up:

AdvertCity was originally the product of a cyberpunk game jam, and puts you in charge of an advertising empire. The goal: saturate a procedural cyberpunk city with ads, both in cyberspace and meatspace, until you take over all of the megacorps with your ill-gotten gains.

You’ll need to think about what sorts of clients you want to take on, and what ads you’ll be plastering all over the city, not just because you’ve got a reputation to worry about, but because those ads will influence the economy of the city.

Cyberpunk, money and sims: three of my favourite things squashed together. Does it tickle your fancy?