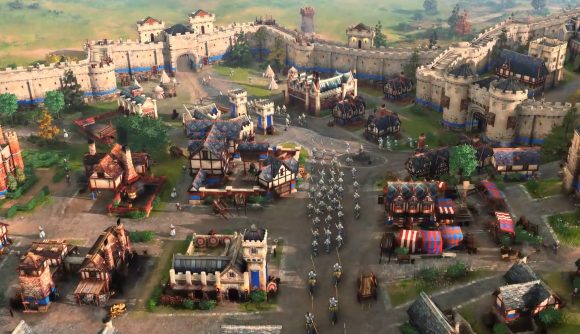 As a series Age of Empires is known for its meaty campaigns, and it looks like Age of Empires 4 will be no exception. According to the game’s creative director, the option to get your teeth into hours-long campaigns will be there, but it’s not the only choice you’ll have – the devs are exploring a range of other game modes for those with “more modern sensibilities” too.

In an interview at X019, Adam Isgreen tells us, “I would say, classically being an Age of Empires game, I think how we would address [game length and pacing] is, you can still have that game that goes two hours if you really want to, but because we recognise that people have more modern sensibilities, I think that we’re looking into all these different kinds of game modes, and ways that the game can be played and explored.”

According to Isgreen, the choice is yours: “You don’t have to commit to a two hour game, but you can if you want. Because, that’s a factor of Age of Empires that we didn’t want to lose – having epic battles with huge cities, with walls and siege, and that being so important now.”

Referencing the Age of Empires 4 trailer shown at X019 (check it out below), he said, “You can fight on walls, and you can take walls down, and there are all these fun ways to siege, and fight on the wall or over the wall. We wanted to make sure that all of that was still a part of the game.”

While he sadly couldn’t tell us more about what the game modes the devs are looking into might be just yet, whether you’re a fan of those “epic battles,” quicker siege sessions, or somewhere in between, it looks like Age 4 will have something for you.

At X019, Isgreen also let us know that Age of Empires 4 still has four ages, but some civs might break the rules, and that AoE4 has a “wide spectrum” of civs, from familiar to very different, with some pretty big surprises in store for players thrown in.