Six years ago Games Workshop expanded their venerable Warhammer Fantasy Battle wargame by introducing the new, sexy Age of Sigmar. Out went the quasi-medieval Old World with its blocks of grubby foot knights, in came the multi-dimensional Mortal Realms and shiny, superhuman Stormcast Eternals. It had a warm reception – by which I mean one guy was so disgusted he set a thousand dollar model collection on fire – but six years is long enough for new blood to discover and adopt the setting.

Barring a couple of digital card games and autobattlers, Storm Ground is Age of Sigmar’s first major outing in videogames – and you can buy it here, coincidentally. So, does Storm Ground land like a thunderbolt hurled from Azyr, or bubble up like a swampy fart in the rotten cauldron of Nurgle?

The Age of Sigmar is a time of ceaseless war between the many Gods and their servants. Three factions feature in this turn-based strategy game, the lightning-riding Stormcast who serve beardy, hammer-fixated Sigmar, the Maggotkin of the plague god Nurgle, and the Nighthaunt, ghostly slaves to Nagash, lord of Undeath. They’re all more or less immortal – killing a Stormcast sends their soul back to the realm of Azyr to be reforged on a big magic anvil, Maggotkin go back to the loam in Nurgle’s manky metaphysical compost heap, and the ghosts are kind of already immortal.

That feeds into Storm Ground’s tactical, roguelike gameplay. You lead a champion and a band of followers through a series of turn-based battles in an enemy fortress, acquiring loot, skills, new recruits, and lore on your way. Followers who fall in battle can be resurrected with a miracle should you be lucky enough to find one, but losing your champion ends your run and sends them back to their god’s basement to count their XP and sulk. Each faction has a narrative campaign, with a jaunty, pulpy plot by Warhammer novelist Robbie MacNiven that’s delivered with appropriately hammy voice acting. 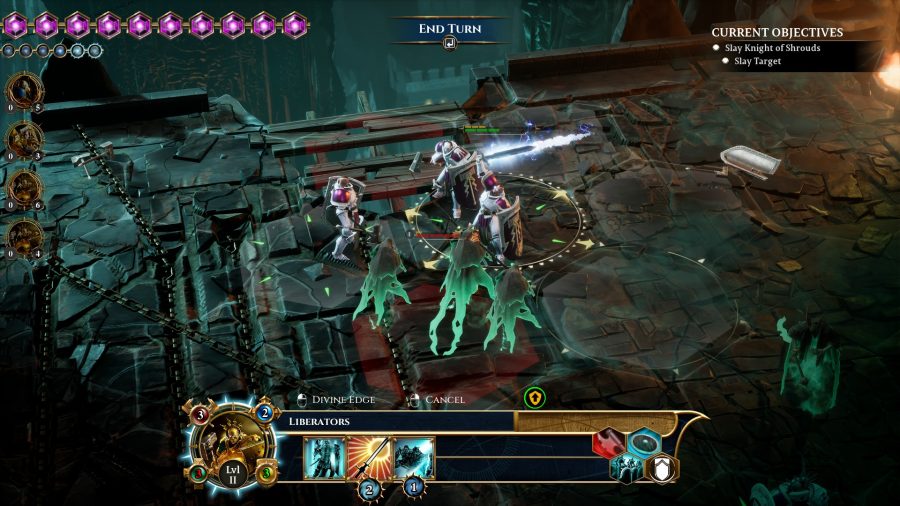 Battles have a satisfying rhythm. You start each round with a set budget to summon different followers, and any spare power is distilled into Aether, which fuels your more potent abilities.

Memes for the Meme God

Warhammer videogames have a proud history as meme fodder. I have high hopes for one soundbite I encountered early in the Nurgle campaign, when a Stormcast wizard sternly warned my hero: “I will burn out your taint!”

The abilities of each faction reflect their lore: Stormcast are a band of warriors who buff one another and retaliate when their allies are harmed the Nighthaunt attack in ghostly hordes and gain an advantage by debuffing their foes, and the Nurgle play a fungal minigame as they spread corruption over the battlefield to hinder their foes, buff their troops, and harvest nutrients to charge their strongest attacks.

There’s plenty of intricacy in Storm Ground’s combat system, but it’s let down a little by some AI blunders. The first Nurgle campaign wraps with a staged battle against a host of Stormcast wizards binding a Greater Daemon into a gargantuan, gross hellmouth. Your goal: shiv the wizards in their magic kidneys to stop the ritual, but they’re being guarded by some burly angels called Prosecutors. This goes hilariously wrong for the Stormcast when their head wizard summons an enormous lightning vortex without checking the flight path – not only does the wizard yeet one of his own underlings back to Azyr, his bodyguards then express their solidarity with their dismissed comrade by hurling eight-foot-long javelins into the head wizard. 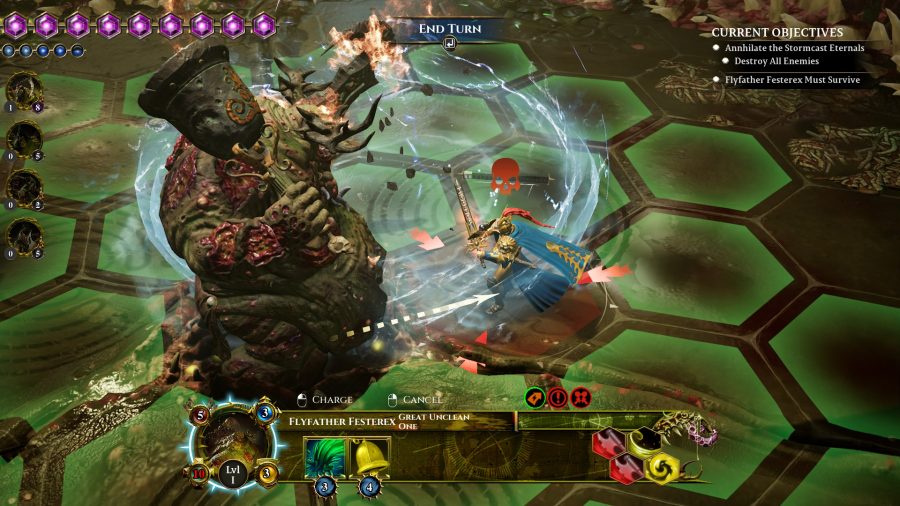 The AI isn’t the issue. A few bugs in the Nurgle campaign end up being thematically appropriate for the Plague Lord, with dead units failing to despawn, enemies floating from hex to hex instead of walking, and a T-posing Great Unclean One keeping me on edge throughout the campaign.

The soundscape is solid, but there could be more variety, especially when AI barks and audio loops start to repeat after the first couple of hours. This is particularly irritating with channelled abilities that play their sound effect every turn as they wind up – for the sake of your sanity, eliminate Chainghast units with extreme prejudice.

Minor gripes aside, I’m keen to go back in for more, and to try out each faction in multiplayer when it’s live. There’s a lot of scope for creativity with Storm Ground’s combat mechanics, and this is a great showcase of what Age of Sigmar can be. I would welcome DLC for other factions to see how Gasket Games represent the eel-riding Idoneth or fungus maddened Gloomspite. 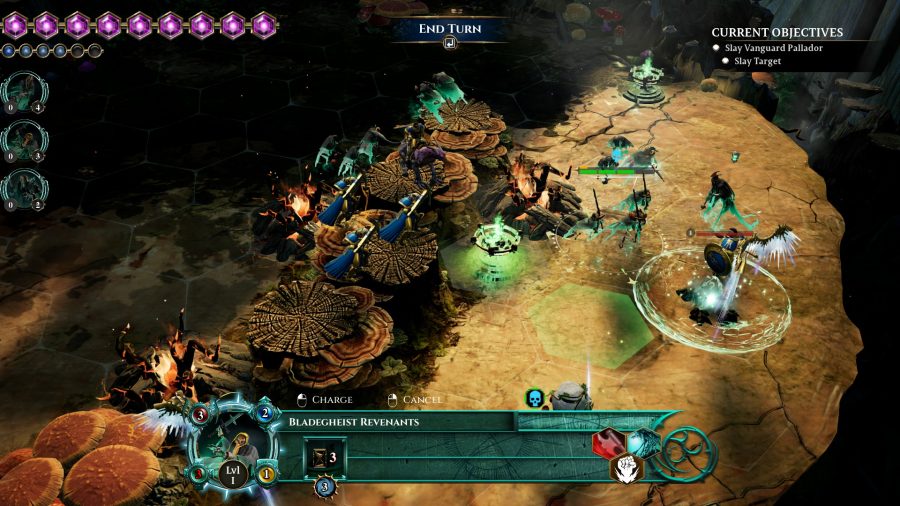 Neat added touches like an army painter tool to recolour your forces, serve as a sure sign that the studio understands Warhammer fans. This probably won’t be to the Mortal Realms what Total War: Warhammer has been to the Old World, but it’s a fun entry point to the setting for newcomers and a solid representation of it for existing fans.

Warhammer Age of Sigmar: Storm Ground is out now, and you can buy it here. If you’re curious about Age of Sigmar armies and starter sets then our sister site, Wargamer, has you covered. We’ve also got a roundup of the best strategy games on PC in case you’re looking beyond Games Workshop for your next strategy gaming fix.

With flavourful combat mechanics for each faction and a cast of bombastic characters, Storm Ground is a worthy introduction to the Age of Sigmar setting that's marred by some rough edges.