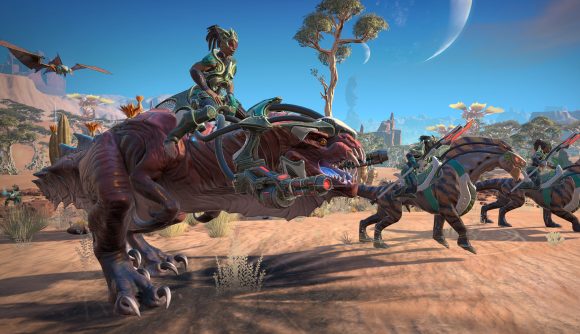 Age of Wonders: Planetfall takes the usually fantasy-driven strategy series to a sci-fi setting, and now we finally know when we’ll be able to get ahold of it. Planetfall will launch on August 6, 2019. The release date announcement for the fourth Age of Wonders (give or take) has brought us a new trailer setting up the story, as well as details on all the various editions now available for pre-order.

The Standard Edition, priced at $49.99 / £41.99 / €49.99, naturally gets you just the game itself. The Deluxe Edition – $59.99 / £50.99 / €59.99 – brings you a Bravado Bundle cosmetic pack with a “really boss bandana,” a Spacerpunk cosmetic pack, and an Infested Worlds scenario planet which challenges you to survive a world overrun by strange plants and animals. This version also brings a digital artbook and soundtrack.

The Premium Edition – $89.99 / £69.99 / €89.99 – gets you all of the above plus the game’s season pass, which promises “three upcoming expansions” alongside an “instant reward.” If you want to throw caution to the wind and pre-order any version, you’ll get a Paragon Noble cosmetic set for a distinguished look.

You can get a feel for the tone of the game – and its 80s bombast – in the new trailer below.

Despite a massive shift in setting, Planetfall is still coming courtesy of the original series developers at Triumph Studios. We spoke with the developers around the announcement last year to find out more about their attempt to blend sci-fi history and 4X.

We’ll find out how the shift pays off when Age of Wonders: Planetfall launches on August 6. In the meantime, I joyfully note that this game has units mounted atop dinosaurs, and that’s enough for me to be excited.