Much like when you exercise, the harder your processor works, the hotter it gets, making a CPU cooler one of the most important investments you can make. Choose the wrong cooling solution and you risk your system overheating and shutting down. There are three main types to choose from: air coolers, all-in-one (AIO) liquid coolers, and custom open loops.

Open loops often provide the best temperatures and can even cool your graphics card and RAM alongside your CPU, but it’s noticeably more expensive and can be very fiddly to set up and maintain unless you’re an enthusiast, not to mention the difficulty you’ll have swapping parts when you upgrade. Both AIO and air coolers are far more accessible with their plug-and-play nature, meaning you’ll spend less time building and more time playing your favourite games.

When choosing between an AIO and air cooler, it’s important to balance cost, overclocking potential, noise, style, and compatibility. Here’s everything you need to know about both kinds of coolers, including how they both work, their differences, and which is right for you.

Let’s start with the most popular method: 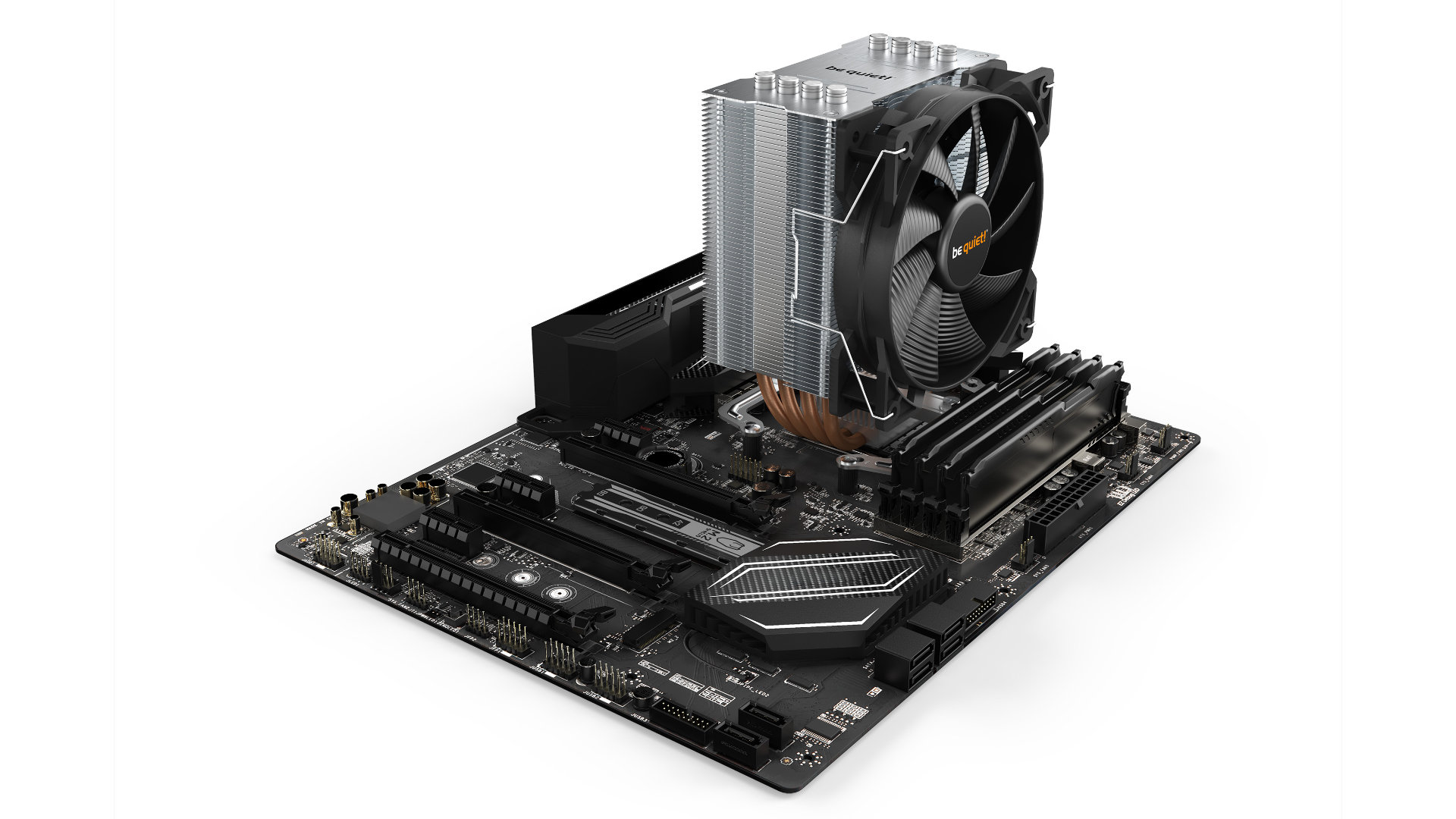 Air coolers are the most common solution because of how cost effective they are. While they come in many different shapes and sizes, most air coolers use a collection of copper pipes to dissipate the heat from the CPU towards a group of metal fins. These are then cooled by at least one fan blowing air through the fins and into the larger case.

Why should you use an air cooler?

Simply put, your wallet will thank you. Air coolers cost much less than their AIO counterparts because they’re fundamentally simpler in design and use cheaper materials – without sacrificing quality. Be quiet!’s Pure Rock 2 starts at just £29.99 and supports most modern Intel and AMD processors, so they certainly don’t break the bank. AMD Threadripper CPUs are the only exceptions, requiring specific coolers like the Dark Rock Pro TR4.

Air coolers only have one mechanical part, meaning they're much easier to fix if things go wrong

There’s a greater quality of life to air cooling in that there’s really only one mechanical part that needs replacing should something go wrong: the fan. The heatsink itself is passive and shouldn’t be at risk of fault unless it’s not properly secured. Replacement fans are also pretty inexpensive if you opt for Be quiet!’s Pure Wings 2, but it’s worth paying the premium for the high-end Silent Wings 3 if you want a whisper-quiet gaming PC. Just make sure you get the right size for your cooler.

Air coolers are perfect if you’re not looking for a big project, as they’re easier to install than AIO counterparts. It’s just a case of attaching the fan(s) to the heatsink, choosing the right bracket for your motherboard, applying your thermal paste, screwing it on, and plugging it in, with no extra radiators in sight.

And while the failure rates of AIO coolers are pretty low, it’s understandable that running liquid in your expensive PC might make you feel uncomfortable. You’ll be able to breathe easy with air coolers, knowing that absolutely nothing can leak onto your components.

Tower coolers: The most common type of air cooler, usually equipped with at least one fan that faces to the side. The aim is to push air out of your PC in the most efficient way possible, which is usually from bottom-right to top-left. Once you’ve figured out if your case can fit a tower cooler, the next step is choosing whether you want to save some money with a single fan option like the Dark Rock 4 or pay a little more for better temperatures with the dual fans on the Dark Rock Pro 4.

Slim coolers: While you’ll still need to consider clearance with a slim cooler’s height, the thinner width leaves plenty of room for high-profile RAM modules. These usually come with a single fan, like the Shadow Rock Slim 2.

Top-flow coolers: Uses a panel-facing fan that pushes air back down towards the motherboard. This is used to cool your motherboard and RAM a little better, and many consider it to look a lot more stylish. The Dark Rock TF 2 comes with two premium Silent Wings 3 fans to keep your components cool.

Low-profile coolers: These generally use a single-fan top-flow approach to take up less clearance space. This lets you use air cooling in small form factor (SFF) PCs without paying the premium for an AIO. The Shadow Rock LP is only 75mm high, meaning it should fit in just about any chassis. 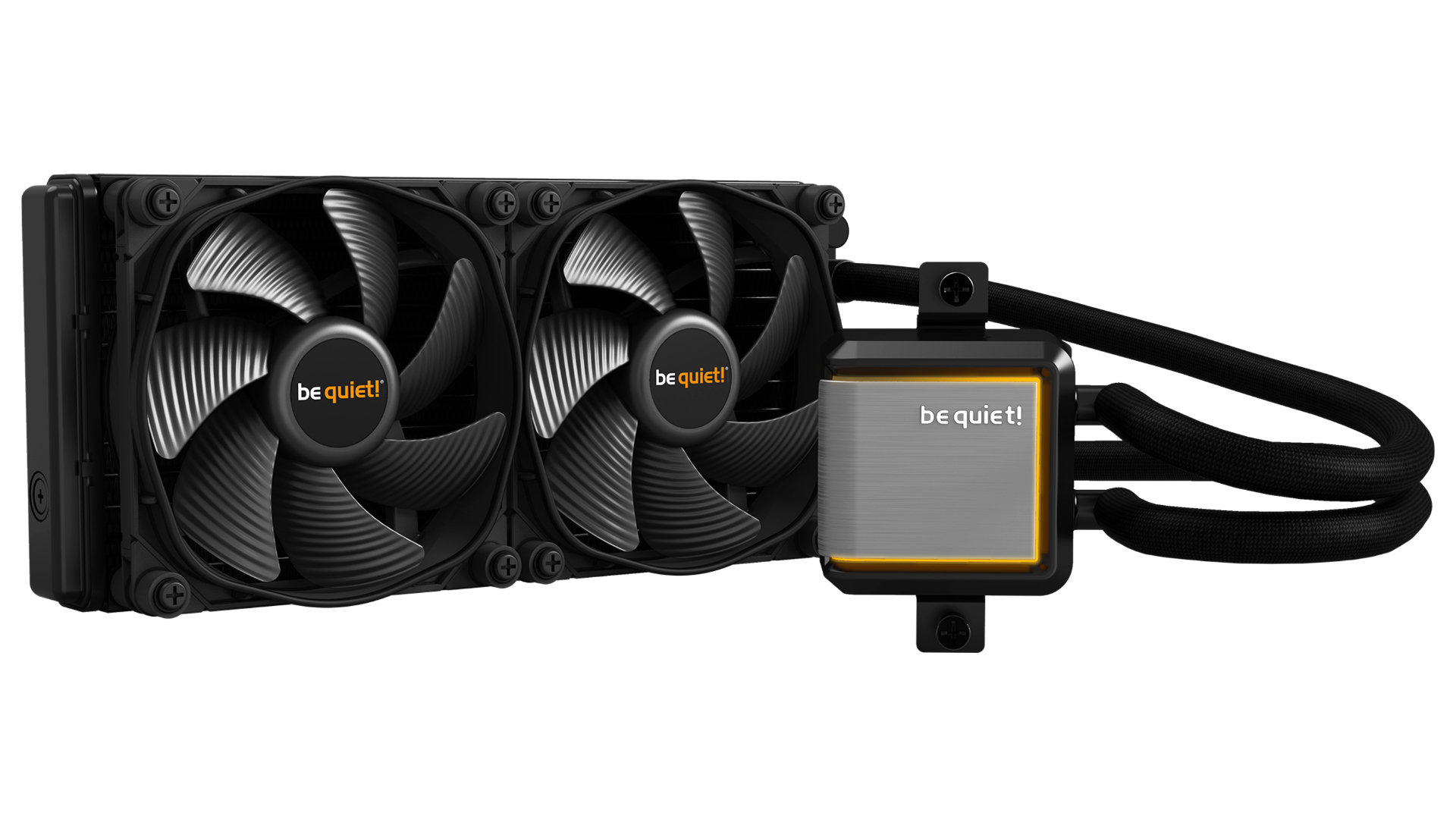 AIO coolers work in the same way as custom loops, but instead of piecing the tubes together yourself, they’re self-contained units that plug and play without any extra fuss – hence the term ‘all-in-one’. The block you attach to the CPU transfers the heat from the chip to the liquid. The pump then pushes the heated coolant through one of the two tubes to a radiator that’s connected to your case’s fans to cool down, before returning through the second tube and repeating the process as long as your gaming PC is switched on.

Why should you use an AIO cooler?

Just as a swimming pool cools you down quicker than a fan, AIO coolers are much better at chilling CPUs than air. This allows you to get the most out of more powerful components because you can overclock your processor to make it faster without temperatures rising too high.

The block on an AIO cooler is also much slimmer than the heatsink on an air cooler, including the low-profile ones. This greater clearance means it’ll fit in smaller mini ITX cases without issue, but you’ll still need to pay attention to the mounting points on your chassis and the size of the attached radiator, which usually come in 120mm, 240mm, 280mm, or 360mm versions. Remember, though, bigger radiators dissipate heat more effectively.

Be Quiet!'s Pure Loop and Silent Loop 2 AIO coolers are the only ones to include a refill port

Installation isn’t quite as simple as an air cooler, but it’s still far easier than a custom loop. You’re only required to apply thermal paste, screw the block down, plug it in, and attach the radiator. You’ll need to put some thought into where you want to position the radiator, however. There’s little difference in terms of push or pull configurations, which describes what side of the radiator that the fans are connected to, but we recommend placing it as an exhaust at the top or rear of your case so the hot air is blown away from your components.

Most AIO coolers have their days numbered because liquid naturally evaporates over time and you can’t access the coolant to replace it. Be quiet!’s Pure Loop and Silent Loop 2 change the game by including an easy-access refill port so you can top it up or replace it, prolonging the lifespan of your AIO.

Since AIO coolers come with fans, you won’t escape the need for air cooling in its entirety, but the radiator sits in the same space your case fans would otherwise be, so you’re not adding any more into the mix. 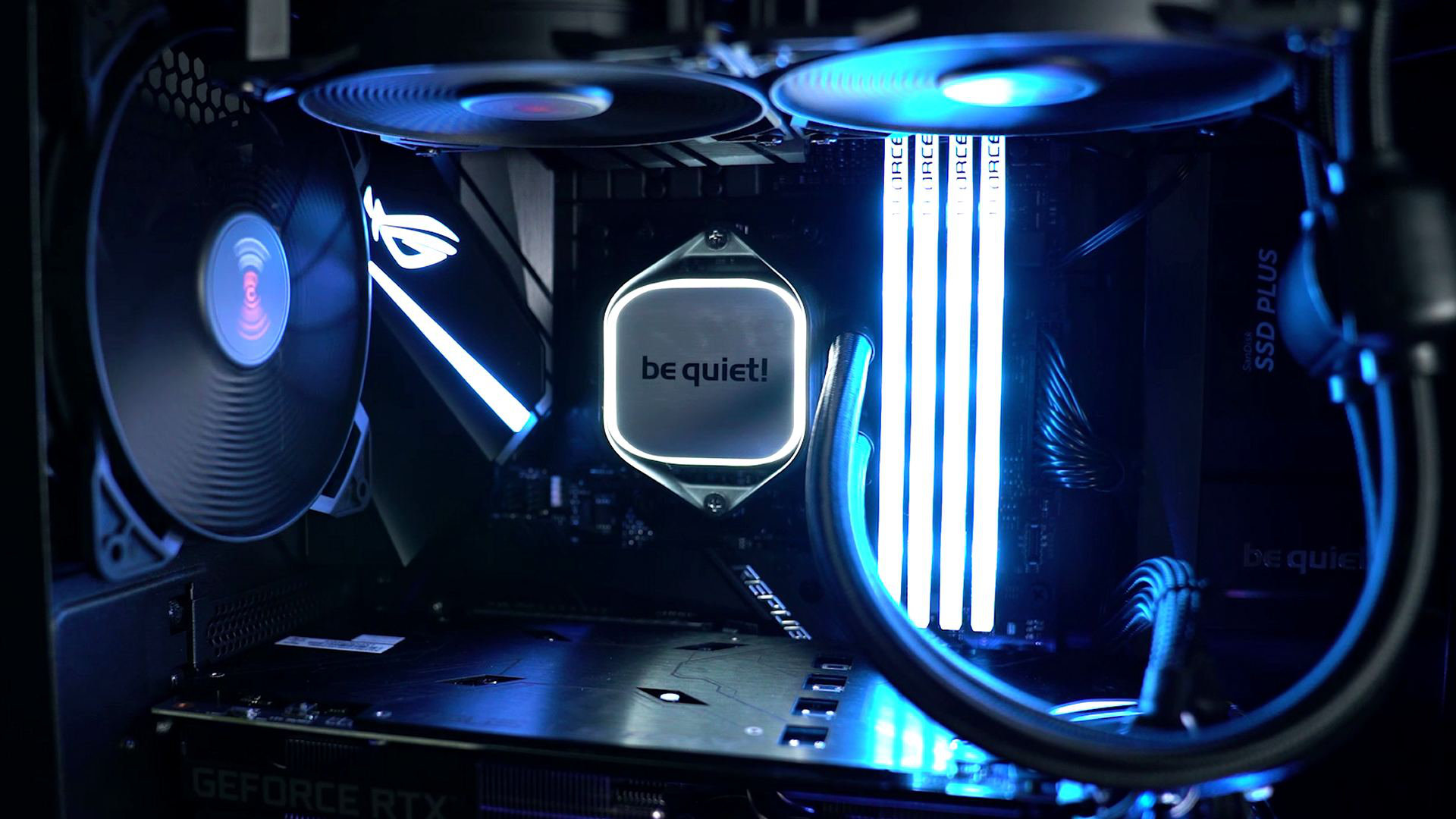 Should you use an AIO or air cooler?

Air coolers will suit most use cases if you’re happy with your CPU’s default clock speed and don’t intend to tinker with it. They require next to no maintenance aside from the odd clean, but you should occasionally dust the inside of your PC regardless of what type of cooler you choose. They’re budget friendly, and should be able to handle most modern games at a reasonable frame rate.

AIO coolers are better in almost every way, since they’re cooler and generally more compatible with different cases, but they do come with a premium price tag and require more effort to install. They’re best suited if you want to overclock your CPU to make it faster, ensure effective cooling in a small form factor case, or if you choose a high-end option, to give your rig a splash of customisable RGB lighting.