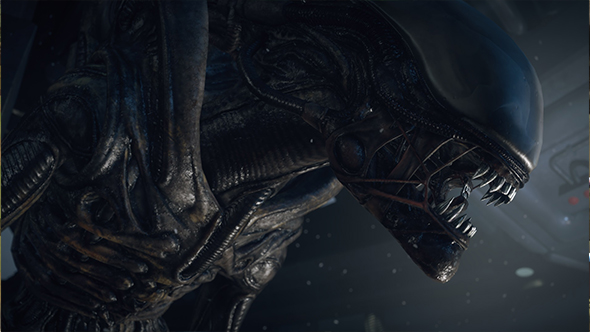 November 2, 2018 We might see that new Alien game soon, if predictions about the first Game Awards teaser are correct.

Earlier this year, Fox announced that a studio was at work on a new game set in the Alien cinematic universe, and it looks like we’ll find out more very soon. Geoff Keighley has provided the first tease of new announcements for The Game Awards 2018, and it looks very much like an Alien game.

The teaser image shows the phrase “worlds will change” repeated over and over in a font thoroughly appropriate for 70s sci-fi, along with a giant ‘W’ in the upper left corner. Alien’s Weyland-Yutani Corporation has a similar logo, and its “building better worlds” slogan is pretty similar to the one that’s shown here.

That’d be a slim connection to make if not for the fact that we know an Alien game is in development – one featuring a persistent world. That info came earlier this year, along with news that FoxNext Games had acquired Cold Iron Studios to work on the new title.

The Game Awards would be a natural place for a proper reveal of that game, since Geoff Keighley’s award show tends to broadcast a cavalcade of trailers and announcements – so we’ll see at least a few upcoming PC games. The show will broadcast December 6 at 17:30 PST / 20:30 EST or December 7 at 1:30 GMT.

Cold Iron is made up of folks with experience across Neverwinter, BioShock Infinite, and City of Heroes. The studio’s leadership includes CEO Craig Zinkievich, CTO Shannon Posniewski, and creative director Matt Highison.

“Our background in building online worlds and taking established franchises to the next level in interactive entertainment is a precise fit with our product roadmap ahead; we can’t wait to share more information soon,” Zinkievich said in the press release.

“I am a personal fan of Cold Iron’s previous work,” FoxNext’s president of studios, Aaron Loeb, said, “and all of us at FoxNext Games are thrilled to be working with them as they create an action-packed persistent world, steeped in the mysteries of this beloved Alien universe.”

While the studios did’t announcing any specific details on the new game yet, they do emphasize Cold Iron’s MMO work and the game’s “persistent world.” There are only a handful of ways to interpret what that means, and they all seem rather Destiny-like to me. We’ll find out for sure whenever the game is actually unveiled – perhaps on December 6.