Zippy. Buoyant. Frantic. Everyone knows what a good kart racer feels like, but it’s tricky to express. Even harder is trying to recreate the kart racing experience by tweaking the background values that influence speed, drift, and a host of other factors. Yet that is what Milanese developers 3DClouds.it have devoted themselves to while putting together their well-liked kart racer in Steam Early Access. Not just any kart racer either – one that’s all about fruit. Because why not.

Related: the best racing games on the PC.

The Fast and the Furious: Avocado Drift 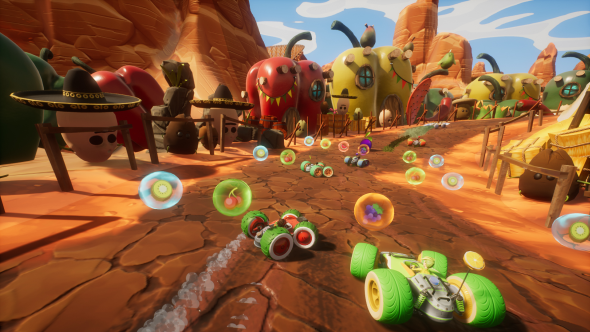 That nebulous ‘feel’ was the subject of much debate during the early development of All-Star Fruit Racing.

“Everyone, developers and users, have their own opinion on what is great and what isn’t and these opinions are never aligned,” 3DClouds CEO Francesco Bruschi tells us. “We played all sorts of racing games for hours before deciding what we wanted to achieve. Our aim was to give a fun arcade feel, with the drift being a fundamental component that shouldn’t be overused.”

To get drift right, 3DClouds started with what is arguably the most important feature: animation. They settled on a blur of cartoonish effects, designed to make the simple act of triggering drift deeply satisfying.

“These animations are played every time the vehicle enters into drift mode but this is just the visual effect,” Bruschi says. “The game handles the input value that is given to the steering control and regulates the ground grip in order to give the desired movement feeling.”

Even this attention to detail could not save 3DCloud from having to tweak drift after the game launched into Early Access, however. Remember what Bruschi said about everyone having their own opinion?

“There were two aspects that players disliked about the previous drift system,” he recalls. “The missing loss of adherence from the ground, and the ‘not so satisfying’ visual effect.”

To tackle the first issue, 3DCloud developed a new system that gave them better control of the kart’s lateral clutch – allowing them to fiddle with the proper parameters to get the vehicle sliding. And to improve visual feedback during drift, they decided to raise the kart’s wheels from the ground on one side. It is an effect that only triggers when you reach the game’s highest speed values and begin to lose grip – a warning for would-be barrier huggers.

The twang of the rubber band 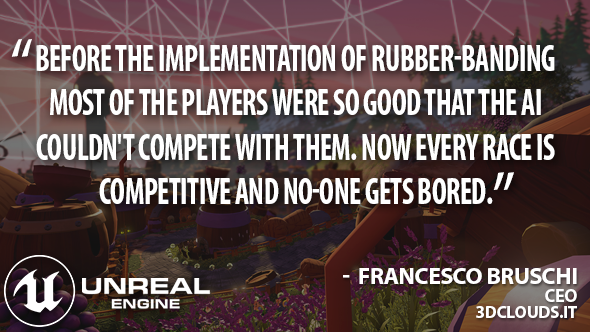 Rubber-banding – as in, ensuring racers at the back of the pack can make a comeback, rather than the MMO latency issue of the same name – is a controversial concept in driving games. But, just as Mario Kart’s blue shell evens out the contest and keeps players competitive right up to the final seconds of a race, rubber-banding functions as a necessary handicap.

“Before the implementation of this feature most of the players were so good that the AI couldn’t compete with them,” Bruschi says. “Now every race is competitive and no-one gets bored, because you need to be very good to keep a margin in first place.”

Behind the scenes, the rubber band effect slows or accelerates all players and AI – aside from whoever is in first-place – based on a specific value. The idea is to keep the pack together with as little detachment as possible, so that it always feels like a close race.

Meanwhile, AI racers vary their behaviour according to their distance from players, using boosts to catch up before launching attacks as they close the gap – “like every human player will do in a split-screen or online race.”

“My personal advice is always to keep a shield move with you and if you don’t have it, run,” Bruschi jokes. “Run as fast as possible.”

How to handle handling 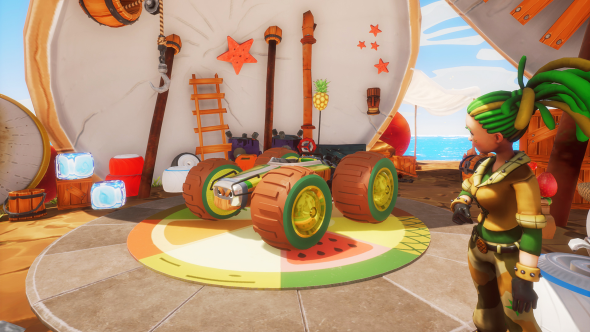 3DCloud created All-Star Fruit Racing’s handling system from scratch. More than once. In fact, they reworked it seven times before they were satisfied.

“At the beginning everything was created and tweaked in order to have a simulative experience, but we soon discovered that what we had in mind clashed with the reality,” Bruschi says. “The collisions issues were too much for us to take.”

The team next plumped for an arcade approach that brought handling some much needed stability. But they missed the overall driving experience of the simulation, and ended up splicing the two systems together.

“We discovered that the main issue was thinking [we were] able to control everything in the game,” Bruschi reflects. “Our system features all the physical properties of the vehicle but, at the same time, the kart slides a lot, resulting in a challenging and engaging driving experience.”

After a year of tweaking, 3DCloud have come to embrace the sliding, drifting, and constant motion that has come to define the nascent motorsport of fruit racing.

In this sponsored series, we’re looking at how game developers are taking advantage of Unreal Engine 4 to create a new generation of PC games. With thanks to Epic Games and 3DClouds.it.