AMD now holds ten percent of the x86 processor market. After a successful year dueling with Intel for processor dominance, the red team has now captured an important milestone and consolidated its presence in the market. Desktop, server, and mobile market share combined now makes up one tenth of computers everywhere.

There’s no denying that AMD looks strong in the Ryzen desktop CPU department. AMD’s second-gen Ryzen processors have been sapping sales away from Intel’s competing Coffee Lake processors since April and market analysis from Mercury Research indicates that desktop CPU share has increased from 12.2% in Q2 2018 to 13% in Q3. There’s still a long way to go before AMD switches places with Intel at the top, but the company is moving in the right direction.

As for the mobile market there have been mixed reports all year as to the success of AMD’s mobile division. Market analysts at Susquehanna told its clients back in June that Ryzen Mobile was a ‘no-show’, although its numbers differ notably from Mercury’s. The latest research shows sales of notebooks fitted with the red team’s best lightweight silicon are up, creeping to 9.1% of the market since this time last year when it was at just 6%.

Mercury hasn’t made public information on AMD’s server share, although we can expect single digits for AMD’s EPYC uptake for the year. We know that in Q3 2018, EPYC units sold and revenue grew by double digit percentages over Q2, and Lisa Su has consistently repeated AMD’s server aspirations: mid-single digit share by the end of 2018. 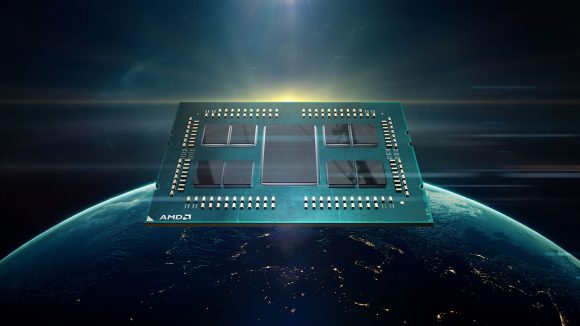 AMD’s Next Horizon event just wrapped up, reiterating yet again AMD’s commitment to data centre growth. During which, AMD finally unwrapped the next-gen Zen 2 CPU architecture. The event was intended for the suits running data centres interested in EPYC 2 ‘Rome’ processors and 7nm Vega Radeon Instinct M160 graphics cards, but that doesn’t mean there wasn’t a few tasty morsels of information regarding the Zen 2 architecture in there to whet gamers’ appetites.

After a bumpy ride over the last month, AMD’s stock is back on the rise. The company announced during the Next Horizon event that Amazon Web Services, one of the world’s largest cloud server providers, would be utilising AMD EPYC processors to power machines within its global data centres.

As for AMD’s competition, Intel recently announced a brand new server lineup, Cascade Lake, for launch in the first half of next year. Intel’s adopted the multi-chip module (MCM) design within the upcoming Xeon chips, allowing it to offer up to 48 cores. Intel’s top chip had all of a couple days in the limelight before AMD announced a 64-core EPYC chip and stole back the core crown.

The last few years have been critical for AMD. This year particularly has been one of steady growth for the company and 2019 is already shaping up to be jam-packed with new product, too. AMD Navi and Zen 2 are both expected on the 7nm process node in the next twelve months, likely sooner rather than later, and Intel must be starting to feel the heat.