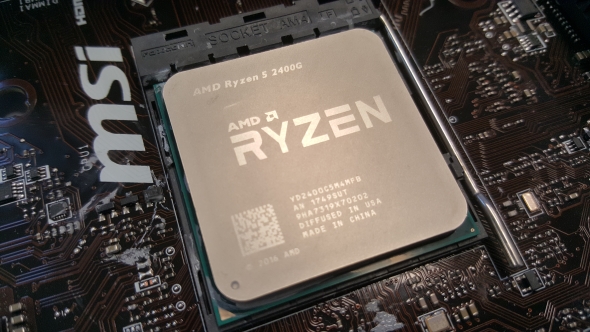 Update February 13 2018:  Turns out that it is a resurrection of the sleep timer bug that afflicted the original Ryzen CPUs. Dave has a sad face.

Yes, in all the excitement over the new Raven Ridge APUs I was fooled by Windows’ timer settings going screwy when it went to sleep on the MSI board with the Ryzen 5 2400G. Windows speeds up its internal clock by 12.5% and thus every single benchmark then sees all workloads completing faster than before.

The bug didn’t materialise when I tested the Ryzen 5 1400, so the timer issue isn’t occurring with the original Ryzen processors, just the new Raven Ridge chips. So it is something to look out for.

We’ve tested with the most up-to-date BIOS we’ve been supplied for the MSI board and it still happens. I’ve had misreporting hardware before in pre-release reviews, but they’ve never affected the benchmarking results, especially not across the board. 3DMark is also meant to catch the timer issue, so when it came back as a valid score I assumed that’s what it was. The higher temperatures and higher power draw also seemed consistent with an overclocked CPU.

Ah well, the Ryzen 5 2400G is still a fantastic little APU, with truly impressive low-end gaming performance without needing a discrete GPU. Even if it isn’t quite such a hefty, sleepy overclocker.

Original story, February 12 2018: A weirdbugfeature has appeared during our testing of the Ryzen 5 2400G Raven Ridge APU that means our chip overclocks a by huge amount when you put it to sleep. You may have seen some leaked benchmarks appear online, and yes… they’re true, it can hit 4.56GHz on air.

This bug feature is either in the darling little MSI B350I Pro AC motherboard that came as part of the Raven Ridge test kit, or the Ryzen 5 2400G APU itself. It sees one of them automatically overclocking the chip far beyond what I’ve been able to do in the BIOS, or with the Ryzen Master utility.

In my testing I’ve only been able to push the top Raven Ridge APU up to 4.05GHz using simple multiplier tweaking. I have been able to get the chip booting into Windows, and running some light gaming workloads, at 4.2GHz, but putting any serious CPU load onto it the chip falls over.

But, with the bizarre sleepy overclock, that same APU is able to top 4.56GHz and remain completely stable under full gaming and CPU testing loads. 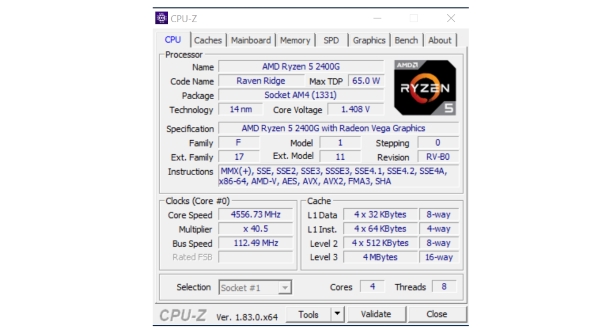 I discovered it completely by accident while testing the stability of my earlier overclock. I left the test bench to do something probably super-important, and when I came back it had put itself to sleep. On waking it up I noticed CPU-Z was reporting a much higher clockspeed because of the new BCLK setting.

Normally the 2400G runs at a base 100MHz with the multiplier helping to then create the 3.6GHz and 3.9GHz stock clockspeeds of the chip. Where it gets really weird is that neither the Ryzen Master utility, nor the MSI motherboard BIOS, allow you to tweak the BCLK.

Initially I assumed it was a mistake. Pre-release platforms often display weird results in monitoring apps – part of the fun of putting together launch day reviews – so I figured there was nothing to it. But after testing and retesting it became obvious the overclock had stuck and this mighty chip was overclocking like a hero.

It’s potentially down to the C-state settings in the BIOS I’ve disabled due to some issues I had getting 3DMark to run on the AMD test platform at the beginning. It’s also quite possible it’s the old Ryzen sleep timer bug appearing again.

But it’s completely repeatable. Every time I reboot and drop it into sleepy time mode for a heartbeat the BCLK setting pushes itself up to a heady 112.50MHz. With the x40.5 multiplier I had in place that meant it was sitting pretty at 4.56GHz when it woke up.

At that speed the performance numbers are incredible. The 2400G hits around 1,000 and 187 for Cinebench’s multi and single-threaded tests, making the $100 more expensive Intel Core i5 8600K look a little foolish. And, with a healthy 1.5GHz clockspeed on the Vega 11 GPU, the gaming performance gets mighty playable at the top 1080p game settings. You do need some speedy, pricey DDR4 memory to get the most out of the graphics cores – this Vega chip has no HBM2 to call its own – so that does affect the overall platform costs.

But it’s also possible to use the overclock with a discrete GPU in place too. That gives it a heroic level of graphics support from such a budget slice of silicon. 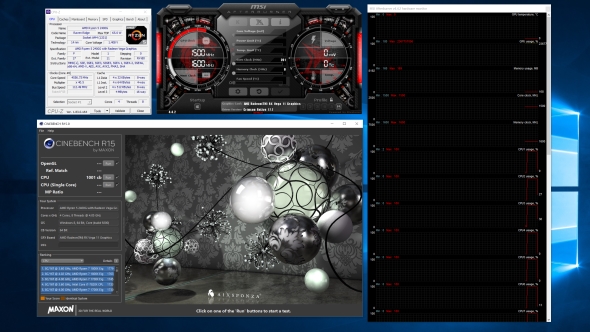 Unfortunately I haven’t been able to replicate the overclock in any other motherboard. The only one we have that allows manual overclocking of the BCLK is the Asus Crosshair VI Hero, and the pre-release BIOS update doesn’t seem to allow any sort of overclocking on our Ryzen 5 2400G sample.

Now, the likelihood is that the sleepy overclock will get patched out of the platform, but please, AMD, give us the tools to tweak the BCLK ourselves across the board, it potentially makes a massive difference to the chip’s performance.