Why can’t we have nice things? I mean, we’re good people, doing good things, so we shouldn’t be denied something glorious just because of geography. This is a global age, with vast mercantile networks, so when there’s a hot pink AMD RX 590 we ought to be allowed equal access.

But no, the Yeston RX 590 Game Ace is a China-exclusive card that we’re going to struggle to get hold of on our verdant shores. Which is a real shame because look at that hot pink cross on the shroud. Normally we have to make do with boring red and black designs, with maybe the odd green flash for the GeForce faithful, but Yeston isn’t holding back.

Even its upcoming Nvidia RTX cards are getting the hot pink treatment, with one RTX 2070 design even having an almost entirely pink shroud. To be honest I’m not that fussed on the all over design, but I’m still 100% confident the RX 590 version could be improved with a pink backplate. Imagine…

Of course the Yeston shroud (via Videocardz) also has LEDs built into it, but it’s not giving you the option to ruin the aesthetic with RGB support. No, you get a pink glow and you’ll love it. One thing it doesn’t have is any extra performance from the GPU itself. This is a straight reference design, just one that looks a whole lot sexier than the alternatives. 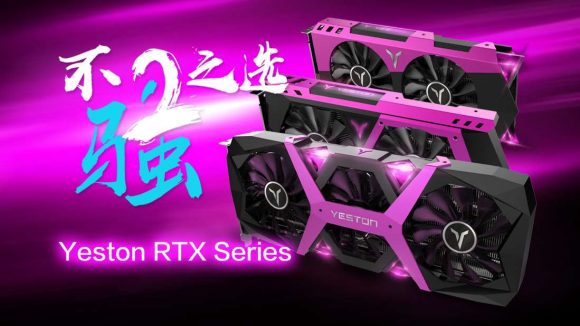 From a certain point of view. I get that some might be turned off by the slightly angular looks and bold colour pallette, but I’m getting ready to pull my GPU at home apart and perform some bad respray job to try and recreate it in my own rig. With a full pink LED glow to back it up.

Read more: These are the best graphics cards of today

The only thing we’re not entirely sure about is the name. Yeston. It sounds like the name of the perennially disaster-prone kid at school who turned up every day with a briefcase and brought his dad on field day trips wearing matching tracksuits. You know the one.