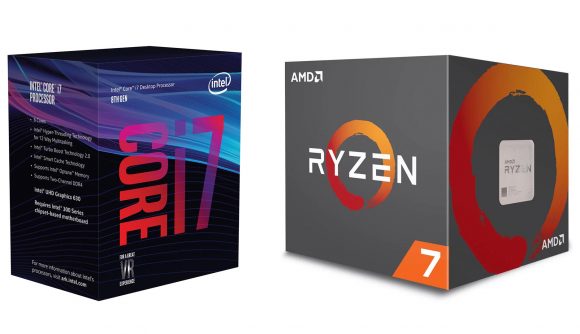 Hoping Santa will bring you a shiny new CPU this Christmas? AMD is increasingly looking like a shoo-in for the holiday season on pricing stability alone. Prices for AMD’s Ryzen 7 2700X processor have remained incredibly constant since the second-generation Zen processors first launched in April. Meanwhile, Intel’s Core i7 8700K has been fluctuating wildly, hitting new highs in October all according to data picked from PCPartPicker UK.

AMD’s Ryzen CPUs have been winning over market share from Intel since they were first introduced back in 2017, slowly gaining on the semiconductor titan in the x86 market. AMD is now believed to hold over 10% of the entire global market for x86 processors, with its desktop, server, and mobile chips all gaining momentum in the market Intel has been aggressively dominant in for the last decade.

Meanwhile Intel’s been slipping due to supply constraints, the likes of which Intel interim CEO Bob Swan has addressed directly. Some Intel Core processor prices have been increasing, whether due to actual or perceived stock constraints, and the pricier vanguard 9th Gen chips have done little to ease the crunch.

Intel’s Core i7 8700K, which launched roughly this time last year, has suffered a rollercoaster year according to data from 17 UK retailers and collated on PCPartPicker. Pricing has fluctuated wildly, from lows of £276 up to highs of £513 just over a month ago. The price increase aligns with not only the announcement of Intel’s supply constraints but the launch of the i7 9700K and i9 9900K.

Meanwhile, AMD’s top flagship Ryzen 7 2700X, across 16 UK retailers, averages near-enough £300 throughout the entire year, occasionally dropping to around £280 or increasing up to £340 on rare occasions… aside from the anomalous near-enough £2,500 price spike I think we can safely ignore.

The disparity between pricing and fluctuation is pretty clear once you take a look at the two graphs side-by-side: 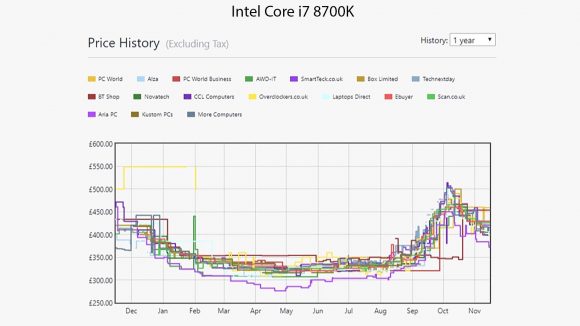 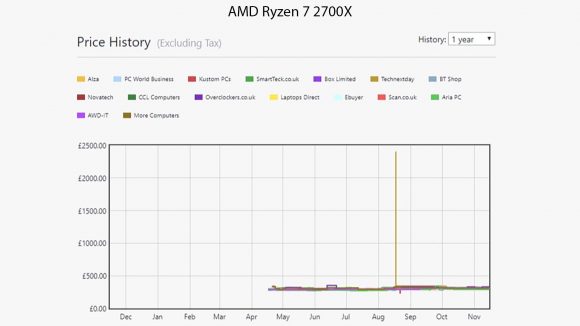 It’s worth noting that not all Intel processors seem to be affected to the same extent as the flagship i7 model from the 8th Gen. While the Core i5 8500 faces similar pricing spikes around October, the i5 8600 and i5 8400 look far more consistent year round. The whole of AMD’s Ryzen product stack tows the same consistent and stable pricing history as its flagship, however.

AMD has seemingly managed to maintain a strong supply of its Zen+ chips throughout the year. Meanwhile, Intel has had a rough time with its 14nm process, lending to supply issues and potentially even a slowdown in consumer DIY CPU deliveries while the company works on satiating server and mobile demand.