As far as we’re aware AMD hasn’t previously announced the more low-power versions of the latest Ryzen CPUs, but good ol’ ASRock has them both listed in the CPU support section of one of its B350 motherboards. Even in the few new B450 boards to be listed by Gigabyte its CPU support doesn’t list the expected new ‘E’ suffixed versions.

Not so concerned with low-power chips? Check out our pick of the best CPUs for gaming then.

The new processors should go head-to-head with the T-series CPUs from Intel, where the latest Coffee Lake  chips are touting 35W TDPs compared with the 45W TDP the AMD E-series silicon is targeting. That said, the T-series processors do allow for the TDP-down feature which lets them cut performance to fit a 25W TDP profile.

And that’s effectively how the red team is getting the new AMD Ryzen 2 processors down from the 65W TDP of the Ryzen 7 2700 or Ryzen 5 2600. As found by TechReporta while back, AMD is taking a knife to the base clock speed of the new chips with the 2700E sitting at 2.8GHz, compared to 3.2GHz, and the 2600E running at 3.1GHz, compared with the higher-spec version’s 3.4GHz.

What that’s going to do to the expected turbo speed, however, isn’t known. 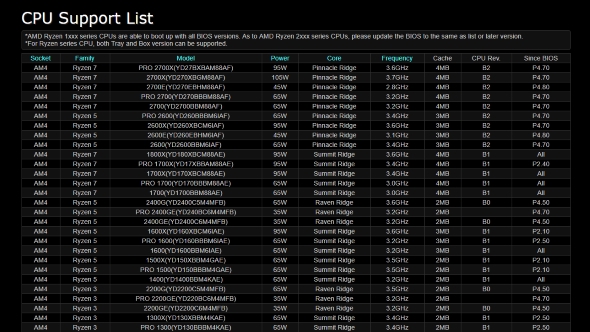 Both chips still retain the same 16MB of L3 cache as their forebears, however, with the 8-core CPU sporting a further 4MB of L2 and the 6-core with 3MB of L2 cache.

Interestingly, ASRock has since removed its originally listed support for the touted Ryzen 5 2500X and Ryzen 3 2300X processors that recently appeared in the Geekbench database. What that might mean in terms of which of the two CPU pairs will launch first is tough to say, though, with the B450 boards set to launch very soon, we’d still expect the Ryzen 3 chip to arrive before a low-power E-series range gets released.

A quick look at Gigabyte’s B450 motherboard pages doesn’t show support for any of the unreleased CPUs, so Gigabyte at least is keeping that much under wraps.