Today I have discovered a new favourite word: nontroversy. I think it perfectly encapsulates the recent noises that have been swirling around the release of the AMD Ryzen 2 processors and the discovery of something in the FAQ for their CPU warranty – using a cooler other than the one provided invalidates it.

Heatsink? Fan? Water! That’s how you should chill your chips, so check out our pick of the best liquid coolers.

For the last few years the FAQ support pages about the warranty of AMD processors has stated that your warranty is not valid if you use a processor other than the one in the box. Even if it were something AMD were actively pursuing it would be next to impossible to police; it was essentially a caveat to avoid chip replacements due to the end user jamming an unsuitable cooler on top of their processor. 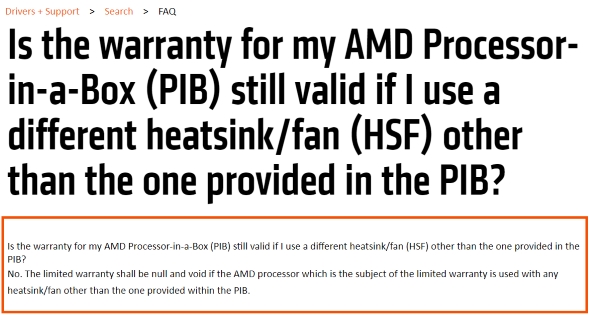 But don’t let that get in the way of a good moral panic. There were videos made claiming these were anti-consumer practices and reddit posts grumping about what a terrible thing AMD were now pushing onto their customers. Y’know a general weeping and gnashing of teeth kinda deal.

Thankfully it looks like that’s all over because GamersNexus decided to get in touch with AMD and check into their official stance on the subject and were informed that team red have now updated their FAQ pages. Now it reads:

Yes, provided that the selected HSF, when properly installed and used, supports operation of the AMD processor in conformance with AMD’s publicly available specifications. Use of HSF solutions determined by AMD as incapable of such performance or which are determined to have contributed to the failure of the processor shall invalidate the warranty.

Basically AMD have been a bit more thorough and straightforward in their wording on the matter – your warranty is fine so long as you use a third-party cooler that’s up to the task. But if AMD decide you’ve been using one that isn’t, and that it’s at least partly responsible for your dead silicon, your warranty is still boned.