MSI has unveiled its lineup of X570 motherboards over at Computex 2019, ready to take on AMD Ryzen 3000 processors once they launch in July. Each one comes equipped with a chipset fan to keep the latest in-house X570 silicon happily chugging along. But MSI informed us at the event that, as well as the 0dB operation brought over from the MSI graphics cards, the chipset fan curve can be adjusted to avoid any unnecessary noise.

It’s up a user’s discretion as to how fast, or slow, this fan will run. We asked MSI whether it could be entirely switched off but did not receive a definitive answer. My guess would be no, you can’t entirely disable the fan. Otherwise it wouldn’t be included on every board.

MSI’s X570 motherboard lineup, particularly the high-end boards, feature chunky heatsinks and cooling solutions, as do many others announced at the show. The MSI MEG X570 Godlike board will sit at the top of the stack yet again, and features a sizeable, high-coverage heatsink design, extended heatpipe from chipset to VRM, and specially designed chipset fan.

And thanks to AMD’s PCIe 4.0 adoption this motherboard can also fit up to five NVMe drives without spending a penny on third-party adapters. Three of these are on the board itself, and another two are available if you slot the included dual NVMe adapter into your machine. The company also includes a networking card in the box, which takes this mobo up to a 10GbE connection from 2.5GbE via the rear I/O.

But take one look at the Godlike and it’s evident that MSI is expecting some serious heat from these boards, which, according to AMD, mostly originates from the PCIe 4.0 connectivity for the chipset.

An AMD spokesperson also reiterated that the chipset fan on X570 motherboards will only ramp up when required.

With excessive power delivery and VRM on many of MSI’s boards – not to mention the 16-phase Gigabyte motherboard announced earlier this week – it looks like AMD’s Zen 2 construction may take well to overclocking. 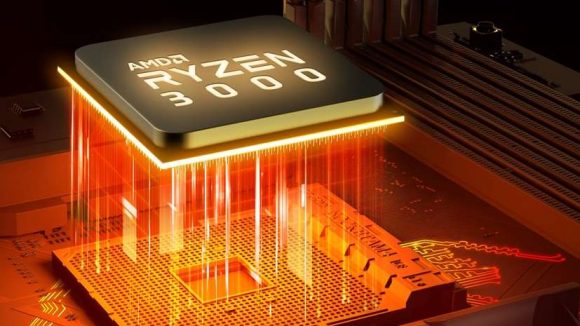 AMD told us that we can expect to hear more about Ryzen 3000 overclocking over at E3. During which the company will be holding its Next Horizon Gaming event to clear up a few things about Ryzen 3000 and unleash further details on AMD Navi – which is similary launching in July.