Gigabyte is aiming to create the world’s most powerful overclocking motherboard for the AMD Ryzen 3000 processors with its X570 Aorus Xtreme. By packing the board out with the first direct 16-phase VRM the Aorus Xtreme could well deliver the highest, most stable supply of power to the new Ryzen chips of any board out there. Because of that I think it’s important to cross your forearms in front of you to make an ‘X’ each time you either read or say ‘Aorus Xtreme,’ I believe it’s in Gigabyte’s brand guidelines.

Matthew Hurwitz, Gigabyte’s product manager for the new X570 boards, explained that as the core count of the new AMD Ryzen chips increases so does the level of power that needs to be fed to the bulging processors. But just sticking in more and more power is only part of the battle, you also need that power to be stable… and not light your motherboard on fire while it’s doing that.

The simple answer is to add more power phases to the board, but, instead of using a doubler to turn an eight-phase power design into a 16-phase mobo, Gigabyte is going for a direct VRM implementation straight from the PWM.

Okay, there are a lot of initialisations to get your head around in those few paragraphs, but basically the voltage regulator module (VRM) is responsible for taking the juice from your power supply (PSU) and feeding it into your CPU, and other mobo-mounted goodies. The pulse-width modulator controller (PWM) on the board is what regulates the overlapping timing of the different VRMs as they deliver power to the processor.

Top rodents: These are the best gaming mice around today

The more VRMs on a board, the more stable the supply of power is because the different pulses can be overlapped by the PWM so there are fewer troughs in between the points of a peak supply of energy. And a stable power delivery means a far more stable processor, which is especially useful when you’re trying to push a new chip as far as it will go. 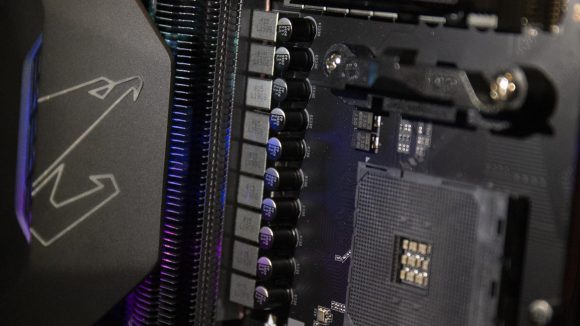 Traditionally motherboard manufacturers use a phase doubler so that an eight-phase PWM can create a virtual 16-phase power design for their boards, but Gigabyte’s TruePower VRM system contains a direct 16-phase PWM without the need for a doubler. It claims that this offers a 4% improvement in the energy efficiency of the Aorus Xtreme compared with the more-standard parallel VRM design.

Gigabyte has also promised that the minimum power design for its ATX X570 motherboards will sit at a hefty 14-phases. Now, not all will have a direct PWM design, but it highlights again that the Ryzen 3000 chips could be seriously impressive overclockers. Otherwise why go to all this extra effort to deliver such a high, stable level of energy supply?

Of course stepping up the power for a massively overclocked Ryzen 9 3900X is going to mean a whole lot of extra heat on the board, which is where the Aorus Thermal Ecosystem comes in, where “the entire board is a heatsink.” There’s the NanoCarbon Baseplate with a Fins-Array heatsink, and direct heatpipes keeping the heat moving around and away from the toastiest areas of the board.

Of course the Aorus Xtreme has the same X570 goodness as the rest of Gigabyte’s Aorus range of motherboards, namely the potential for WiFi 6 support and that all-important PCIe 4.0 connection. Well, all-important once the upcoming AMD Navi RX 5700 and Gigabyte’s “world’s fastest” SSD have been released anyways.