Much of the GPU news recently has been surrounding Nvidia’s next-gen 20-series GeForce cards, but AMD’s got a new chip coming out too and it’s going to have some serious technology baked into it that’s the equal of the Turing GPUs – xGMI.

Where the Nvidia cards are moving lock, stock, and bandwidth over to NVLink with the next-gen architecture, AMD is set to introduce its own new, high-speed GPU interconnect to the upcoming Vega 20 chip. With GPU-to-GPU connection bandwidth in the same league as the RTX card’s NVLink connection, AMD’s new xGMI cards aren’t going to be left behind in the push towards new ways of using multiple GPUs.

AMD confirmed the other day that its new 7nm GPU, the Vega 20, is still on track for delivery this year, unfortunately it’s a professional-class chip for the Instinct range of machine-learning cards and not some genuine high-end gaming chip. For a new Radeon-powered graphics card we’re going to have to wait for the AMD Navi GPUs to roll around in the first half of next year.

The inclusion of the new xGMI (inter-chip global memory interconnect) tech in the new Vega 20 specification was uncovered by Phoronix as it’s appeared in a few lines of code in the latest AMD GPU Linux drivers. The Vega 20 chip has shown up in these patches before – mostly so that pre-release testing can be done on the new cards – but this is the first time that xGMI has appeared. 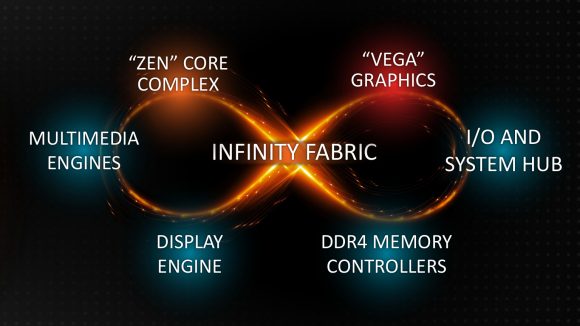 It is essentially a peer-to-peer interface building on AMD’s Infinity Fabric interconnect to allow multiple graphics chips to talk outside of the bandwidth limitations of the PCIe 3.0 interface.

Where NVLink on the announced Turing GPUs is sitting around the 100GB/s level, there are reports that AMD’s xGMI is as fast as that, and potentially even faster.

This might not necessarily mean that AMD is ushering in a new world of CrossFire gaming performance. David Wang, its head graphics guru, told us at Computex that in the professional, compute-based professional world multi-GPU support is much easier to implement than with game rendering. The xGMI appearing on a pro-level device is to be expected then, but we do know that if it appears on the upcoming Navi design sheet AMD is definitely looking far more seriously at what it does in terms of multi-GPU work on the gaming side too.

And with ray tracing and AI-powered games the talk of the town right now – both of which are compute based workloads – it would be rather interesting to see what a pair of Navi chips could deliver working in perfect harmony over a very wide interface.