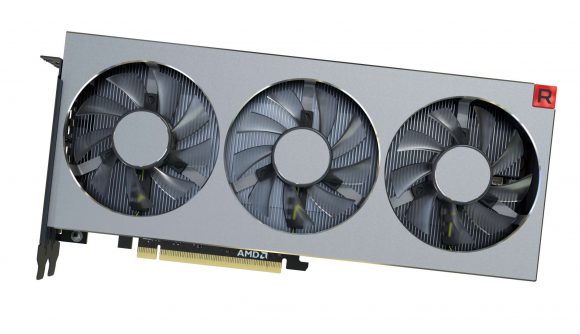 January 16, 2019 This story has been updated with AMD’s statement on stock rumours surrounding Radeon VII

Reports suggest AMD will be offering only reference design Radeon VII graphics cards at launch and that numbers may be limited. Board partners have tacitly implied that they will not be offering third-party designs at launch, or maybe ever, and that the quantity of Radeon VII is “strictly limited.”

However, AMD has now come out and countered the rumours. At least partially, anyways. “While we don’t report on production numbers externally,’ the statement reads, “we will have products available via AIB partners and AMD.com at launch of Feb. 7, and we expect Radeon VII supply to meet demand from gamers.”

AMD announced Radeon VII over at CES this year. Essentially it’s roughly a Vega gaming GPU shrunk down to the 7nm process node and sprinkled lovingly with 16GB of HBM2 memory. The extra efficiency of the new dense process node allows for greater efficiency and higher clockspeeds, and from somewhere AMD has squeezed Nvidia RTX 2080-level performance despite being a few cores shy of the original Vega 64.

Yet despite this gaming GPU launching on February 7, some of AMD’s board partners have implied they have no custom designs in the works for the “world’s first 7nm gaming GPU”. AMD’s statement also avoids tackling this question head on. At this rate, Radeon VII may be following in Vega’s footsteps in more than just silicon – it was a long while before Vega was available in third-party designs, and even then the mining boom largely made these designs redundant.

Chatting to Tom’s Hardware Germany, one Taiwanese source said “You cannot leak anything that does not exist” in regards to third-party designs. And another Chinese source said “the quantity of Radeon VII is strictly limited… not sure if AMD wants to open AIB to have an own design later”.

Read more: Need the best graphics card of the moment?

AMD’s most loyal partners will likely be selling reference designs over the counter, however. As AMD’s statement confirms. During the CES keynote, Lisa Su also told those watching that “several leading add-in board partners plan to offer the cards”. And at least this looks to be a capable triple-fan design.

HBM2 memory was determined at the time to be the root cause of packaging and supplier issues back with Vega at launch, which again could be the case with Radeon VII, or it could be down to the burgeoning 7nm process.

If stock is as short as it’s made out to be, don’t expect that $699 MSRP to stick around for long. But at least AMD believes it is ready to meet demand.