I’m a little scared. I’ve been doing maths, and that always makes me, and my numerically challenged self, rather nervous. The results? Well, they might indicate the AMD Vega they’ve been showing off leading up to SIGGRAPH could cost somewhere around $800.

Expensive, no? If that’s too rich for your blood/wallet check out our guide to the best graphics cards around today.

AMD have been taking the RX Vega on tour, showing it up against a GTX 1080-powered PC in blind test conditions. The idea being that they take two PCs, which are identical apart from the monitors, drop an AMD RX Vega GPU in one and an Nvidia GTX 1080 in the other to see which people prefer, or if they can see a difference.

At the Budapest event, attendees were informed the AMD build was around $300 cheaper than the Nvidia machine. That kinda made it sound like they were talking about the graphics card itself. $300 cheaper than a GTX 1080? Sign me up, I’ll have three. Wheeeeeee!

Except now we’re hearing how exactly those two rigs were specced, as HardOCP have had exclusive access to the test machines, recently posting a video and article about their own blind test. HardOCP decided to drop their own GTX 1080 Ti into the Nvidia machine, but both came sporting 16GB of DDR4, running at 2,666MHz, and a Ryzen 7 1800X, all on a Windows 10 64-bit operating system.

Both setups were shipped directly from AMD, after the blind test roadshow, so it seems pretty likely that they were the exact same setups from their recent Radeon RX Vega events. 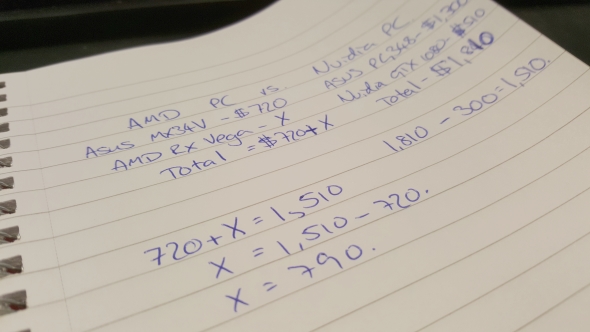 The scary maths, however, comes from the two monitors that have been used in the blind tests. The AMD machine is running an Asus MX34V FreeSync screen and the Nvidia PC an Asus PG348 G-Sync display. The FreeSync monitor costs $720 and the G-Sync panel retails for $1,300. The cheapest GTX 1080 I can find at the moment is this $510 Gigabyte version over at Newegg. So, with everything else being the same, we can discount the other component costs, making the total relevant price of the Nvidia machine $1,810 at best.

If the AMD rig is $300 cheaper, that puts it at $1,510. Which in turn means, if you do a little light algebra where X is the cost of the RX Vega, and we subtract the cost of the FreeSync monitor, you get a $790 sticker price for the AMD graphics card.

The same performance as a GTX 1080 for another $300-odd more? That’s going to be a mighty tough sell for AMD, no matter how much you want some HBM2 in your life. Though, of course, my maths could be entirely wrong…