AMD have today launched their latest Ryzen Threadripper chip, the 1900X, a massive octa-core CPU, with 16 threads. Now, where have we heard that before? Oh yeah, the Ryzen 7 1800X had eight cores, is a lot cheaper and, according to AMD, has better gaming performance too.

The AMD Ryzen Threadripper 1900X is a $549 eight-core chip, with their simultaneous multithreading (SMT) goodness in place to give it the full 16-threaded beans. It’s got a base clock of 3.8GHz, with a 4GHz boost clock, and if there’s any thermal headroom in your system it can squeeze another 200MHz out of the silicon and potentially hit 4.2GHz. 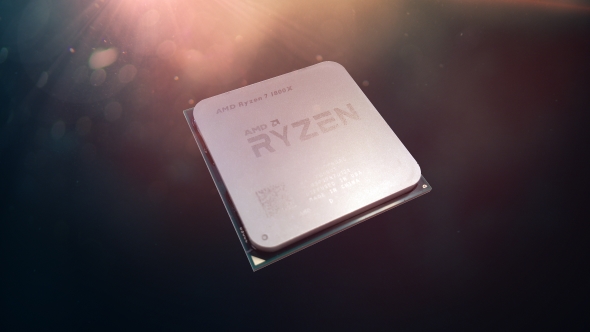 That all sounds lovely, but AMD released their inaugural Ryzen range of processors back in March with an eight-core chip with similar clockspeeds. So, what can the Threadripper version deliver that its little brother can’t? It’s all about the platform: the Threadripper platform allows all the CPUs in the range to run with 64 lanes of PCIe 3.0 connectivity, for all your millions of GPUs and NVMe SSDs, and supports quad-channel memory.

But it’s no gaming chip. In AMD’s own benchmarks they’ve got the Ryzen 7 1800X outperforming the 1900X in legacy DirectX 12 and DirectX 11 games. Interestingly, that gaming performance was measured using an Nvidia GTX 1080 Ti card, not an AMD RX Vega 64. Maybe even AMD’s testers are struggling to get hold of them… 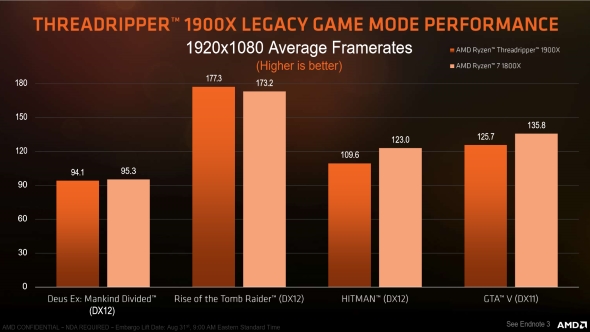 The laggardly frame rates are a bit of a shame considering the 1800X wasn’t exactly a performance hero in that regard itself. But this isn’t a setup that ought to really be of much interest to gamers – the AM4 platform, with a 16-thread CPU is already great value if you want to do some light game streaming action.

When the cheapest X399 motherboard – with the frighteningly delicate TR4 socket designed to house these massive CPUs – is some $340, you’re looking at around $1,000 just for the chip, motherboard, and memory alone. You’re going to really need those extra PCIe lanes and quad-channel memory to make you want to choose this 1900X eight-core over the much cheaper 1800X.

If you’re already spending big on the high-end Threadripper platform then the chances are you’ve got something serious to do with your PC (y’know, aside from the super-serious business of gaming) and, in that case, the 12-core 1920X chip will be a much more meaningful upgrade over the straight octa-core Ryzen.

So yeah, move along, gamers. Nothing to see here.