The AMD RX Vega was initially expected to be the chosen one when it came to GPU cryptocurrency mining. Rumours of 70 – 100MH/s compute power were enough to get avid miners ready to jump on the Vega bandwagon. Unfortunately, when Vega launched, numbers weren’t as high as expected. Hash rates were especially low in comparison to Vega’s massive power draw.

If you’re feeling lucky these are the best graphics cards you can actually buy.

As a result, miners turned back to the old favourites of AMD’s polaris-based GPUs rather than attempt a Vega-based mining rig. For gamers, this meant miners weren’t snapping up all their brand-new cards as expected. Fantastic! Finally, a GPU with no availability issues… actually, never mind. Goddamn price hikes.

Well, all is not lost for Vega’s mining potential, much to the chagrin of gamers everywhere. A Reddit post made by S1L3N7_D3A7H claims to be hitting 43.5MH/s on RX Vega 64 Ethereum mining, while only running at 130W total power draw. This puts the card well into the golden range of hash rate/power draw ratio that miners crave for profitability of their rigs. AMD’s polaris-based RX 480, a popular choice for gamers and miners, manages a hash rate of around 25MH/s, however the initial costs are much lower. 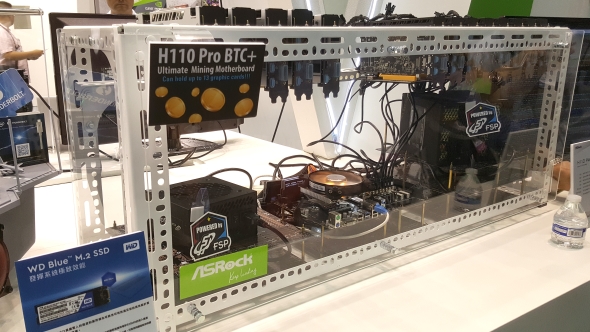 The results that this Reddit user found have not yet been replicated, with similar setups only managing the 43.5MH/s hash rate at a much higher power draw. With more accurate electrical monitoring equipment, 130W may prove to be a little out of reach. Still, the numbers are looking up for Vega’s mining prowess. Once these cards gather some speed in the mining community, miners will be looking to capitalise on their earnings with the sort of custom BIOSes that push the card to their absolute maximum for mining potential.

RX Vega 56 is looking likely to also deliver a similar mining performance, and with that in mind, if you were looking to pick up the latest AMD Vega-based card, you best get moving quick. RX Vega 56 is potentially going to offer an even better price/performance ratio for cryptocurrency mining, and that’s bad news for gamers.

Unfortunately, it’s not looking like the plague of shortages hitting graphics cards will let up anytime soon, with price increases for GDDR5 memory also expected to hit costs for graphics cards at retail later in the year.

Raja Koduri, head of AMD’s Radeon Technologies Group, has been defending the Vega product launch on Twitter recently. In doing so, he let slip that the Infinity Fabric within Vega is optimised for server usage, and that consumer-optimised versions of this tech will launch in the future. Vega seems to be less and less aimed at gamers as time goes on, and miners are certainly a cash cow that AMD will want to tap into.